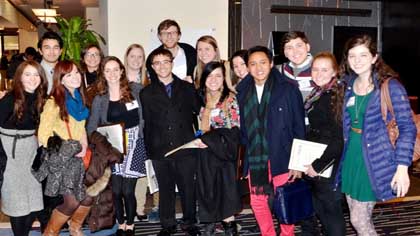 A year full of hard work and good reporting paid off for the Loyola Phoenix. The paper’s editorial staff and student writers left the Illinois College Press Association (ICPA) convention February 22 weighed down by some hefty awards.

The weekly paper was judged against other non-daily college papers at schools with more than 4,000 enrolled students and took home 8 awards, four first-place and two second-place awards along with two third-place honors.

“It completely and totally blew me away,” said Sport Editor Nick Amantangelo, who won first place in both the sports feature and sports news story categories. “I’m so proud of how everyone did. We have fun, and it’s great to see that us having fun has turned into some pretty prestigious awards.”

Since Amantangelo took over as editor of the Sports Section at the Phoenix, he’s made a concentrated effort to amp up the level of writing, said fellow sports writer and senior Joe Flaherty.

Flaherty earned second place for one of his sports feature stories, but as to which one, the journalism major said he has no idea. He did admit that he was pleasantly surprised when Amantangelo sent him a text saying that he had won.

The newspaper’s design got a facelift too over the course of 2013. In the past, section editors were responsible for their own layouts, but the addition of Design Editors Carlin Coffey and Adilla Menayang has helped create a strong visual presence throughout the Phoenix.

Menayang worked with Closer Look Editor Susie Moskop to create a layout that won them first place for feature design.

“Whenever I design anything, I try to imagine that some organization or association chose our paper random and used that to judge it,” said Menayang, a senior journalism major.

For many of the student reporters, these awards are not only a nod to the solid work they produce but a confidence booster.

Extracurriculars are where students can get an idea of what they want to do, Brown said. Brown attended ICPA conventions during her time on the student paper at Illinois Wesleyan.

“I think having this award would make people take my resume seriously for design,” said Menayang. He choose to major in journalism but said he couldn’t leave behind his longtime passion for design. “It proves that you don’t need a specific degree.”