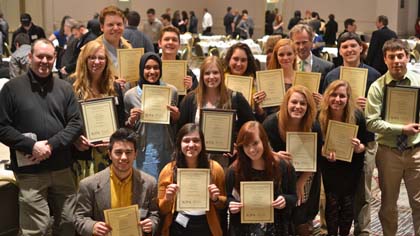 The staff of the Phoenix at the Illinois College Press Association 30th Annual Convention.

Story Courtesy of The Loyola Phoenix
After an award-winning weekend at the 30th annual Illinois College Press Association convention, The Phoenix took home 16 awards on Feb. 23 in downtown Chicago. The staff took third place in the general excellence category, which ranks non-daily newspapers with a student body over 4,000.

The Phoenix took home five awards in the open division, which compares all schools regardless of student body size or frequency of publication, from more than 30 schools across the state of Illinois for their work during 2012.

The Phoenix took home nine awards in addition to general excellence in the non-daily 4,000 plus category, which evaluated newspapers published less frequently than daily with a student body greater than 4,000.