Photography has many responsibilities. Among them, it should seek to start conversations, spark emotions or feelings, inspire and educate. This is exactly what internationally-acclaimed photographer Sandro Miller said he wants his exhibit at the School of Communication (SoC) to do.

“If you don’t look at a piece of artwork or a group of photography and begin to think and wonder, and be able to start an intelligent dialogue with someone about the work, then I guess I haven’t done my job,” said the photographer, who works professionally as Sandro. “I want people to really be able to go deep in their hearts and begin to feel things.”

Sandro will be displaying photographs that span a 25-year history of his personal work in an exhibit at the SoC called “Seen, Unseen,” which will debut Thursday, March 21 from 5:30 to 7 p.m. The photographs in the exhibit will be a collection of work that has been previously shown in exhibits, or “seen,” as well as photos that have never been displayed, or “unseen.”

“I want to raise a little bit of awareness to some of this work,” Sandro said. “‘Seen, Unseen’ is brand new. I only put a few pieces in of each project, but I like to test the power of the imagery and there’s not a better way of doing that than having them displayed and getting reactions from a lot of people.”

“Seen, Unseen” will include Sandro’s well-known “American Bikers” and “Cuban Faces” portraits, as well as “Atropa,” “Massa” and his new “Peering In: Photographs of an Overstimulated Society.” The work in the exhibit is either of portraiture or images about human bodies.

Seven photographs from the ‘American Bikers’ series, some of Sandro’s oldest personal work, will be displayed in the SoC.

The inspiration for this series came in 1989 when Sandro lived in a suburb of Elgin, Illinois, where a biker rally took place each year. These bikers would ride and raise money for Little Angels, a facility that housed severely handicapped children. 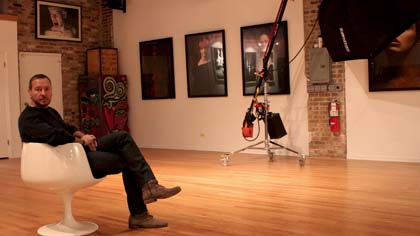 “I went to one of these fundraiser days at Little Angels and I saw these big, burley, tattooed bikers interacting with these children and it almost brought tears to my eyes. Here are people who you would never expect to have an exchange of feelings for these children and they were loving them, and they were taking care of them and they were raising big money for them,” Sandro said. “It just changed something in me. I was really used to what Hollywood had made of bikers and the stories of the Hell’s Angels. You really began to think that every biker was a Hell’s Angel and that’s totally not the case at all.”

Regardless of what the audience may think or feel when seeing the “American Bikers” series, Sandro said he wants the photographs to start a conversation.

“Maybe [people] start talking about ‘Easy Rider.’ Maybe they talk about the portraits that were done by Irving Penn – of Hell’s Angels. But there should be a dialogue that gets spoken there,” he said.

In addition to the biker series, seven of Sandro’s well-known “Cuban Faces” photographs will be displayed on the first and second floors of the SoC.

“‘Cuban Faces’ is a haunting study of the faces of Cuba beaten down by the sun and poverty under a tough Communist government,” Sandro wrote in a statement about the exhibit. “The fear of my own mortality was awoken during these sessions. Stories of hardships can be read between the aging lines of these sculpted faces.”

Another series, “Atropa,” can also be seen as portraits showcasing the wear and tear of human bodies.

Sandro wrote in his statement that the word “atropa” derives from the word “atrophy,” which carries the meaning “to weaken or waste away through disuse or the effect of disease.” He added, “The image takes on a cancerous feel, deteriorating, being eaten away, distressed.”

While some of his photographs highlight the body’s beaten down and deteriorating effects, Sandro’s “Massa” series emphasizes something quite different.

“The work itself for me was about landscapes – about building these beautiful landscapes from the body,” Sandro said. “And without explaining to people what they are, I like to just see their reactions.”

“Massa,” the Italian word for “mass,” is a series of photographs of large men and women taken from beneath a Plexiglas table.

“The body adheres to the glass and just kind of forms these beautiful shapes and it looks like peaks and valleys,” Sandro said. “It reminds me of flying an airplane over the desert at sunset, where you see shadows and highlights, valleys and hills. It just becomes very textured. So that’s what the shoot really became about – landscapes.”

Sandro began taking photographs of people on Plexiglas about 10 years ago when he was hired to shoot portraits of top executives of a shoe company. After finishing the shoot, Sandro said he went to bed that night thinking there must be something else he can shoot other than the executives. He then began taking pictures of dancers, specifically the Joffrey Ballet dancers, on top of the Plexiglas.

“After I shot the Joffrey Ballet dancers, I wanted to expand the work, and I started thinking about what would happen if I shot bigger bodies on this,” Sandro said. “So I reached out to this wonderful club called the Big and Beautiful Club and it was a self-help group of people working with their image.” 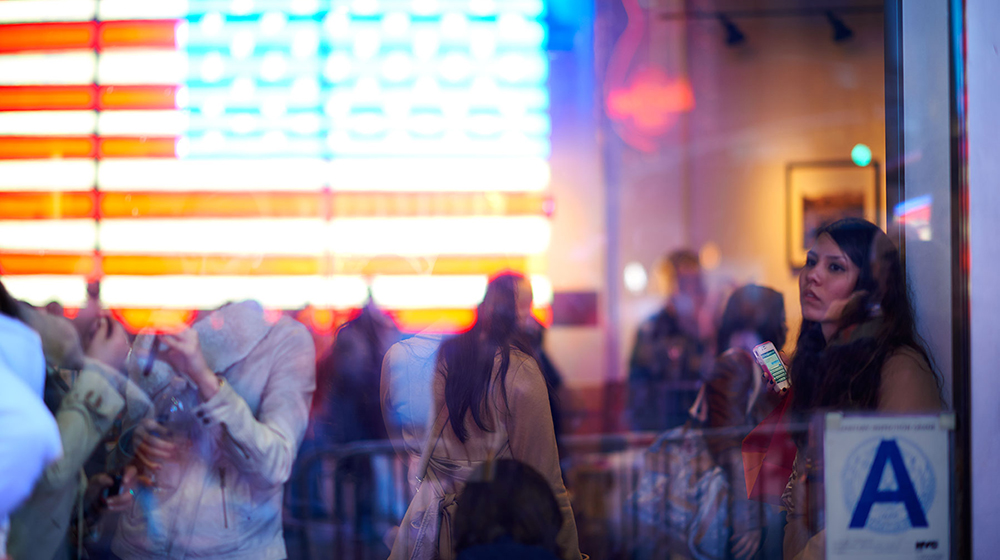 He said one woman from the club came out to do the shoot and broke down crying. “She said she felt completely released of so much pain she had been carrying with her,” Sandro said. “She said, ‘I never in a million years would have ever thought of being nude in a photo shoot with my body. And the work that you’re doing is so beautiful that I feel free of what I’ve been carrying for such a long time.’”

After doing the photo shoot with this woman, Sandro said about 20 more group members from the club wanted to have their photos taken on the Plexiglas.

“So it turned out to be a really beautiful, healing process for these people,” Sandro said.

Finally, Sandro’s new “Peering In” series will highlight not only people, but also the overstimulation of societies surrounding people. The series developed about four or five months ago when Sandro was shooting in New York City.

“I began to see these amazing reflections in windows and along with those reflections came the intensity of busyness, of commercialism [and] of in-your-face advertising,” Sandro said. “I started getting this somewhat uncomfortable feeling of overstimulation.”

Three photographs, one from New York City and two from Tokyo, Japan, will be displayed in the SoC.

“What happened was this intense complexity of imagery that came together that looks like it was put together digitally, … but that’s not what happened at all. It’s all what happens in front of us,” Sandro said. “If you were to take the moment and stop action, for a second you’d be able to study exactly how much we have going on.”

These three photographs are just the beginning of Sandro’s exploration into the “Peering In” series. Although Sandro said the series will likely be a four- to five-year project, he added that his projects never really stop, but are ongoing.

“I don’t think I ever stop shooting,” he said. “You want to kind of cover the history of a certain project or subject and I don’t think it stops until you’re done, and that means six feet under.”

With all of these photographs showcased and displayed for the Loyola community, Sandro said he hopes that he will inspire and allow his photographs to educate students.

“We don’t know what a lot of the world looks like without photography. It’s photography that’s the big educator,” Sandro said. “And I hope that students walk away with the feeling of being educated – that they, too, can become educators of the world.”

To RSVP for the free debut of the exhibit, please visit: http://seenunseen.eventbrite.com/. 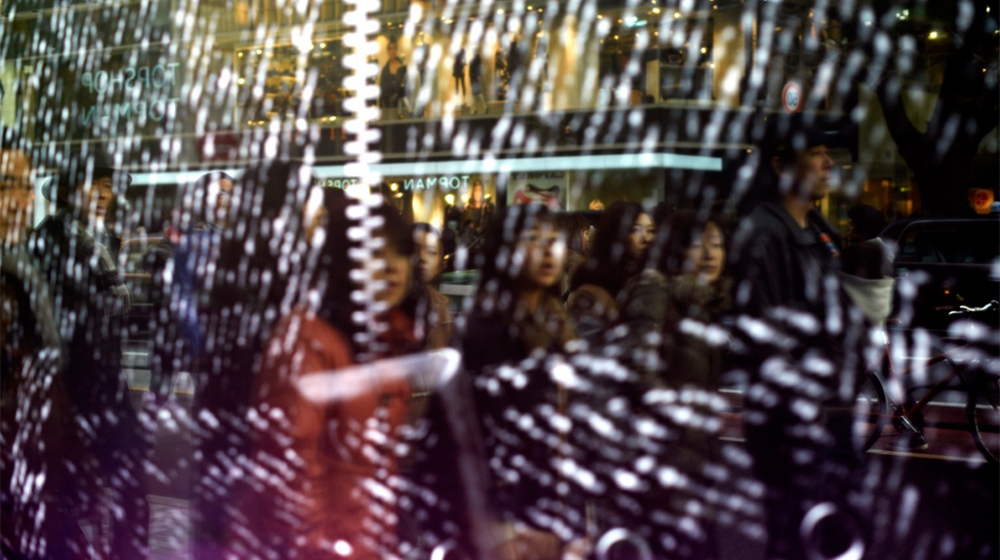