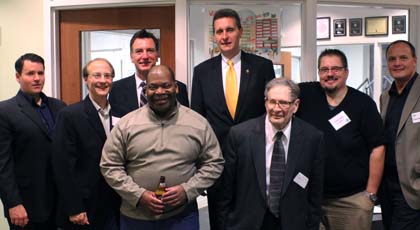 Did video kill the radio star? WLUW’s Radio Reunion and a panel on the future of radio Saturday night proved the radio stars are alive and well and there is still room for the next big name on the airwaves.

Torey Malatia, CEO of Chicago Public Media and manager of WBEZ, Kris Kridel, award-winning journalist for WBBM and Danielle Gunn, WLUW’s station manager spoke to radio alumni, students and members of the community about their expectations about what lies ahead in the changing media landscape.

“Everybody has not only a radio, but radios, plural.” Malatia said. “Yet we see a tremendous fear, not unwarranted, that somehow we may have missed the moment for radio success.”

Malatia pointed to massive media companies like Cumulus and an increase in the use of programs like Pandora or Spotify to be the reason for all the worry. However, the enthusiasm and rich history of radio at Saturday night’s event showed that though they may be warranted, perhaps the fears of broadcasters are misplaced.

While bigger media companies make it tough for independent stations to remain competitive, the panelists agreed that no matter what, they remain relevant.

“As long as radio stays local and portable and personal, radio is not going anywhere,” Gunn said.

Personality is what seems to be missing among the radio replacements simply because sites like Pandora use algorithms or “robots” to select music. There’s no banter or sage music advice on the John Mayer Pandora station. There’s no lively, familiar voice and that, Gunn said, makes radio irreplaceable.

“The reason for that is radio unlike any other media is more than just entertainment or information; it’s company,” Gunn said. “You want to be able to turn on the radio and just trust that other guy that’s at the booth to pick out some good music and show you some new things.”

Kridel said that spoken radio broadcasting is another extremely important factor that just can’t be exchanged for a podcast or an iPhone app.

“You can get in your car and make your own radio station with the music that you want with Pandora. There are apps that you can download for traffic and weather information but if there’s a big breaking story, you need us,” Kridel said. “We’re always there and people know that we’re there.“

Though the panelists were optimistic about the future of radio, they agreed that changes needed to be made in order to keep up with new technologies and programs that have the potential to make traditional radio a thing of the past.

“The question becomes, can programming change and rekindle interest in what is still a push technology of getting information out to mass audiences in a world where the excitement has been largely about user-controlled technologies,” Malatia said.

Malatia, Gunn and Kridel all agreed that using social media to promote radio programming is a key component to staying in the game. However Malatia stated that radio needs a better system to make sure that the programming that is provided on the airwaves is really what people want to hear.

“We don’t have a way of knowing what people’s attitude is toward the work that we all do,” Malatia said. “That is, I think, very difficult when it comes to programming in such a way as to build a bigger audience because it’s not a matter of not driving people away; it’s about doing things that actually attract surprise and delight.”

“It’s a fantastic operation compared with what we had to work with in the past,” Danna said. “They’re doing great work.”

While the station has had several names since it’s inception, John Kosiba, class of ’84 said that the station has maintained it’s core function; teaching, experience and fun.

“You couldn’t miss a beat and we had so much fun together,” Kosiba said. “It was a great way to do it because so many people came out of that program and they were ready to get a job in television or radio.”

Kosiba didn’t pursue broadcast journalism himself but John Canellis, a WLUW alumnus and well-known Fox News sports anchor did. So did Joe Starkey, longtime sportscaster for the San Francisco 49ers and several other professional teams.

Even though Kosiba ended up straying from broadcast, he said that his
experience with the station had a lasting impact.

“Even if you don’t go into radio it really prepares you to go into the real world,” Kosiba said. “To this day, I can speak to any person about any topic and that was because of the professors and the Communication department as well as the radio station.”

Fellow member of the class of ’84, Rob “Swarz” Swarczewski said that Loyola’s radio programming was dominant during it’s early days.

Danna said that the modern atmosphere in radio makes the challenge for current students and faculty far greater than during his time with the station.

“The station will have to keep up with the times and the changes and to be honest with you, I’m glad I’m not the one running it anymore,” Danna said. “At the time we were competing with college radio stations and now you’re competing with the world.”

But according to the current station manager, Gunn, that’s not to say that Loyola students aren’t up to the challenge.

“I’m very privileged. I get to work with young people who are optimistic and excited about radio and every day we’re coming up with new ideas to reach our audiences,” Gunn said. “It just takes a little bit of adapting but I think radio will always be there.”