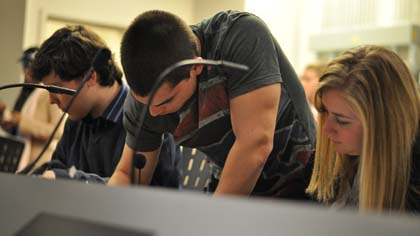 Student-run media provide the opportunity to take what is learned in the classroom and put it to practice. By operating as self-sufficient organizations, student-run media allow students to sharpen their skills, make mistakes, learn from them and produce something worthy of recognition.

One School of Communication (SoC) organization, Rambler Sports Locker, consists of about 15 to 20 students who regularly brainstorm stories, write scripts, shoot, produce and edit their own 15-minute sportscasts, which air on YouTube every Thursday.

“When you do an assignment for a class, you do what your professor wants,” said senior Stephen Manney, who has been the producer of Rambler Sports Locker for the past year-and-a-half. “But in student-run media, you can do whatever piece you want to do … It lets you hone your skills in what you’re interested in, and gives you the opportunity to work on what you want to work on, as opposed to what you’re assigned.”

“It’s the absolute greatest tool for learning the ins and outs of broadcasting at this school,” he said.

Because the show is produced in the SoC’s convergence studio, students work in a setting with similar technology and equipment used in real newsrooms.

“The best part is that we get to use the equipment,” said junior Megan Carabelli, current co-assistant producer and next year’s co-producer with Flaherty. “We get to experience working in a studio with high-tech equipment that some local studios in Chicago don’t even have.”

However, much of the work is done outside of the studio. Throughout the week, each student has a specific assignment – to cover games, shoot and edit video packages, write scripts and prepare to put it all together on Thursdays.

The show covers mostly Loyola sports, but also presents segments on national sports. It recaps games, showcases a discussion panel, and features the university’s different sports teams, players, coaches and the staff that work with them.

“It’s always about the stories,” said Ralph Braseth, the SoC’s student media manager and an advisor of the Rambler Sports Locker. “I try to help them understand that it’s not always just stories about the stars … They do a really great job of capturing the fact that most of our athletes wouldn’t be playing at a lot of Division I schools. They’re here because they’re students first.”

Braseth — along with Keith Kimmons, the SoC TV studio manager, and Jessica Brown, a SoC professional in residence — has helped guide the Rambler Sports Locker to becoming a fully student-operated production. 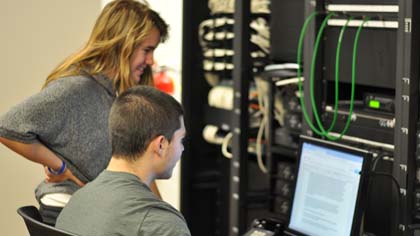 “One of the things I’m really proud of – and it took a long time to happen – is that they are stand-alone now,” Braseth said. “They can do their show without us, we just [offer] our comments after the show.”

However, an important part of learning from hands-on experience is making mistakes.

“Everyone’s bound to make a mistake, but you come back and you just get better,” Flaherty said.

Braseth added, “I’m doing a standing ovation in my mind … when they mess up big time, because there’s never been a better lesson you could learn in your whole life, and I refuse to rob students of those educational moments.”

Since the show’s beginning in spring 2011, students have become more serious about the production and more efficient in their work.

“It works a little like a factory, where we all know our parts and do them, and it all comes together at the end,” Manney said. “On a week-to-week basis, I know we’re going to put together something of quality. The caliber of our shows is a lot better now.”

Not only are the shows better, but they have also gained more recognition at the university, according to Carabelli.

“We have a lot more visibility in the Athletic Department,” she said. “They know who we are now. They are familiar with us, since we’ve interviewed basically every coach and a majority of the players on all of the teams.”

Students and the advisors of the Rambler Sports Locker said they hope to gain visibility on a much larger scale within the next year. They are aiming to get a spot on one of Comcast’s cable channels, but in order to do so, the students will need to shoot a 30-minute show.

“I fully expect us to be doing 30 minutes by Christmas,” Braseth said.

Manney said the extra 15 minutes could help expand the show and make it even better.

“Being capped at 15 minutes is really limiting,” he said. “With more time, it could give us more opportunities to showcase our skills. It’s a little bit of pressure on everyone, but when you have more pressure, you get your work done and people usually respond well to it.”

While many of those who are involved in Rambler Sports Locker are SoC students, there are no requirements for getting involved in the organization. Anyone who is interested, regardless of year or major, can stop by the convergence studio at 4:30 p.m. on Thursdays.

“My motto is, ‘You don’t have to have talent or experience; that’s what you get when you come here,’” Braseth said.

He added that any time an interested student walks into the studio, everyone stops what they’re doing and gives the student a standing ovation. 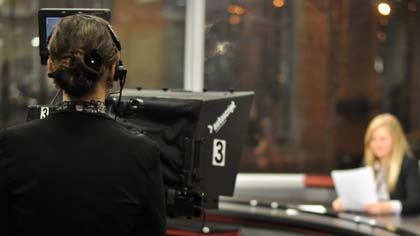 “I insist that people remember what it was like the day they walked in – and they do. Then we put [the student] to work immediately,” he said.

To learn more about the Rambler Sports Locker, visit Facebook.com/RamblerSportsLocker or YouTube.com/LoyolaRSL.