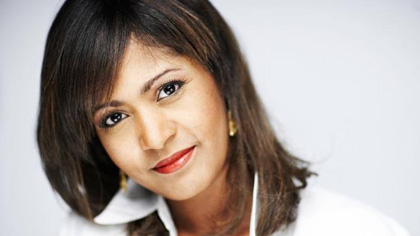 Robyne Robinson,’83, has had a diverse career path since she graduated from Loyola. Her resume includes TV anchor, director of finance, artist, and candidate for lieutenant governor of Minneapolis. Currently, she is the arts and culture director for MSP International Airport in Minneapolis, Minnesota.

During her time at Loyola, Robinson kept a full schedule. She said that while she had a lot of fun at Loyola, her time was very career and academically driven. She carried 21 hours each semester, was an editor for the school newspaper, and was on air for WLUW.

Her senior year at Loyola, she got an internship at Channel 5 in Chicago. “I put in a lot of extra hours at Channel 5.” she said. “I really wanted a career in TV.” She was willing to spend more hours there than her practicum required, and this eventually lead to a full time job at the station after she graduated. She said she didn’t want to take time off in between school and her career. “I was working, and that was really important to me. I wanted to work in my career.” Robinson said. Her role at Channel 5 then lead to a full-time position.

She has had an extensive anchoring career in several markets. Her longest tenure at a station was as the senior anchor at the Fox news station in Minneapolis for almost 20 years. She left that job to run for lieutenant governor of Minnesota, and is now in her current role at MSP International Airport.

Robinson credits her time at Loyola for preparing her for her different roles. “I had amazing teachers that had real world experience in broadcasting and in print. Having people who knew what they were talking about really paved the way for me being in the city of Chicago.” she said. She remembers one teacher in particular, Ed Rooney, who taught reporting. “He was really one of those old newspaper vets” who had worked at Chicago Today newspaper and the Chicago Sun-Times she said. “He didn’t just give you the book- he gave you what it was like to be a real news person.” She said that her time at Loyola really made her feel like the world was hers to go and get. “I’m a very lucky girl, everything I’ve said I wanted to do in my life, I’ve done it.”

Loyola also shaped how she sees her surroundings. She said that attending a Jesuit school “makes you question the world around you and see it in a different perspective, from both secular and non-secular perspective.” she said. “I think it makes you a stronger person. I think you’re more of a humanist, I think you look at the world not just through one perspective but through many lenses.”

Robinson said transitioning from being an anchor to her position at MSP has been pretty seamless. She is known as a supporter of the arts and a philanthropist in Minneapolis. Her existing connections with artists in the community have been a huge benefit in her role as arts and culture director.  She also owns an art gallery, and is an artist herself--she has her own jewelry line which is sold around the world.

Robinson said that her favorite part of her job is that “it’s art, every day.” She said that in 21st century airports, the arts a very important part of the traveling experience. She appreciates how allows her to do things that haven’t been done before -- like opening the first airport film screening room in the nation.

“The Jesuit school experience teaches you that you can do anything that you want, but in doing that you have to be very mindful of the world around you and what you’re contributing, and how you can make it a better place, and I think that way every day.” she said.