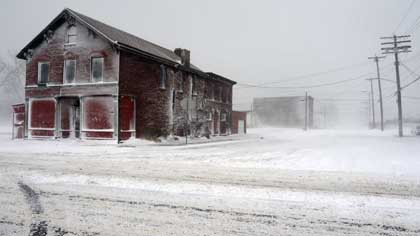 His shots of boarded-up houses and abandoned factories tell the story of hard times, but it’s Jerome De Perlinghi’s photos of Rust Belt residents that carry the weight of the recession.

“It was important to me to put the people right in the middle of the sights,” said De Perlinghi, a photojournalist and Loyola School of Communication (SOC)  adjunct professor. “Very few have photographed the people.”

De Perlinghi’s “Rust Belt Cities” exhibit opened March 12 and will be on display throughout the SOC building until August.

The Belgium native came across the idea for the series when French daily newspaper Liberation sent him to work on a story about foreclosure in Slavic Village, Ohio, in 2008.

“That was the first time I was close to a situation like that,” said De Perlinghi. His workload was slowing down too. “So I decided to do this project for myself.”

Over the course of three-and-a-half years, armed only with one camera and lens, De Perlinghi crisscrossed the Rust Belt, visiting one city per month. He photographed 17 cities in total, all former industrial giants like Detroit, Buffalo, N.Y., and Toledo, Ohio.

The project means any number of things to De Perlinghi. He explained how he tried to show the different faces of society through his portraits. At the same time, the photographer said he was left wondering how things could get to the point where they can’t be fixed.

“There’s a certain honesty in my photos, and I think people are drawn to that,” he said.

For SOC Event Coordinator Meghan Ashbrock, there was something buried beneath the forlorn landscapes.

“There’s a good juxtaposition of the hopelessness and hope,” said Ashbrock. “It’s the people that show the hope for the revival of these areas.”

In the past, the photos displayed in the SOC have told stories from all across the country. “This one is a little closer to home,” said Ashbrock. “Everyone has a story or a relative – so many of us were affected,”

“There’s a second life for some of these places,” said De Perlinghi. Certain areas gave De Perlinghi hope, he said. He cited Pittsburgh, Pa., and how the city has revived itself with some good sports and a thriving nightlife.

Still, he is hesitant to say all of the hard hit areas can make a turnaround. De Perlinghi said that at least he’s done what he can do: share the story.

“You always hope it makes a difference, but I’m not foolish enough to believe it always will.”

But change won’t happen without someone telling the story. That’s part of what De Perlinghi wants students and others to take away from these photographs.

“You can do it too,” he said. “All you need is a really good pair of shoes and a camera.”

Admission to the exhibit is free and open to the public.