More than 20 noted speakers and panelists discussed a variety of topics centered on ethical behavior in online and digital environments at the seventh annual International Symposium on Digital Ethics at Loyola University Chicago.

More than 300 people, including students, faculty and international researchers and scholars, attended the October 13 event hosted by Loyola’s Center for Digital Ethics and Policy.

“I heard nothing but positive comments about how well the conference was organized throughout the day,” said speaker Jo Ann Oravec, information technology and supply chain management professor at University of Wisconsin at Whitewater.

The symposium featured speakers Dr. Cathy O’Neil, Ph.D. and MTV’s “Catfish” Yaniv ‘Nev’ Schulman, who each discussed their area of expertise and its relation to ethics in a digital world. 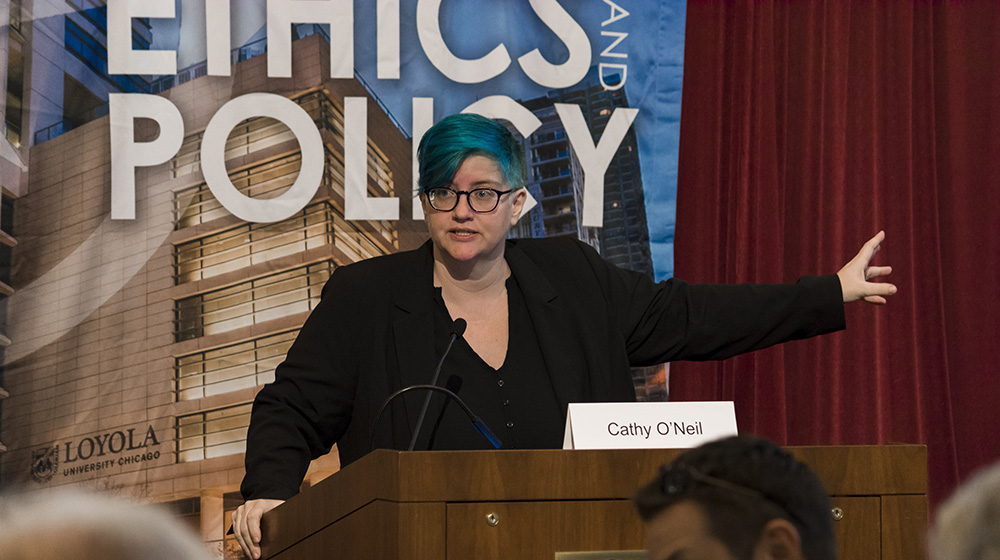 Author and mathematician Kathy O’Neil spoke about on algorithm's inaccurate and often destructive results in society, based on her book, “Weapons of Math Destruction: How Big Data Increases Inequality and Threatens Democracy.”

“...My talk is about the fact that algorithms can be useful, but... they can also really undermine our goals,” O’Neil said. “The problem is that because we trust them blindly, it’s hard for us to know if our goals are being met, or if they’re being undermined by the algorithms.”

The former hedge fund analyst said algorithms can start as good ideas with positive intentions, but can yield biased results, making the lives of certain people or groups more difficult.

In her session, O’Neil talked about an example of using a “secret” algorithm called the Value-Added Model to separate the “good” teachers from the “bad.” The algorithm holds the teacher responsible for his or her students’ standardized test scores.

The method proved inconsistent. For example, a person teaching the same course the same way every year, could still have students with varied standardized test scores each year; making it impossible to consistently and fairly determine a teacher’s performance. Still, teachers sometimes paid the price, and were fired from their jobs, according to O’Neil.

O’Neil wants algorithms, and the people who create them, to be held accountable for their actions.

“I would want [algorithms] to be audited and monitored to make sure that they are meaningful, legal and fair,” she said.

Fear and trust in mathematics is the reason people are getting away with abusing society at large, according to O’Neil. If people feel intimidated, they don’t ask questions.

“It’s actually really something we need to get over,” she said. “And I’m not saying we all need to love math — that probably won’t happen. But we all need to realize that there are questions we can ask even if we don’t understand math. This is not a math test, we have to stop seeing it as such — it’s a political fight.

She said groups, like teacher unions, have to fight back; not because of math, but because the data is “statistically meaningless.”

While her expertise lies in mathematics, O’Neil said that conversations about ethics and values are important, and society should be having these conversations separately from algorithms.

“All I’m saying is our intimidation of mathematics allows people who are in power to decide what success looks like, whereas that should actually be a conversation we’re all involved in,” she said. 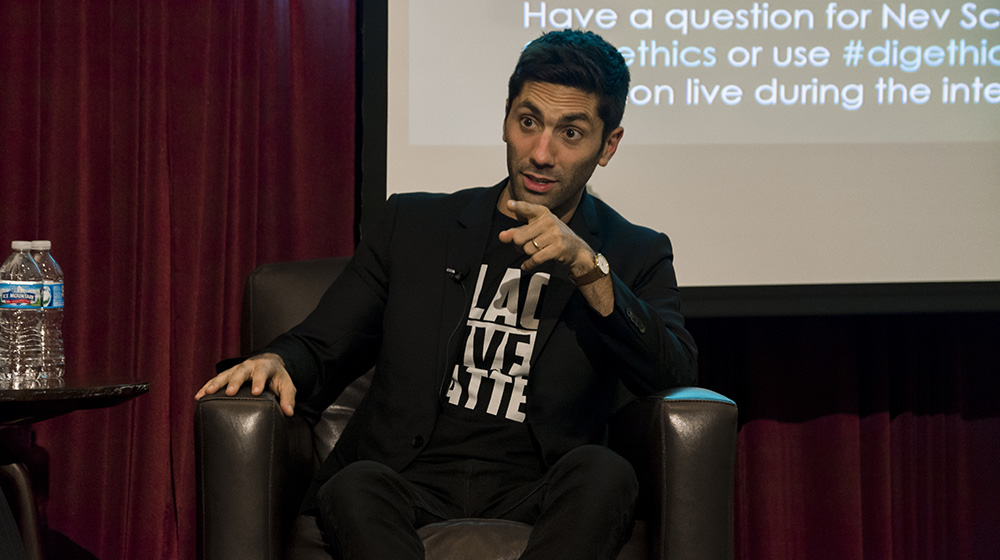 Executive producer and host of MTV’s “Catfish” Nev Schulman discussed ethics and dilemmas of relationships in the digital world during a Q&A session with SOC Dean Donald Heider. The event drew nearly 250 guests, according to SOC Event Coordinator Genevieve Buthod.

A catfish, according to Schulman, is a person who pretends to be someone they’re not online.

He attributed catfishing, or those getting “catfished,” to a combination of boredom, low self-esteem and the desire to be loved.

“[People who are ‘catfished’] think that this is the best thing that’s going to happen to them — that some attractive person is in love with them and be obsessed with them. And the real dream is that that person is going to take them out of their lives, out of their humdrum isolation and fix everything,” Schulman said.

For this reason, he said, the goal for himself on the show is to “just be nice to people because a lot of people don’t have anybody nice in their (lives). It’s just a sad reality.”

After seven seasons, “Catfish” continues to have a fan base because many viewers find the show relatable to their own lives, according to Schulman.

For this reason, people crave the “cathartic” and emotional excitement of having someone fall in love with them, Schulman said.

Schulman argues there are pros and cons to accessing the World Wide Web.

Schulman said he sometimes feels like the show exploits people, putting them in situations where they can suffer heart-break, but asserts that the show is doing a lot more good than bad.

“(I’m) reminded, sometimes by [co-host, Max Joseph]…that this experience for this one person will affect millions of people in a positive way,” he said. “People are going to see this kids struggle and they’re going to identify with it and ...hopefully something will change for them. And that feels like the justification we need to continue making it.

Despite his success with the show, Schulman said he still feels like he’s “significantly underperforming.”

“I have big dreams, he said. “I’d like to be thought of as someone who really moved the needle in terms of helping young people help themselves and improve their lives.”

For now, Shulman said that if he can help at least one person start a conversation about changing their lives, then he’s done his job.

“I think we make the most important reality TV show,” he said. “And I don’t say that to brag, but for young people, I think our show does the most good…”