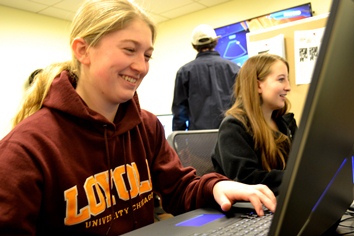 Today’s society lives on the iPhone in the back pocket of a ratty old pair of jeans. Man and machine is closer than ever.

To help students and faculty explore that ever-expanding intersection of society and technology, Loyola School of Communication opened the Social & Interactive Media Lab on Friday, February 21.

With hunched shoulders and waving arms, some attendees took turns trying to beat a jet ski game on the lab’s X-Box Kinect. Others hunkered down over PCs, trying to complete missions and drive cars.

After getting the go-ahead from SOC Dean Donald Heider, professors Florence Chee, Meghan Dougherty, Seung-Chul Yoo and Jamason Chen took the lab from concept to reality.

“We want to bring the humanity back into technology,” said Chee, who acted as emcee for the SIMLab open house.

Many of the lab resources’ focus on video games. Tucked away in a back corner of the SOC building, a large screen monitor stretches across the back wall of the lab, hooked up to an X-Box One below. Gaming and 3D PCs line one wall with dividers between to provide some privacy. A gaming laptop and laser printer were thrown in for good measure.

Video games are at the core of interactive media. They’re the cutting edge of new media, combining hands-on elements with cinematography and dynamic storytelling, Yoo explained.

Even though computers line its walls, a table lies in the heart of the lab, reaching from one end to the other. As Chee stressed, the lab is about both research and discussion.

“It’s not about learning to push a button,” Chee said. “It’s a space we hope to have a lot of conversations about society and technology in.” 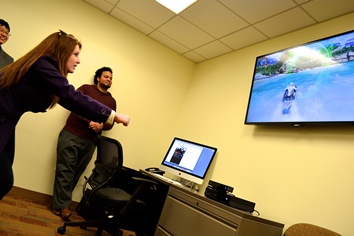 To kick off those conversations, University of Michigan Assistant Professor Andre Brock was invited as a guest speaker. One of Brock’s areas of research includes racial identity online.

“This space can help develop some of the technological tact we need to have,” Brock said of the SIMLab. “People don’t think about what they’re doing when they post online.”

There are a number of digital media teachers in the SOC who want to collaborate through interactive media and dynamic storytelling, but students may not rush in right away. The lab is still new, and it may take time to find for students interested in games to wonder in.

“I’ve never thought about games before,” junior journalism major Lydia DeCoud said. “I’ll be interested to see what the lab turns out.”

For now, Yoo said they will focus on drawing faculty and professionals to the space. Graduate students studying digital storytelling will be able to use the lab for discussions and research and may be hired as teaching assistants later. There’s still limited access at this point, however.

“I think this is just a great beginning,” said Yoo.