Tina Sfondeles is a newspaper reporter. But she loves her job so much, it doesn’t feel like work.

Sfondeles, a Loyola graduate, is a Chicago Sun-Times political reporter. She knew she wanted to be a print news reporter since she was in sixth grade.

Sfondeles did not start in the political beat, but she said her personality is perfect for this beat and the skills it requires.

“I’m very good at source building … [the politics beat] it’s perfect for me in terms of the way it works,” Sfondeles said. “I talk really fast and I work very fast and I’m friendly and funny. I’ve been told I’m very relatable, so when I talk to politicians I am able to speak with them like they’re regular people.”

Sfondeles graduated Loyola in 2005 with bachelor’s degrees in communication and international studies with a minor in journalism. The journalism major was just beginning as Sfondeles was about to graduate. While at Loyola, she said Dr. Connie Fletcher had a large impact on her and is still a good mentor and friend.

“I got such a kick out of Tina as a student,” Fletcher said in an email. “She just brimmed with energy and enthusiasm; I can't remember a day, even around midterms (slump time) that Tina seemed the slightest bit tired.”

The political beat has demanding hours and Sfondeles said she enjoys waking up and not knowing exactly what her assignment for the day will be. For example, Sfondeles recently was sent down to Springfield early in the morning to cover an Illinois House vote of gun legislation.

“The unpredictability [is the most stressful aspect of the job],” Sfondeles said. “I wake up at 7 [a.m.] usually … the days are long and you’re not sure how they’ll go.”

Sfondeles’ personality and love for the job makes writing about politics exciting and rewarding. Sfondeles said that with the primaries approaching March 20, she needs to find ways to relax because “it’s insane, it’s all day.”

“The way firefighters and cops have adrenaline highs, that’s what I have all the time … it’s a constant state of ups-and-downs and you have to just become accustomed to that,” she said. “You have to take a break for yourself and breathe. I have to exercise because it helps my brain and everything else calm down.” 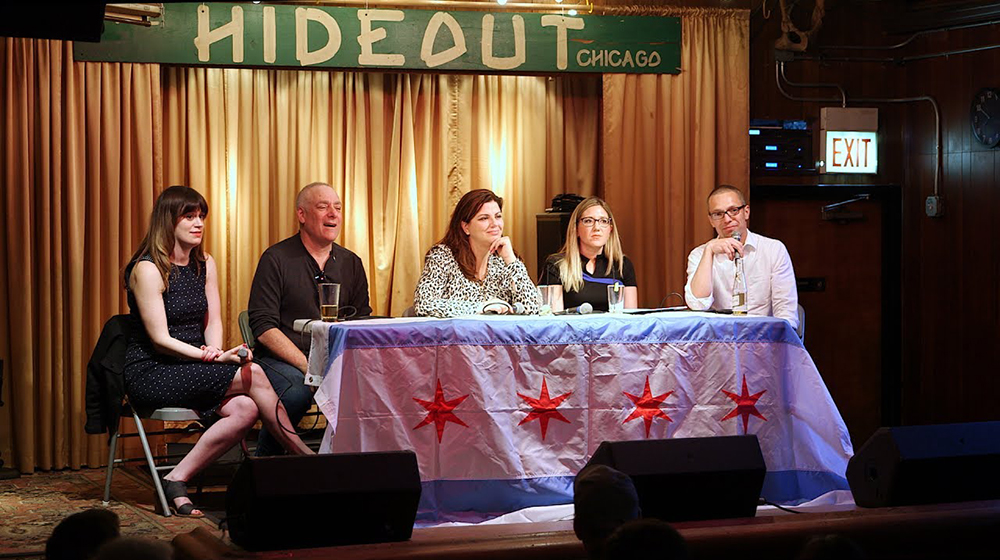 Sfondeles said one of the most challenging parts about covering politics is remaining unbiased and covering every side.

“Especially in the election coverage you’re always trying to be fair,” Sfondeles said. “Making sure you have equal coverage for everybody … you need to try to give them a voice. I don’t think that’s a problem for me, but I’m extra careful.”

Sfondeles joined the Sun-Times in 2007 writing high school prep stories, then moved to the wire desk covering breaking news and was later promoted to the metro staff writing on transportation. She moved into general assignment and was finally promoted to the political beat. She has been on the politics beat for over two years.

“These sessions, when Tina shows how you report, write, and share through social media before, during, and after a story are especially valuable to my students,” Fletcher said. “I like her wardrobe tips, too: Tina will pair a nice jacket and top with jeans and boots. The top is in case she's on TV; the bottom half of the outfit is in case she needs to slog through mud or cracked pavement, whatever Chicago might throw at her.”

Sfondeles has visited Fletcher’s class several times since her graduation and has taught courses for Loyola. She has taught Reporting Basics I, and when she taught Advanced Reporting, she guided her students in the production of Mosaic, Loyola’s social justice magazine. She said teaching the journalism classes are her favorite but teaching overall has helped her appreciate journalism more.

“I think it’s a good thing when journalists are teaching aspiring journalists,” Sfondeles said. “It made me appreciate my job a lot more seeing people want to do what you’re doing and being able to help them do that.”

Sfondeles said she used to be worried by people’s responses to her clips, but as she progressed in this beat she learned to trust herself and her staff.

“If you’re fair, if you’re factual, if you show all sides – you’ll always win,” she said. “I definitely have had some discussions with people who were upset … but they couldn’t point out anything that was factually wrong. You have the support of your editors who will fight for you.”