Logging onto Facebook and playing video games are casual activities for most users, but they may have more social significance than just killing time after class.

For Loyola Assistant Professor Florence Chee, digital technology like social media and video games are more than just recreation; they’re an insight into our society, from economics and politics to race and gender.

Chee, who began teaching in the School of Communication last fall, has recently been studying social issues and communication technology, such as social media use during the Arab Spring and how race and gender plays a part in technology use.

“It’s not enough to study the tools, you have to study the social issues behind it,” said Chee. “In communication and in everyday life, we’re bombarded with the flashy things. We don’t always dig deep and think about why and how we use these technologies.”

One of Chee’s most pervasive interests is video gaming. As a gamer since she was 4 years old, video games became a research topic over 10 years ago during her honors thesis in college. She began interviewing gamers who played EverQuest, a popular online game that had gained the reputation of being addictive.

“I wanted to drill deeper into that concept on why we think of technology as addictive when there could be so many things going on,” said Chee.

While doing her Master’s and Doctoral work, Chee revisited the idea of the addictiveness of video games. Korean gamers had started to gain a media reputation of being especially susceptible to becoming addicted to games.

“I found that problematic too, because an entire population was being oversimplified,” said Chee. 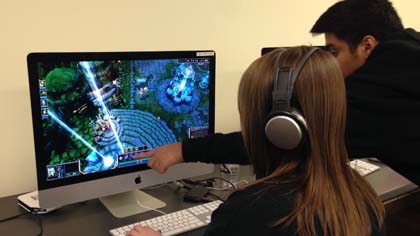 Her work in Korean gaming continued between 2004 and 2010, where she stayed with a Korean family, visited Korean Internet cafes and expanded her research comparing gaming culture in other countries.

She looked at how games like StarCraft, an American game that didn’t receive much attention at home, became very popular in Korea, where tournaments of the game were broadcast on live television. Gamers often received a celebrity status in Korea, where gaming was seen as a way to socialize with others and make friends.

“A lot of my research has dealt with how people in different environments use the same technology in a different way,” said Chee. “Here we have the common perception that gamers are geeky and anti-social, but my research has shown that is not the case.”

This semester, Chee is teaching Communication and New Media as well as Game Studies, where students are exposed to the issues in gaming, game production and ethical questions about video games. 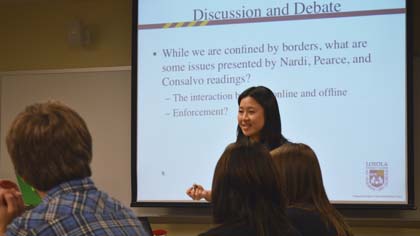 “When you’re just playing a game, you don’t even think about the back end of things,” said Chee, “like gender dynamics that happen on- and off-line or how in cyberspace how race can even be an issue.”

Students are exposed to discussion, debate and are able to see several guest speakers who study gaming that frequently stop in Chicago. They also get the opportunity to study a game and present it to the class. After the presentation, all of the students get to try and play the game. According to Chee, Game Studies is a course that is not frequently taught at an undergraduate level.

Jeremy Wellhausen, a junior International Film and Media Studies and Communication major, took the class because he plays video games fairly often and says the course has become one of the most interesting that he’s taken.

“She really understands gaming, it’s really easy to talk to her,” said Wellhausen.

Rebecca Strang, a senior Digital Media major, really enjoyed the format of the class that includes a lot of time for discussion and that Chee chooses good material for the course.

“I think that she does a good job balancing and picking relevant articles,” said Strang. “We discuss gender, race, anything you would talk about in any other class.”

Chee thinks that courses like Game Studies can easily be written off because they focus on a recreational activity, but she argues that video games tell a lot about how people interact within our society.

“Games are really much more than just a hobby or a pastime, they’re embedded with social norms and values,” said Chee.