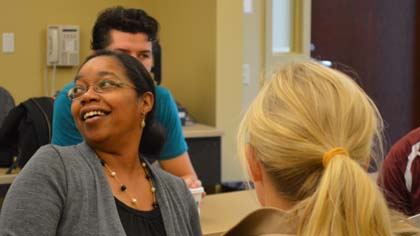 School of Communication instructor, Richelle Rogers, expects a lot of her students.

“I’m not the kind of professor that likes to stand and talk to students and they listen and take notes and walk out of the classroom and that’s the end of my interaction with them,” said Rogers, “I like an active classroom.”

Rogers, who teaches Introduction to Communication, Communication and New Media and the graduate course Narrative Communication Techniques, knows the benefits of high expectations first-hand. She has worked as an award-winning journalist and producer for years, winning several awards for her work, including the prestigious David Bloom Award for Excellence in Enterprise Reporting.

One of the earlier jobs in her career was a producer in the ABC News documentary unit before working as a producer on Nightline with Ted Koppel.

“The networks are a really interesting place because it teaches you how to be good under very difficult circumstances. It’s very much sink or swim,” said Rogers, “It really just trained me to aim high.”

She worked on pieces like Hopkins 24/7, a documentary that allowed their crew access to Johns Hopkins Hospital in Baltimore before many unscripted medical shows were on air, her award-winning piece on the Brooke Army Medical Center burn unit, and Wives of the Wounded, a piece on wives of wounded soldiers after they had returned from the Iraq War.

“The most important thing is that whatever she was doing, she cared passionately about what she was doing,” said Tom Bettag, the former executive producer of Nightline while Rogers worked there, “She is incredibly compassionate and she is the sort of person who can go and talk to anyone and understand where they’re coming from.”

Rogers acknowledges that her early mentors pushed her to succeed and she hopes to do the same with her students. In her Communication and New Media class, students are put in groups at the beginning of the semester and work on a blog where they produce all of the content.

They produce around three to five blog posts a week and are not allowed to use photos or video from any other sources. Most students already know how to consume content on Twitter, Facebook and other media sources, said Rogers. One of the skills she hopes that they can take to their future careers is how to create their own content.

Marina Peric and Fyonna Salazar, both junior Advertising and Public Relations students, are in Rogers’ Communication and New Media course. Their project is called Urban Color (blogs.luc.edu/urbancolor), a blog that uses color theory to explore culture, people and places in Chicago.

“She allows a lot of freedom among her students,” said Salazar. “She kind of guides you with the connections she has, the experience she has, and the talent that she has. It’s all personal development.”

Tom Dyke, a sophomore Advertising and Public Relations major, works in a group on a blog called North to Howard (blogs.luc.edu/northtohoward) which focuses on events and stories based on what happens off the Red Line.

“Afterwards I’d be a lot more satisfied with the project with the tips and feedback that she’s giving. She pushes students a lot harder than I would have expected in this class,” said Dyke.

The working world is competitive and constantly changing because of new technology, said Rogers. She tries to adapt her classes to skills they’ll need in the careers by making sure they can write, shoot, edit and think critically. She acknowledges that writing is an especially important skill or any line of work.

“I've seen many journalists who look the part but couldn't write and after six months I never saw them again,” said Rogers.

For the students in Rogers’ Communication and New Media class, the result is a website they can use on their resumes. Some students want to continue to update their blog after the semester ends, and Peric has used it as part of her personal portfolio.