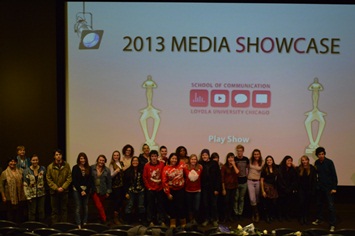 Students can spend weeks or months on a final project that they usually never see on the big screen. The School of Communication Media Showcase on December 5th at the new Damen Cinema allowed students to see those long hours of work displayed for other students and faculty, and they may have even won a prize.

Students’ work is nominated for entry by professors into the Media Showcase in categories like commercials, screenplays, news features, sports reports, documentaries, photography, websites, narrative films, mixed media and alumni work. Audience members could vote on their smart phones or computers to choose winners for each category.

Since professors vetted the work, students at all levels from freshmen to seniors got the chance to see their work showcased and won prizes.

“I think it’s very valuable and important for people to have their worked screened publicly and to experience watching their work with other people,” said Aaron Greer, associate professor and showcase coordinator. “When you’re making stuff in class, you’re thinking this is just a homework assignment. You should be thinking when you’re making work: this is for public consumption, I want other people to see it.”

While the School of Communication has always hosted a showcase in the spring, this year’s December showcase is the first fall showcase geared towards visual content.

“This is the first time we’ve done it in December and part of the reason that we moved it is because so much of the work that happens now in the School of Communication is video, audio, web stuff that you really need to sit down and look at,” said Greer.

In the past, spring media showcases have made it easier to showcase written work or photography, while video projects may have needed to be projected in the background without sound, said Greer. This new format gives students the chance to watch projects as they were intended to be seen without the added stress of spring graduation and finals around the corner.

This December’s showcase also started using an online voting method this year to choose a winner for each category.

“Most people have good humor about it and I think it’s important for people to have that sort of feedback,” said Greer, “It’s positive to get positive feedback, and sometimes it can be positive to get feedback that this work isn’t as good as that work and that’s okay.”

Amanda Kopec, a senior Film Production major, won for her feature-length screenplay Future of a Lost Cause. Her 80-page screenplay detailed the story of a troubled teen and a middle-aged woman who had to escape from drug dealers after blowing up their warehouse.

“I was super surprised, I was not expecting it at all,” said Kopec.

Jessica Hannapel, a junior film production major, was entered for her audio documentary where she interviewed her mom about the history of her local church, founded by a Native American chief. Hannapel is a transfer student and this is her first year at Loyola.

“I feel amazing I was nominated,” said Hannapel, “It’s my first year here, and that I was nominated by a professor I don’t know that well means a lot.”