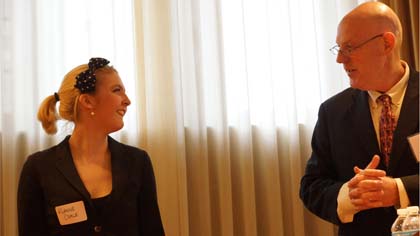 Dozens of students were honored Friday for their academic accomplishments at Loyola University Chicago’s School of Communication Honors Reception and Student Showcase.

The honors reception is part of The Weekend of Excellence, in which there are numerous events that celebrate Loyola students and showcase excellence in a variety of learning settings. 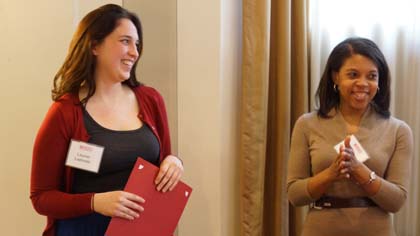 An Outstanding Major Award was given in each of the four majors of the School of Communication:

‌Anna Helig, winner of the Outstanding Senior Journalism Major Award was honored to receive the award. “I’m very humbled to have won, because I know so many of my peers are amazing at what they do. So to have been chosen is such an honor,” said Helig, 22, a senior journalism major.

Communication scholarship winners were also recognized at the reception, such as Rianne Coale recipient of the Jim Gibbons Broadcast Scholarship and the Walkowicz Scholarship.

John Slania, director of the journalism program and on the selection committee for the Outstanding Major Awards added that he was quite pleased with the large crowd of attendees. 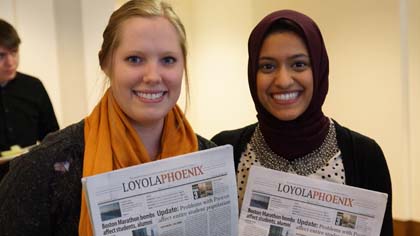 The winners included Bridgid Danahy, Michelle Cammenga, Julia Watts and Hector Gonzalez, all who worked on a project with Art Therapy Connection.

‌The Ebeling PR-ize award recipients were awarded a $2,000 scholarship split between the four students, as well as written recommendations by Chuck Ebeling. Bridgid, Michelle, and Julia accepted the award from Mr. Ebeling

This reception celebrated the hard work and dedication of talented Loyola students within the advertising and public relations major who were enrolled in the Public Service Communication course throughout the spring semester.

One of the event directors described the importance of the reception. “This is a great event to celebrate all of our students who put a lot of time and effort in perfecting their projects, as well as honoring the best group collaboration which will be determined by a panel of judges,” said Alexis Zanfis, 22, a senior advertising and public relations major.

Associate Professor, Kay Felkins, Ph.D. introduced the event. “All of the students here today should be proud of all the work they have done as they each have completed over 2,500 hours of community service by working on their campaign projects,” Felkins said.

A student described her experience working on her project over the course of the semester.

“My group did a project on Chicago Shares, which is a non-profit organization. It was a long and sometimes stressful process to complete, but it was also a very rewarding experience and I’m definitely proud of our finished product,” said Natalie Foster, 21, a junior advertising and public relations major.

Chuck Ebeling announced the winners and congratulated each of the students.

“People are watching and learning from everything you students do. All of you did great work, giving us hope for the future in all you have to offer. We appreciate your efforts and applaud your hard work,” Ebeling said.