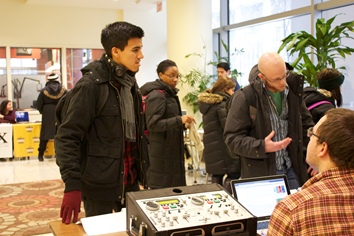 ‌Facing a competitive job market after graduation, Loyola students are searching for ways to make their resumes stand out. The Spring Student Organization Fair on January 22nd provided undergrads with a chance to sign up for the experiences they will need to land a job.

The fair offered an opportunity for students who recently transferred, returned from studying abroad, switched majors or otherwise missed it in the fall to join communication-focused clubs like WLUW and Loyola Phoenix.

“I’m hoping to get more connected,” said Londen Shannon, a sophomore journalism and theater double major. “I think that applying my classwork to the actual field will speak volumes in the future.” 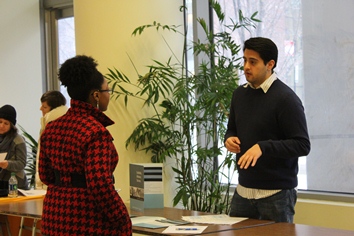 Membership Director for Loyola’s chapter of IABC and senior advertising and public relations major Katherine Luna said her organization focuses on getting people outside of the classroom to make personal as well as professional relationships through the society’s mentorship program.

PRSSA does similar work, partnering with other organizations such as the Young Professionals Network to host networking events.

“We’re preparing students to get out into the real world,” said PRSSA Secretary Rebecca Browne, a junior advertising and public relations and theater double major.

Across the board, the Loyola organizations emphasized the importance of experience. Student-run media groups teach students the technical and creative skills needed to work in a newsroom environment. Senior Nick Amatangelo said he switched his major to journalism after joining Rambler Sports Locker and learning the ropes.

“Everyone does everything,” said Amatangelo of the university’s only TV show. “It’s great broadcasting experience.”

The weekly student newspaper, Loyola Phoenix, offers both aspiring reporters and hobbyists a chance to publish their work. All the work students do, said senior journalism major and Phoenix Editor Brigitte Sheerin, can be used to build up a portfolio which could help later when students enter the job market after graduation.

“You get great clips,” she said. “You get your name out there.”

The professional societies approach valuable experience in a different way. Both SPJ and PRSSA run workshops on resume writing and host guest speakers.

“It’s a lot of practical stuff and the tools you need,” Alexa Asmus, sophomore journalism major and SPJ social media chair, said. “Everybody’s really into it. We can geek out”

Not all student organizations are focused on resume building, however. As part of Loyola’s student activity mission, the clubs also serve to strengthen the bonds between the students themselves.

Freshman journalism major Sarah Tuckowski said she was at the fair to see how she could get more involved.

“I think it helps to make the college experience easier,” Tuckowski said after she signed up to join SPJ.

“There’s a lot of times I catch myself doing nothing,” said Depompei, who was interested in joining IABC. “I thought I might as well not spend time refreshing my twitter newsfeed.”