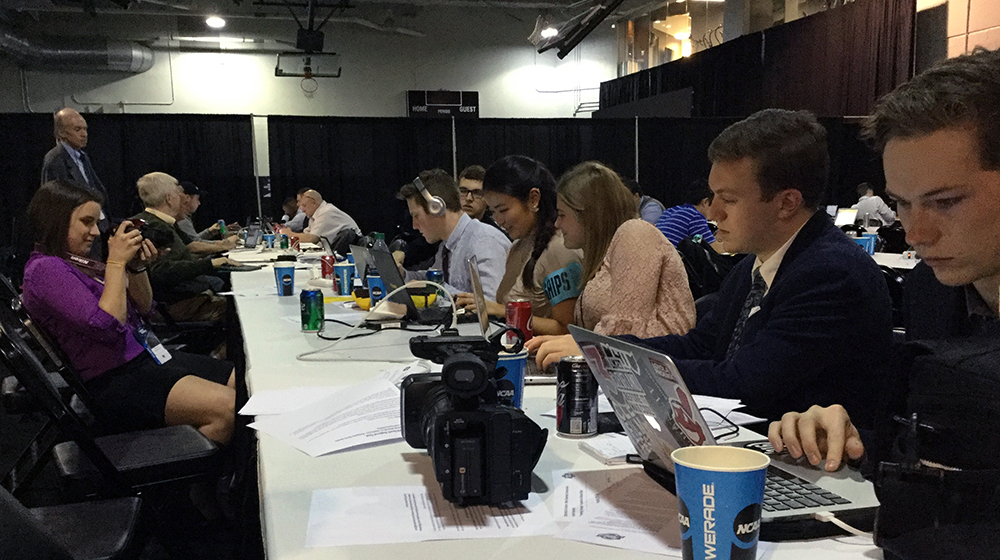 Among all of the excitement and flurry of news coverage surrounding the Loyola University men’s basketball historic run in this year’s NCAA tournament was the presence of student media.

The Loyola Phoenix and Rambler Sports Locker (RSL) covered every game during this breakout season, before the team showed up on the radar of local and national media. For the last four years the School of Communication (SoC) has provided travel to the Missouri Valley Conference in St. Louis for a number of students  in an effort to enhance their education around what it means to act as professional reporters.

WATCH: On the road at Arch Madness

This season the SoC not only sent students to Arch Madness, but to all three locations of the NCAA tournament: Dallas, Atlanta and San Antonio. From print, to video, to photography, Loyola’s student media covered all facets of the games.

Henry Redman, Phoenix sports editor and co-producer of RSL, was on the road for all four stops along the Ramblers’ journey to the Final Four. He could feel the anticipation of waiting to find out if the SoC would be able to take students to the first round of games.

“I was so excited when we found out we would get to go to Dallas,” the multimedia journalism major said. “We were worried we wouldn’t have funding and were planning on paying our own way down. I was shaking in the SoC basement when we got the email that we would get to go.”

Having the funds to travel through the Southern region was not the only concern students had. They also had to worry about working with seasoned professionals. For most of the students this was a once in a lifetime opportunity that came with a lot of pressure.

Senior Hanako Maki came along as a photographer during the games in Atlanta and San Antonio. She said she worried about not being able to be as good as the pros.

“I was — and still am — most nervous about holding my own with the working professionals,” said Maki, a multimedia journalism and studio art photography major. “I felt like we were underdogs because we're student media and was nervous about failing to earn the respect of my peers.”

PHOTOS: Ramblers lose the battle Four it all

Working with professionals is a skill that the SoC tries to prepare students for, and covering the tournament offered an opportunity for these future journalists to put their classroom lessons to work.

“In Richelle Rogers’ class we would have one class period to report, write and complete a broadcast story,” Redman said. “It helped my speed so much that I never felt like I was too slow or panicked when there was pressure.

Maki said she first viewed the Elite 8 weekend as a challenge, but was able to come out triumphant

“I am proud I was able to leave my [shyness] on the shelf and make sure I wasn't pushed out of the way and that I got the shots I needed,” she said.

Loyola’s student media did such a great job covering the Ramblers that they even got the notice of some major news outlets. Assistant Phoenix sports editor and RSL reporter Nick Schulz did a preview of the Final Four on Chicago’s WGN, and The Kansas City Star did a feature on the student reporting team.

In total the SoC sent eight students to the combined four cities over the last month. The amount of coverage they did, and received, illustrated their preparedness.

“You can run with the big boys,” Redman said. “Just because they have more expensive equipment and get paid to be there doesn’t mean you don’t know what you’re doing.”

Jessica Brown is a Senior Professional in Residence in the Multimedia Journalism program at the School of Communication, co-advisor to the Rambler Sports Locker, and a Public Voices fellow.