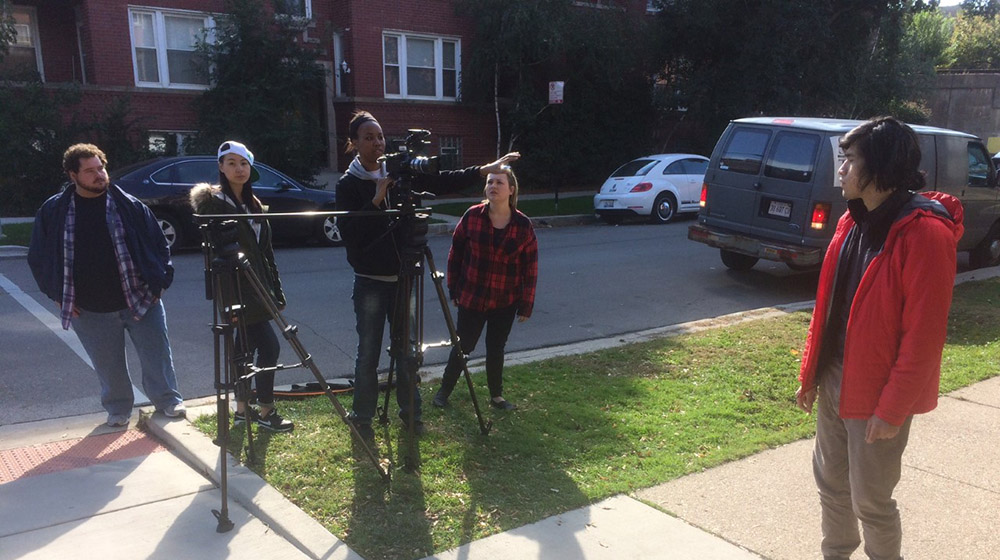 Loyola alum Jacob Voss won an Award of Excellence in the Short Form Video Documentary category for “Second Flight” – his first professional quality documentary – which he filmed during a two-week Digital Storytelling course in Santiago, Chile.

“I wasn’t expecting to get an award at all, and so when I did, I was super happy about it, and it really motivated me,” said Voss, who graduated in December with a bachelor’s degree in Advertising and Public Relations. “I want to keep doing it. I want to start making more films.”

Voss’s documentary details how the burrowing parakeet narrowly escaped extinction, its population in the Río Los Cipreses National Reserve growing from about 200 to around three thousand in just a couple decades with the help of the National Forestry Corporation, or CONAF.

Much closer to Loyola, senior advertising and marketing student Nikhil Sequeira and graduate students Ashley King, Caitlin Higgins and Hanlin Guo together produced “How I Disappear,” a PSA addressing Chicago’s rampant gun violence. The spot won an Award of Excellence in the category Commercial Spots/PSAs under 90-seconds.

It shows a group of seven students who vanish one by one as they walk down a Chicago street – a visual representation of the CDC’s statistic that on average, almost seven young people are killed each day by guns in the United States.

The students created the video for their Multi-Media Production class in partnership with the Illinois Council Against Handgun Violence.

“We actually got to meet the woman that runs the organization and … the more she talked about it, the more we thought about things,” King said. “I thought it would be crazy not to make something amazing for them that they could show other students and they could share, too.”

The organization posted the PSA on its YouTube channel, but King said she and her group members were surprised that their other project – a humorous commercial for the energy drink KRā – didn’t get recognition from BEA. That video has garnered 47,000 views on the KRā Drinks for Athletes Facebook page.

The judges did have a taste for another beverage: professor Goheen’s “Fog Beer,” a video that was awarded Best of Competition in the Faculty Television News Feature Reporting category.

The feature shows how two brothers capture fog water to brew beer in Chile’s Atacama Desert – known as the driest place on earth.

“I wanted to do a story about fog water for years and years,” Goheen said. “In researching it, I found where these two brothers made beer from fog water, so it was sort of a two-for: the technology of capturing water from the nets from fog but turning it into this unique way to make a living.”

Just getting to the brothers’ microbrewery was difficult – their little village wasn’t on a map, and Goheen doesn’t speak Spanish, so asking for directions didn’t help much. When he finally reached the location where he’d spend two days filming, he sprang into action.

“The only day I saw fog was the first day I arrived,” he said. “I was smart enough to realize … I may not get another chance to get the fog or I’d have to stay days and days and days beyond what I wanted to. So, I shot the heck out of the fog.”

Although Goheen said predicting what exactly will make an entry stand out to the judges is about as difficult as predicting the weather, he and the winning students clearly did something right.

This year’s top winners will be awarded prizes during the BEA’s convention and Festival of Media Arts April 22-26 in Las Vegas, according to the BEA website.