SOC working with journalists from the country of Georgia

Although the fall semester has yet to begin, several Loyola instructors are already back in the classroom. With the help of a grant from the U.S. State Department, the School of Communication is working with journalists from the country of Georgia.

“We’ve been working with a group of journalists from seven different stations that broadcast across Tbilisi and across Georgia,” said School of Communication Dean Don Heider.

According to Heider, a group of about 10 journalists came to the U.S. in March, splitting their time between Chicago and Washington D.C. And in August, another group traveled to the U.S., again spending time in the Midwest and the capital.

Journalists from WBEZ’s “Curious City” are participating in the instruction, as well as Loyola alumni now with the Chicago Tribune and WLS Channel 7.

Georgia, an emerging democracy, has a very robust terrain for journalism, Heider said. While in Chicago, the journalists will attend seminars based on the general question, “What is journalism?” with topics such as live interview skills and engaging with an audience on social media. In D.C., the group will meet journalists with CNN and public affairs television programs.

“We like and love everything about the university and the city, and your location is perfect,” Gabunia said. “I’m glad we’re here in the center of Chicago at a great university. We’re really glad to be here.”

“My education has nothing to do with journalism,” he said. “But that’s a normal thing in Georgia.”

Unlike in the U.S., the two journalists said most of their peers in the industry are under 40 years old, and women have been at the forefront of broadcasting. But among the many comparisons Gabunia has made between the two countries, he said he’s happy to see similarities as well.

Gabunia and Shavgulidze are among the approximately two-dozen journalists who are participating in this partnership.

“The four of us involved in the project—John Goheen, Lee Hood, Richelle Rogers and myself—traveled to Tbilisi this summer,” Heider said. “And we spent a week there visiting every one of these seven TV stations, learning about the country. We sat in on some of their live broadcasts, and it was utterly fascinating.” 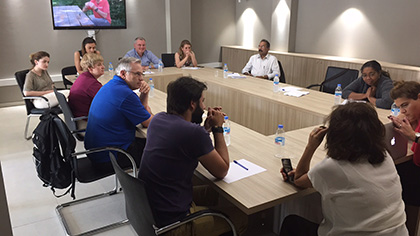 The time in Tbilisi was also an opportunity for the Loyola faculty to give feedback on the Georgians’ progress since their March visit, offering the journalists constructive feedback about their shows, to help them further improve.

“When you work in the business, often times you don’t get help,” he said. “You’re there at your station, and you’re trying to improve, but very rarely does anybody come in from the outside to give you constructive criticism. I think that’s something that anybody can benefit from.”

For Heider, Georgian media reminded him of American media from an earlier era. Because it’s a developing democracy, the population is particularly interested in political news and coverage.

“They have a whole country full of people who didn’t get to vote, and there was no open political dialogue in media,” he said. “It was only what they heard from the state. Now there is this robust appetite for politics and political speech. It did take us a while to get our mind around the fact that there are seven stations, all doing political talk shows in prime time.”

For Heider, that’s not something that would happen today in the U.S. But he said it’s also exciting to see how many people are keenly interested in the future of their country.

“The media [in Georgia] has been suppressed—murdered or imprisoned,” said Goheen.

But now, Goheen said, the people are hungry for democracy and want to learn as much as they can. For him, it’s exciting to participate on the journey to becoming a successful democratic society.

“When you have an emerging country that’s embracing democracy, and you get to help influence aspects of that growth, for a lot of journalists, that’s a really fulfilling thing to know,” Goheen said. “You’re helping to share a principle that many of us have learned about in school—that many of us are teaching at Loyola.”

The grant runs out at the end of the summer, but Heider said he suspects Loyola will continue to have a relationship with these journalists. The faculty cares about them and wants them to succeed in Georgia. And Heider will look for feedback, in the event that Loyola tries this type of exchange again.

“Roughly 20 percent of Georgia is occupied by Russia,” he said. “One occurrence, several years ago, displaced several hundred thousand Georgians from their ancestral lands. So I did a film on what they call the ABL, the Administrative Boundary Line, and how it’s affecting people seven years later.”

In this instance, it was a Georgian journalist with Tabula TV who helped Goheen make the necessary professional connections to complete his work.