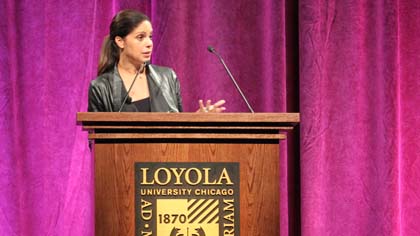 Sept. 2013--As Loyola’s senior journalism majors start their final year at school, some may be thinking about jobs they may be starting in a year.

Award-winning journalist Soledad O’Brien, who has worked for CNN, Al Jazeera America and her own company Starfish Media Group, started her career in broadcast journalism in 1989 at WBZ-TV removing staples from the walls of the station.

“To say that my parents were disappointed in my career in TV news (at that time, staple-removing) did not come close,” said O’Brien.

O’Brien spoke at Loyola on Sept. 18 as part of the Maroon and Gold Society Lecture Series discussing her career as a journalist from her early days removing staples from the station walls to her current documentary works like Black in America, Latino in America and Gay in America.

The lecture, sponsored by The Maroon and Gold Society, Student Development, the School of Communication, the College of Arts and Sciences and the School of Education, asked what professional experiences left speakers most troubled and where students have the most opportunities to do good.

As a child of an interracial marriage, O’Brien discussed how her parents couldn’t even get married in Maryland where they lived, weren’t allowed in some restaurants together and were spat on in public.

When O’Brien began to work as a journalist, she encountered jobs that wouldn’t hire because there was only one job for a black journalist and she wouldn’t read “black enough” on television.

“I can’t fit into this box for what people want and expect,” said O’Brien recalled telling her mother after the job interview. 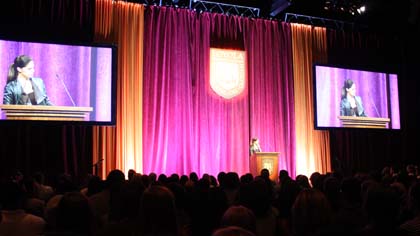 O’Brien discussed how racism and sexism has permeated her career and where she sees room to improve media coverage in America. Minority groups often receive the least coverage and are easily boxed into stereotypes by the coverage they do receive.

“There are hundreds of stories about white people in the news, five about black people, all about crime and entertainment, and three about Latinos, all about immigration,” said O’Brien, “There should be a hundred about everyone.”

She hopes that covering minority groups would dispel stereotypes about the groups, avoiding the concerns that stories would make them look bad, a concern that majority groups usually don’t have.

“I think that ultimately has to be the goal of journalism,” said O’Brien.

While covering the 2010 earthquake in Haiti, O’Brien remembered seeing a box truck filled with 25 sick, dehydrated babies, being fed milk and rice as there wasn’t any other food or clean water. She recalls it as one of the most horrific things she has ever seen.

She urged students to work for justice, even if it seems too large of a task. O’Brien saw the number of refugees in Haiti drop from 40,000 to 10,000 in just a few days.

“I saw stories of hope in hopeless situations,” said O’Brien.

Naushin Vahora, a senior and member of the Maroon and Gold Society, thought the lecture resonated with what the organization was meant to stand for; leadership, service and social justice.

She also found the lecture inspiring as a graduating senior.

“I’m a little sentimental about my time ending at Loyola, so the lecture really motivated me to make the most of my life,” said Vahora.