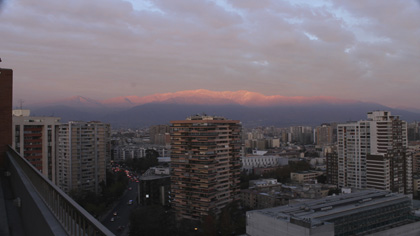 When ten Loyola students left for Chile this May, they embarked on a unique mission to tell stories of the people and culture in metropolitan Santiago, but there was a catch.

Loyola’s ultra-concentrated course meant that these students had only two weeks to film their footage.

These students were able to see the fruition of their work on Monday, September 15, when the Damen Student Center Cinema screened their final project: a collective documentary called “Storytelling in Santiago.”

The documentary, which runs approximately 77 minutes, features work from all 10 student directors and covers a broad range of topics, from the dreams of street performers to Santiago’s heartbreaking stray dog problem.

Each Loyola documentarian worked together with students from Universidad Alberto Hurtado in Chile. The Chilean students worked as producers on the films and also as bilingual resources for the filmmakers.

Five “Storytelling in Santiago” directors spoke with School of Communication Journalism intern Lauren Di Vito before the screening to share their experiences and offer insight into how they filmed their projects.

Lauren Di Vito: How did you get the idea to make your film about graffiti?

Steven Abriani: Everywhere I turned, there was graffiti. There was graffiti on telephones, churches—there was no limit, except maybe the subway system, which is their pride and joy. Everywhere I looked, there was a story, so I could point my camera at anything and have something to shoot. It was particularly interesting when you got to know the graffiti artists. I don’t speak Spanish, but I still sort of understood why they wrote what they wrote on the walls.

LD: What kinds of things were they writing?

SA: A lot of it was sort of anti-establishment. There was a big socialist movement in the ‘70s and the socialist leader ended up having the capital building bombed by outside forces. The military came in and seized power, and they had a dictatorship. It had an enormous impact on these people. Even as this died off and the people got to run their country the way they wanted to, there’s still a lot of control over these people. A lot of them want to go back to that socialist government. Chile also has a very high class inequality rate—I think it’s 16th in the world in terms of wealth disparity between the rich and the poor. There are a lot of people who are angry about that and voicing their opinion.

LD: What had attracted you to the program?

SA: I had been taking Professor Goheen’s classes since I was a freshman. I was always interested in doing documentary work. I’d never been to South America. I was reluctant to go at first, but then my friend Joey Filer [another student documentarian] convinced me to go, and ultimately, it was an opportunity I couldn’t pass up. I just wanted to film. I was so sick of going to work and filing papers. It was cool, because it was just two weeks based on film. You woke up and you shot film. If you wanted to go out and party a little bit, then that was your prerogative. I’d never had anything else like this program. 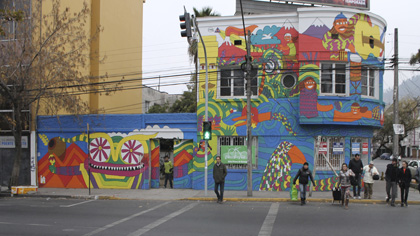 LD: What kind of street performance did you see?

Tim Nagle: There were a lot of musicians, and then non-musical performers like jugglers and actors.

LD: Was it like how it is in Chicago, where people busk for money, or are they just doing it for fun?

TN: A lot of people do collect money, but most of the people who we talked to did it more for the pure performance aspect. Money was secondary.

LD: What was the general age of people you profiled?

TN: It varied. There were some who were really old and really young, but a lot of them were between 18 and 24—college-aged.

LD: What was the most interesting thing that you learned about the performers?

Joe Bosch: I would say that it’s more of a way of life for them [than for street performers in America.] There’s a lot more at stake, and they know that. The performance culture in general there is taken way more seriously from the performers’ perspective, and from the audience perspective. Performance is way more apparent in everyday life. Wherever you go, you see it, so it’s unavoidable. There are a lot more public showcases of performance there, so it just becomes more of a part of popular culture than an underground scene. 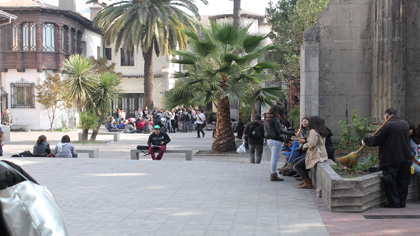 LD: Who did you talk to about this? Obviously you can’t interview the dogs.

Demetra Koris: We interviewed this organization called Fundación Stuka. They have actually started up an animal shelter. They go out to some of the poorer neighborhoods, vaccinate the dogs and provide free food for anyone who has a dog.

LD: I know some of the poorer neighborhoods might have dead dogs in the streets. Can you tell me more about that?

DK: There weren’t a lot of dead dogs.

Marissa Cameron: We had four people who were specifically covering this topic and not one of us saw one, but Steven (Abriani) did, so it was sort of by chance that he saw one.

DK: There are a lot of stray dogs just hanging out on the corners. They’ll just be lying there looking kind of sad. We have footage of one dead dog, and that’s it.

MC: Yes, and we’re glad we have that footage, because we knew this issue exists, but it’s not the most visible aspect of the problem. What you definitely saw more of was dogs with limps, and dogs with bite injuries.

LD: Was the shelter doing anything about the dogs’ injuries?

MC: There was a fire in Valparaíso [Chile] that had occurred within a few weeks before we got there. Stuka had gone there because not only were there people stuck in houses, but there were also pets stuck in houses. There was one dog specifically that had very bad burns on its paws that they were taking care of.

DK: We also spoke with animal rights activists and a bite victim. People’s opinions were split. Some people think that dogs are wild animals and the street is their home. Others think dogs are domesticated animals that can’t survive in the wild without human love and contact.Most young adults seemed to think that the dogs should be out in the wild. It seems like there is a lack of education among youth regarding this issue.

LD: What did the bite victim have to say?

DK: He felt that it was O.K. that the dog did that to him, because it wasn’t the dog’s fault. I think he had stepped on the dog, and the dog attacked him because it was dark outside. 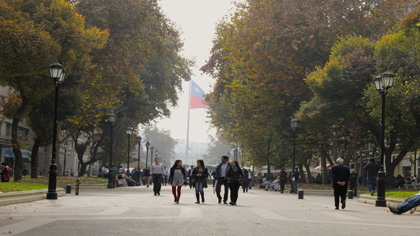 All photos featured in this article:  courtesy of Timothy Nagle