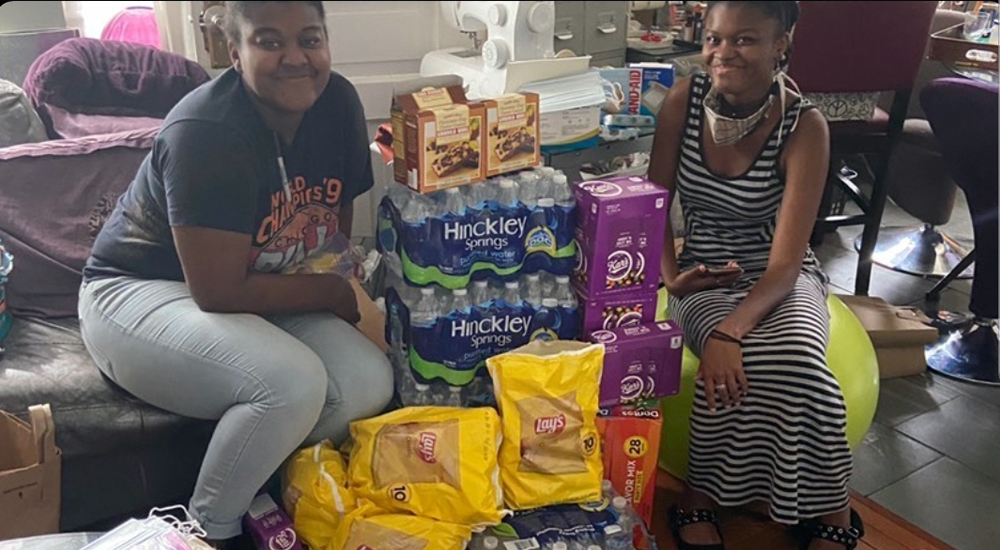 Indonesia Dixon and her sister, Farj Jaco, with some of the supplies they purchased through funds raised by their organization.

Loyola student Indonesia Dixon, a junior Film and Digital Media major, recently started a not-for-profit organization to collect funds and distribute food, beverages and medical supplies to peaceful protestors marching against racial injustice. This is her story, in her words:

The death of George Floyd flipped a switch in everyone across the nation. When I came up with the idea for the Chicago Protest Funds Collective, I had been battling a sickness for the last week and wanted to support the cause while being unable to protest myself. Then I had the sudden idea to start a fundraiser.

A group of friends and I came together within two days to bring the collective to life. Everyone has come together to utilize their personal skills to make this collective a success. I am also working with other Loyola students/alumni such as John Mbi, Ada Agba, Marian-Clare Wick, Mofetoluwa Ogunsola, and Megan Yamauchi.

The Chicago Protest Fund Collective (or CPF Collective for short) was started May 31. Our mission is to supply protestors with immediate needs such as snacks, water and medical supplies. We believe that protestors are essential workers and they are frontline fighters against injustices, so we stand with them and we support them.

We started accepting donations June 1, and have raised over $1,000 to help protestors. We gave out our first packages last weekend. We collaborated with another Chicago foundation named Power DeJour and their affiliate Caprice Guy to help pass out supplies. Power DeJour helps protestors by passing out medical supplies to help aid the effects of tear gas. We will also be working with Ashley Munson and her affiliate Rajah Matthews for their Million Man March in Chicago on June 19 – or Juneteenth.

We also run social media pages to update people about protests going on throughout the city, how to take care of themselves during these times, and the progress being made within the collective and the world.

The CPF Collective understands how important the spread of information is, especially in a time where there has been an increase in propaganda. As we grow and continue our work, we plan to also help communities that have been impacted by Covid-19, looting, and police brutality.

Our ultimate goal is to help everyone that has been oppressed, fighting oppression, and do what we can to ensure a better Chicago and then a better world. We are currently looking for volunteers to help with transportation of supplies and people who want to help pass out supplies at protests.

We can be reached at: chicagoprotestfunds@gmail.com

We accept donations through: