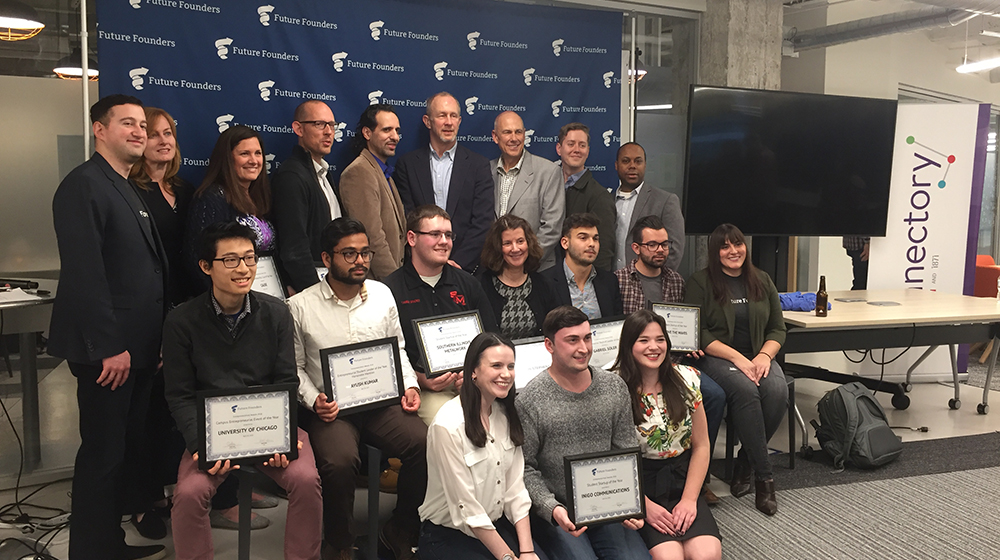 The EntrepreneurshipU Awards are held through 1871 a tech-incubator housed in Chicago’s Merchandise Mart. This community work space is home to many startups, including a space for Inigo, and the student agency has received several clients from inside 1871’s walls.

Sophomore Midori Shelton, the current firm director of Inigo, said she hoped to win the Student Organization award. Shelton said Blaine Danielson, a founding member of Inigo and current account executive, had submitted Inigo into the competition, and she was initially shocked to have won.

“My initial reaction was shock, but at the same time I wasn’t all that surprised,” said Shelton, a Communication Studies major and Sociology minor. “We are high-functioning and [we have] such a hard-working group of people so it doesn’t surprise me in that sense.”

Danielson said the Inigo team, which currently consists of 19 students and 11 apprentices, is what makes this firm so successful.

“Some of our biggest success comes from the people who are in it [Inigo], and being able to give them this real-world work in a class setting,” said Danielson, an AD/PR major and marketing minor.

The name Inigo was chosen as a homage to St. Ignatius, the founder of the Jesuits, since Loyola is a Jesuit institution.

“I had never been in that sort of leadership position before … and [I overcame this obstacle by] just doing it and realizing we’re in a learning situation and that’s what this is for — learning to grow from any mistakes that we make,” Danielson said.

Inigo since its beginning has helped three companies per semester, and this year Burgundy Fox will be the first company to continue using Inigo past the year. Inigo is growing rapidly, and this year it has won the PR award of excellence during the Loyola School of Communication (SOC) AD/PR reception.

Shelton said next semester Inigo will be adding a creative director to the staff. And account teams will be evenly divided between creative majors and AD/PR majors to adjust to the clients’ feedback and meet their needs.

“I think we have the ability now to grow internally and have a greater presence in the SOC and our general campus,” Shelton said.

Danielson said Inigo’s branding is “Igniting Conversations.” And, to ensure the brand remains the same through staff changes each semester, a handbook was developed as a guide to everything within the firm.

“[Inigo’s brand and goal is] creating conversations between everybody,” Danielson said. “[Conversations] between Inigo and Chicago, Chicago and our clients and us and our clients. We want people talking about Inigo and we want to talk about the SOC and get people to understand and see … make everyone aware of each other.”

Since Inigo is a fully functioning firm, it takes in revenue as deliverables are presented to the clients. This revenue stays within Inigo covering the expenses of the firm.

Shelton said she cannot gauge exactly how Inigo will grow with time, but it has quickly grown since its start and the awards are a reassurance that the work it is doing is important, unique and necessary.

“I think Inigo is … is Chicago’s only student-run consultant agency. Truthfully the sky is the limit or us … we are as close to a fully functioning agency as we can be,” Shelton said. “We’re building a lot of relationships with 1871 … [the Student Startup of the Year award] is putting us on the map and it’s reassuring that the work we’re doing is being recognized.”

Shelton said the most difficult aspect of being the firm director is leading a student-run firm and keeping that boss relationship with her close friends.

“As the firm director, Inigo is fantastic because it is a student run agency … but you’re also overseeing the operations that are being led by your peers,” Shelton said. “You don’t want to say to say to your best friend of three years “business is business” but you have to.”

Inigo is scheduled as a class under COMM370 and it will be permanently in the curriculum starting next year. The class is run by Professor Cheryl McPhilimy and it meets Thursday from 4:15-6:45 p.m.