Students and employers get down to business at SOC Career Fair

Students mingle with employers who set up shop at circular high tables, exchanging their resumes and elevator pitches for information about open positions and the opportunity to rub elbows with industry insiders.

It’s an event that builds students’ confidence, and ultimately, helps them find jobs and internships. At this year’s career fair on Jan. 31, about 225 students engaged with 41 employers from various communication organizations, including Jellyvision, the Chicago Tribune, IZEA Inc. and AgencyMSI.

India McMiller, a senior journalism major preparing to graduate in May, said she gained a lot from talking to representatives from 22nd Century Media, The Daily Herald and Green Building & Design magazine. The biggest challenge, though, was initiating conversation, McMiller said.

“It was intimidating at first, but I just said I had to go for it; this is what growing up is about,” she said. “After the first employer that I talked to, I got more comfortable and confident.” 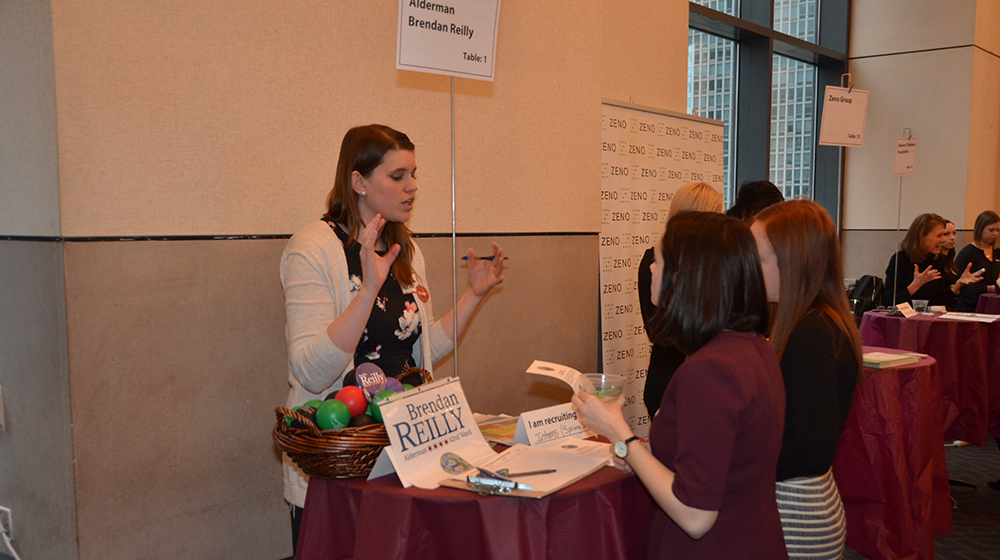 Loyola alumna Erin Baumann, the constituent service manager for 42nd Ward Alderman Brendan Reilly, attended the fair to recruit for the office’s internship program. Stationed at table No. 1, right where students entered the event in Kasbeer Hall, she said she understood how nervous they might have felt.

“It’s fun being on the other side of the table now. It’s a lot less pressure,” she said. “I think if you ask any of us that have an alum sticker on, we kind of know … what it’s like to be in your shoes. I try and have a conversation because I was there once. We know where you’re coming from.”

Fortunately, for junior creative advertising major Bridget Burley, chatting with employers wasn’t unfamiliar; she already had two years of attending the Career & Networking Fair under her belt. The first time Burley ever attended the event, she said, she was required to help set it up.

“Interesting enough, that one that I was forced to go to was the one I did the most networking at because I was there before everyone else,” said the 21-year-old. “So, I got more one-on-one time with the employers, and so they recognized me at the end of the day.”

Burley said she wished she’d prepared for this year’s event by formulating more questions in advance. Still, she discovered employers that stood out to her; particularly Jellyvision, an interactive software company, which told her about the firm’s culture and gave her a kazoo. 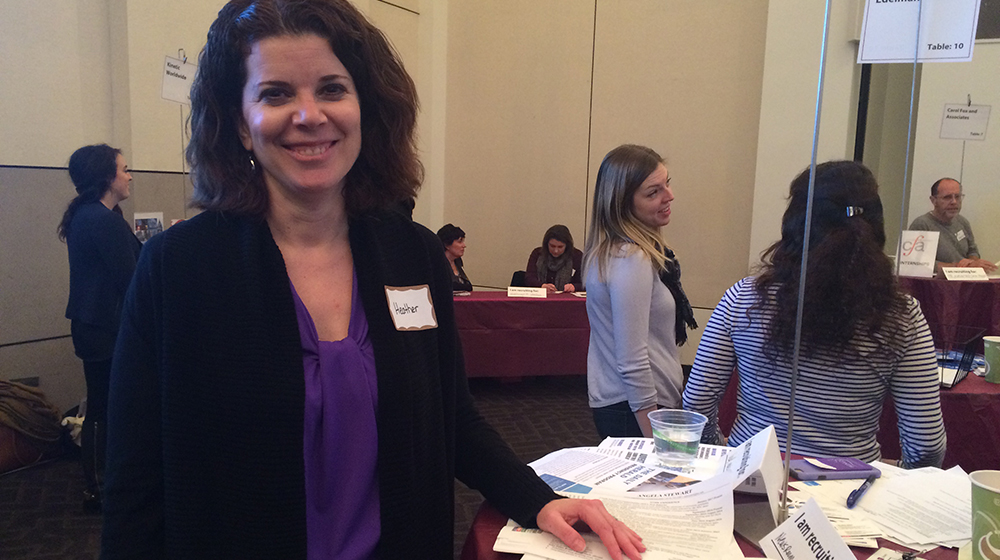 What makes a candidate really shine, according to Heather Ritter, the vice president and director of human resources for the Daily Herald Media Group, is one characteristic in particular: tenacity.

For a Daily Herald intern, Ritter said, that means “somebody who’s really driven to write a good story, to get the facts right, and also somebody who understands the importance of local journalism.”

Loyola students in particular demonstrate a work ethic that is especially valuable to employers, according to Loyola SOC Dean Don Heider.

“Once an employer hires one of our students or even has them as an intern, they often want another one,” Heider said. “I don’t think our students have a tremendous sense of privilege. I think they understand the value of hard work. I’ve been told by recruiters that it’s a marked difference from other schools.”

It wasn’t only recruiters and current students who showed up to the career fair. Two class of 2015 alumni, Bill Theis and Christine Chu, are former classmates who reunited at the event and caught up with one another in the crowd. 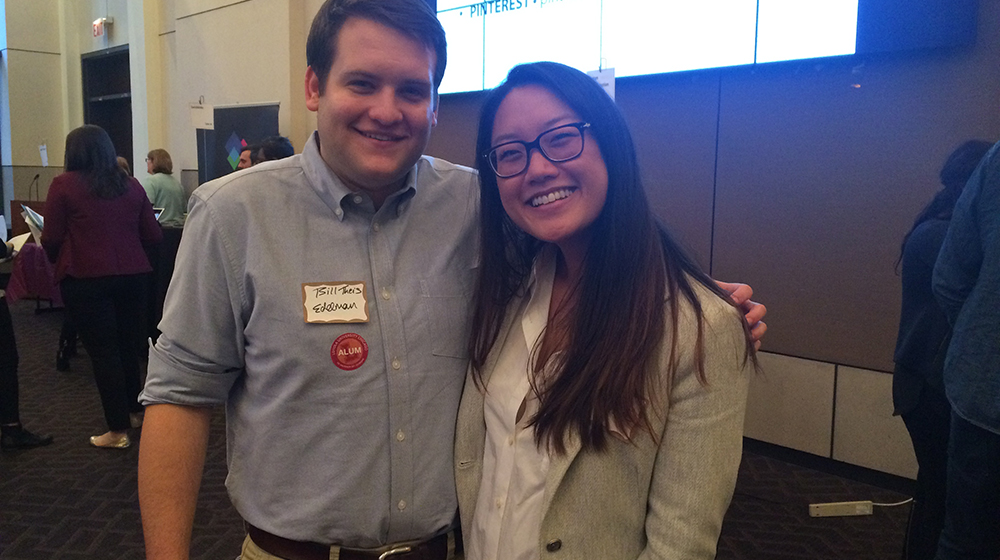 Theis is now an assistant account executive at Edelman, and he manned the communications marketing firm’s career fair table to look for summer interns. Chu, an advertising sales assistant for Better Homes and Gardens magazine, said she attended the event because she heard about it through SOC Administrative Assistant Michelle Bukowski.

Theis and Chu were among many Loyola alumni and graduate students who attended, but the SOC’s Dean Heider said there’s one important group the Career & Networking Fair is somewhat lacking: undergraduate juniors and seniors.

“The one thing that does drive me crazy still is why every senior does not come,” he said, explaining that the SOC doesn’t schedule classes for late Tuesday afternoons during the spring semester to work around the career fair. “This is such an important opportunity that not going, to me, is just inconceivable.” 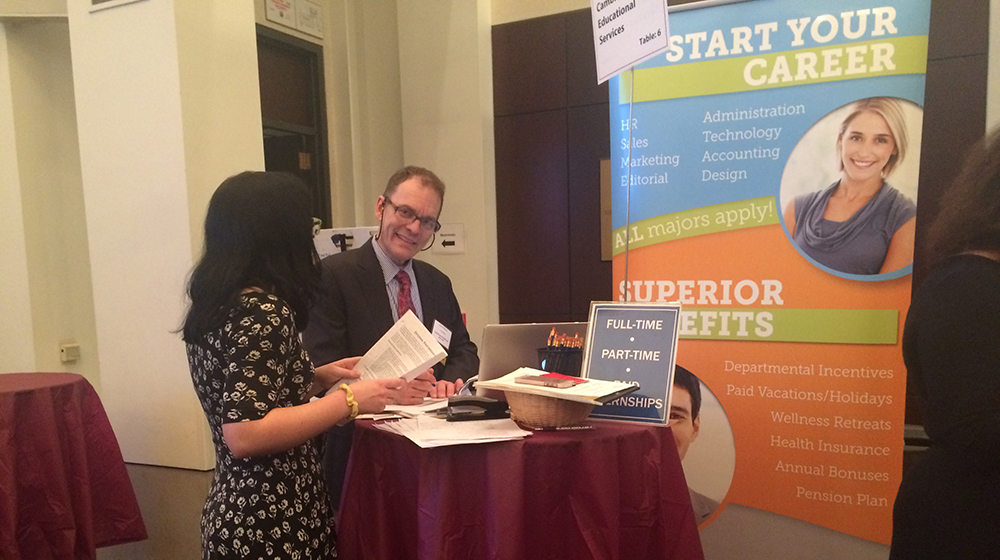 With graduation “coming like a freight train,” as Heider put it, Loyola senior McMiller is one upperclassman who did try to make the most of the career fair. She said it was the first step in her job search and seemed invigorated after meeting so many employers.

“Today was the day,” she said. “I’m really thankful that the School of Communication is so great about providing different opportunities for us to learn more about the workplace and really start putting our names out there … They come to us with all of these great resources, and we just have to take advantage of them.”