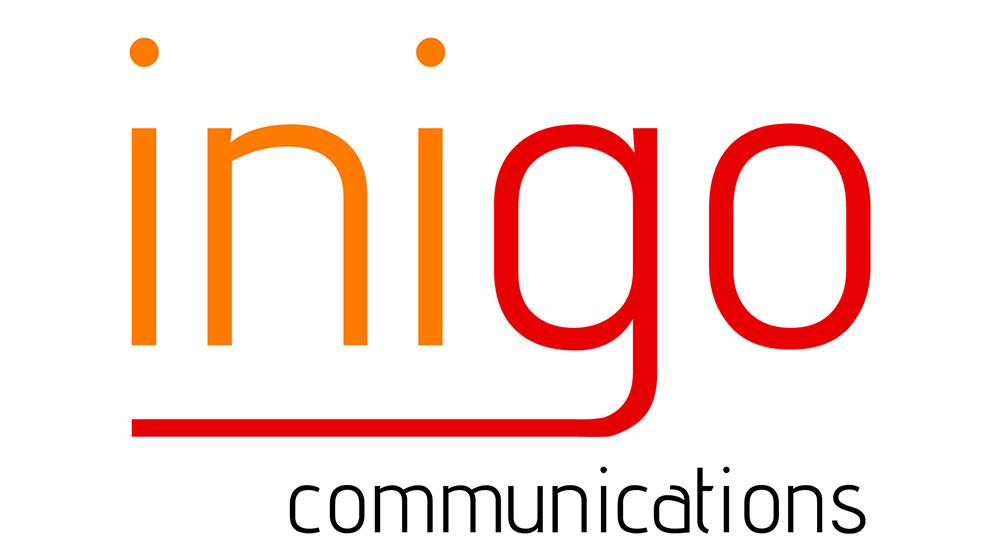 Students have taken the reins at Inigo, a new student-run communications firm operated within Loyola’s School of Communication.

The agency is technically a class, but it’s much more than a three-credit course for the students involved; they’re taking on real-life roles, consulting professionals and building a firm from the ground up. 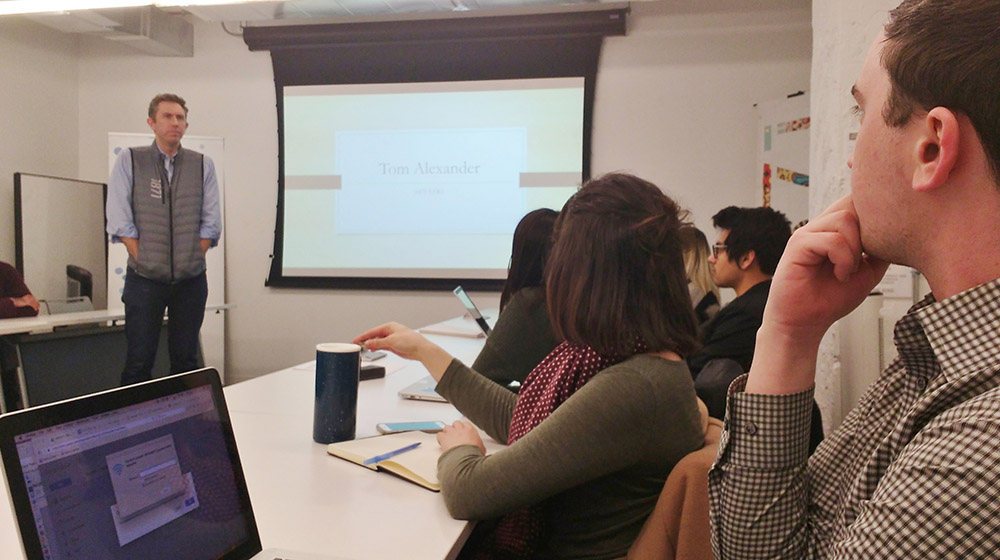 “It’s like work that you’re really passionate about,” said Inigo Firm Director Blaine Danielson, 21, a junior AD/PR major. “We’ve started this. We’ve put so much time and effort into this … I don’t think I’ve ever believed in something as much as I believe in Inigo.”

The agency’s name reflects that enthusiasm: it contains the words “In I Go” to represent how members are diving headfirst into their work. Inigo is also the baptismal name of St. Ignatius of Loyola, a nod to the firm’s founding university.

For this first semester, Inigo’s sole client is itself, and it aims to build its brand and foundation before accepting clients next school year, Danielson said. The 16 agency members, who range from freshmen to seniors, are divided into four teams modeled after the ones used at PR firm Golin: catalysts, creators, connectors and explorers. 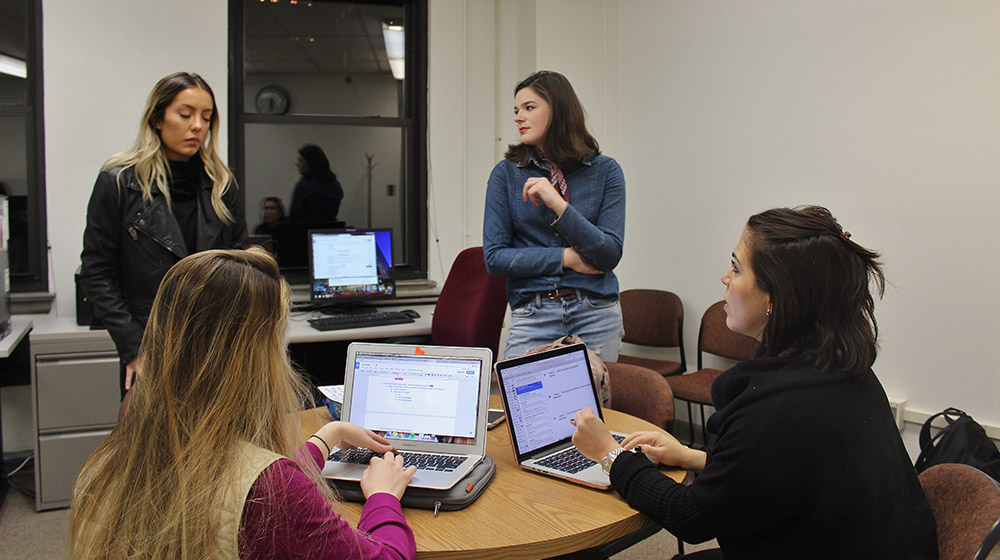 “The work is split up based on what people think are their strengths … people are able to explore different aspects of agency life and what it takes to develop an agency,” said first-year AD/PR major and connector Chloe Bierut, 19.

In these groups, the students oversee all facets of operation. Creators are responsible for creating a style guide, logo, tagline and website; catalysts focus on internal business such as preparing client forms and developing firm procedures; connectors cultivate the work culture and handle personnel matters; and explorers research the industry landscape and potential clients.

Account supervisors lead the teams, which come together in weekly staff meetings during the designated class period on Thursdays from 4:15 to 6:45 p.m. They meet in the classroom and once or twice a month at 1871, a tech startup incubator in Merchandise Mart, but connectors including sophomore Sammi Wee are transforming two rooms in Lewis Towers into Inigo’s own lively office space. 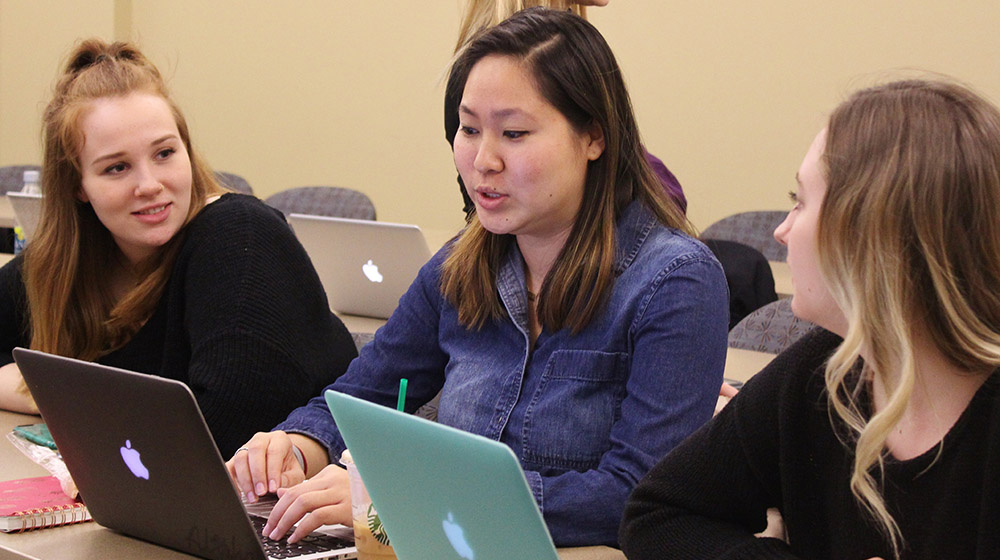 “I actually want to start my own event planning company, and so I think this is really right up my alley. I love that fast-paced environment of learning as you go,” said Wee, a 19-year-old AD/PR major and the connectors account supervisor.

In the fall, when Inigo plans to take on clients, its structure will change accordingly. The details of new positions and a possible operating budget are being determined in real-time for this new undertaking because there aren’t established guidelines for student-run firms, said Inigo instructor and faculty advisor Cheryl McPhilimy.

“A lot of it’s uncharted. That’s part of the fun and the challenge,” said McPhilimy, who has prior experience launching her own agency. “We’re figuring it out as we go.”

Inigo will still consist of a firm director and four account supervisors that each have a client, according to Danielson, but the members plan on adding three assistant firm director positions to handle new business, internal business and finances.

Another task in the works is considering compatible future clients. Danielson, who is also a catalyst, said Inigo is interested in working with businesses that want original thinking from a fresh millennial perspective.

“We want someone who’s not afraid to get out of the box and push the envelope,” she said. “For right now, we’re probably going to be looking at more of the startup industry because they’re very closely aligned with us. We are just starting as well.” 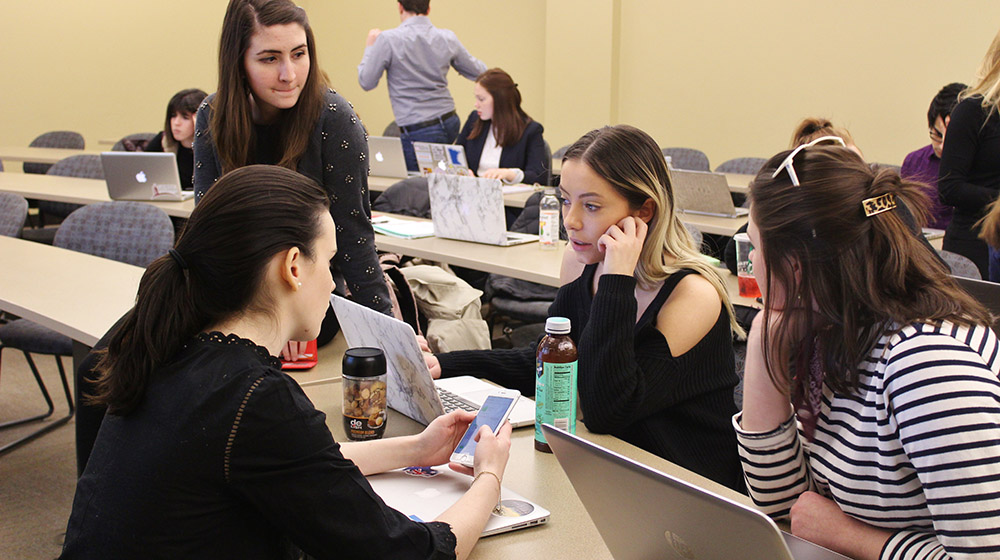 Although some universities have led student-run firms for years, the concept is gaining momentum across the country, said McPhilimy, who researched nationally affiliated programs to brainstorm best practices for Loyola’s agency.

“There are a handful of schools that have been doing it for a decade or more, but a lot of programs are looking at it because it does give students that ability to take what they’re learning in class, put it into practice and get results. It’s bringing it all to life and making it real while they’re still in school,” she said.

Inigo is now in the process of reviewing applicants for next semester. Wee said the firm looks to bring on around eight students with diverse talents who are just as driven as the current members.

In the interest of growing students’ skills and offering continuity for clients, the agency is exploring ways to enable members to stay involved across their years at Loyola. Possibilities include earning repeated credit or contributing as freelance volunteers, according to Wee. 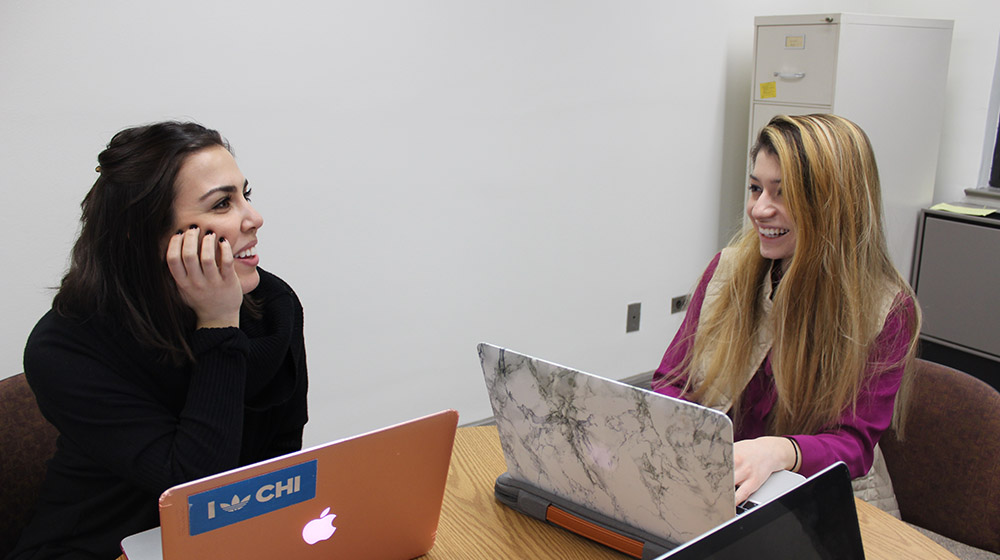 By the end of the semester, Wee said, Inigo members hope finalize all the resources needed to take on clients right away when classes resume in the fall. On April 24, the students will show off their firm to the SOC dean and faculty, new agency members and Loyola’s PRSSA.

Danielson, who plans to intern with J. Crew in New York City this summer, said she thinks the teamwork and leadership skills she’s learned through Inigo are what landed her the internship. While she has lofty ambitions for herself, she also has high aspirations for the agency.

“I hope that someday we’ll basically be competing with Leo Burnett. I want to compete with the biggest firms … to have the same quality work, the same amount of professionalism but still keep it fresh and unique,” Danielson said. “I’m dreaming big. And I think that with enough dedication and drive and passion, Inigo will be incredibly successful.”