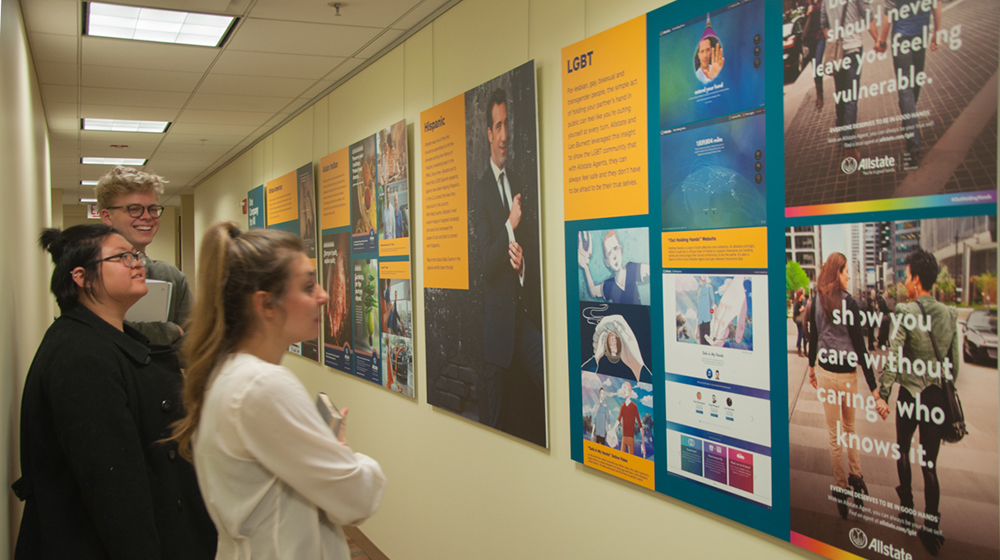 You’ve seen the advertisements played during major commercial events from March Madness to the Super Bowl, and now you can see the history and evolution of one of the country’s most popular ad campaigns showcased on the walls of the School of Communication.

The Loyola community gathered in the SOC on March 3 to unveil the new exhibit titled, “Good Hands. Great Advertising,” presented by Allstate Insurance and its advertising agency, Leo Burnett Worldwide. These two Chicago-based companies have been working together for over a half-century to create campaigns, including Mayhem, one of the most recognizable characters in modern advertising.

“I think it’s really great to share the history of our work with the next generation of advertisers and communicators.  I hope that this exhibit inspires Loyola students to pursue greatness in their field,” said David Brot, Executive Vice President and Account Director at Leo Burnett.

When the SOC moved into the building at the Water Tower Campus almost a decade ago, Dean Don Heider intentionally kept the walls bare so they could be used to showcase different media projects, whether student or professional.

“We haven't done an advertising exhibit in a few years, and given that Advertising/Public Relations is our biggest major in the SOC, it made sense for us to reach out to Leo Burnett. But, the main thing is that it's for all SOC students. There’s aspects of all types of media – video, radio – in the exhibit that demonstrate how to reach an audience,” Meghan Ashbrock, Events Coordinator, said.

With our continually changing culture and developing technologies, the avenues to reach that audience need to also adapt. In the exhibit, students can see how these advertisers have been trying to do just that.  The Mayhem character now has a Hispanic counterpart, La Mala Suerte, for a Spanish-speaking audience. In addition, the campaign has transitioned to target consumers of online video and television.

“Frankly, all advertising should speak to the diversity of the world. Looking at this exhibit and the history of the campaign, it puts into perspective how far we’ve come, and most importantly, where we are going,” said Lisa Jillson, Marketing Director at Allstate Insurance.

As SOC students continue with their classes and projects this semester, they will be able to study the storied history of a successful partnership between two internationally renowned companies.

“This is really an educational exhibit, so throughout it, there are lessons to learn.  That's what you come to Chicago for, that's what you come to Loyola for, to really have the opportunities to engage with experts in your desired field. It's a way to tie-in academics with the real world. You will be able to see in the exhibit what the advertising looks like from an idea to the execution,” Ashbrock said. “We hope that it’s very aspirational for students.”