Two editorial cartoonists from opposite sides of the political spectrum come together in the same room for the Great Cartoon Debate, hosted by the School of Communication, the University Libraries, and the Chicago Tribune.

On April 15th in Corboy Law Center’s Kasbeer Hall, Scott Stantis from the Chicago Tribune and David Fitzsimmons from the Arizona Daily Star engaged in The Great Cartoon Debate. Don Wycliff, retired School of Communication faculty member and the former public editor for The Chicago Tribune, moderated the event. 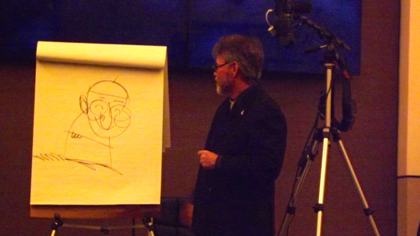 Before Stantis and Fitzsimmons began their pictorial sparring match, they each gave a presentation about their careers and the importance of their work.

Fitzsimmons, who identifies as a Democrat, has worked at the Daily Star for almost 30 years, and his cartoons are syndicated by 700 newspapers.

Stantis, who identifies as a conservative, has worked for the Tribune since 2009, and has developed a strip entitled “Prickly City” and a well-known caricature of Rahm Emanuel (he uses the Grinch as one of the guides for his features).

Stantis illustrated the power of editorial cartoons through a series of timely examples, from the attack on Ali Farzat, a Syrian political cartoonist, to the shootings at the Charlie Hebdo office in Paris. He said that nothing else can create controversy like images can, and said that some cartoons are “like a stick in the eye and some are like an electric shock.”

Wycliff said that the Charlie Hebdo attack made the debate all the more pertinent, but “the fact of the matter is news and commentary are important all the time,” he said. “It’s important for people to understand how these things are done.”

Both cartoonists discussed the criticism they have received. Stantis said that the Tribune often receives complaints that “he can’t draw and he isn’t funny.” However, both have faced more serious threats as well. Stantis and Fitzsimmons have received multiple death threats during their careers, and Fitzsimmons noted that he has had to issue restraining orders. This served as a sobering reminder than even in a country where we pride ourselves on the freedom of expression, it can still be a dangerous profession. 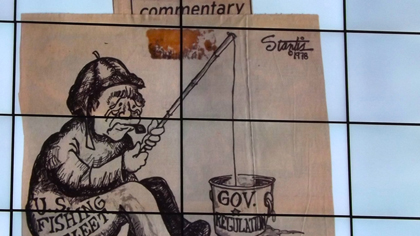 “I think both David and Scott really touched on the power of their work. This is a form of storytelling that no one really talks about,” said Meghan Ashbrock, who managed the event. “I think there’s a lot of power in imagery and I don’t know that political cartoonists always get that type of attention,” she said.

The artists also discussed their respective creative processes. Fitzsimmons said he starts with the written word; he writes a humor column for his paper, and often draws ideas from it. Stantis said that the process is different every time, but he starts by thinking of what symbols can best represent what he is trying to say.

During the draw-off, the cartoonists were asked to create a series of famous figures, from politicians like Ted Cruz and Hillary Clinton, to their choice of pope. Each was able to draw Obama in under a minute and 25 seconds. They also managed to throw punches at each other between questions. At one point, Stantis wrote “bomb-throwing radical” with an arrow pointing to Fitzsimmons, who responded by pointing to him as an “old poop.”

An audience member asked how the rise of technology has affected their work. Stantis said that there are certainly a number of excellent web cartoonists out there, but the profession is changing.  He said that there are less than 40 editorial cartoonists working in the country at this point, but that it is important to be persistent.

Jessica Lodzinski, a junior journalism and global and international studies double major, was encouraged to attend the debate by her instructor Dodie Hofstetter, who works with Stantis at the Tribune. “Seeing how powerful just their images can be…you can have a reaction right away… they take a beating and really put themselves out there,” she said.

While many opposing views were shown during the evening, the two artists are actually friends. As Stantis said, “we don’t share the same politics, but we share the same values.” He said what they disagree on, and where the fun of the debate comes in, is the way to fix social problems. Cartoons are just one way to start the conversation. “This is magic…and it’s coming out of our hands,” Stantis said.