There’s finally a catch-all answer to the dreaded question, “What are you going to do with your major?”

According to WGN Radio host and former Red Eye publisher Amy Guth, the only proper response is, “Anything I want.”

And that idea just might ring true, if students follow the wealth of advice provided by panelists and professionals at Loyola School of Communication’s Career Week, which culminates in a Networking and Career fair on Tuesday, January 31.

Guth, a panelist at the first event of Career Week, was joined by four other communications experts who shared their tips on breaking into the field. 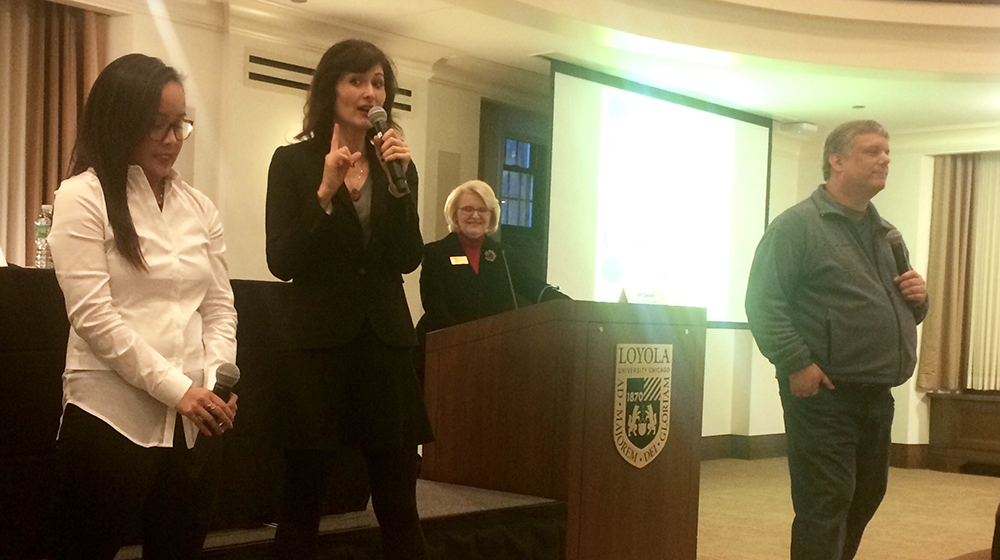 Students heard from Keeperbin Media editor Chuck Floramo, whose experience includes working as a senior editor on “The Oprah Winfrey Show” for nine years, and Loyola alumni who were in their shoes not that long ago: Erin Jordan, an account director at Walker Sands Communication; Nicole Camacho, an assistant account executive at Leo Burnett; and Jatika Expose, a sales assistant at WGN Radio.

Expose kicked off the conversation by encouraging students to “network, network, network” and stay in contact with professionals – a tactic that landed her a full-time job just two weeks after she graduated.

“I can’t tell you how important that is,” Expose said. “Those kinds of [connections] are what’s going to propel you to get a job – it’s asking questions, it’s taking business cards, it’s saying, ‘Hi,’ it’s being present.”

Jordan agreed that networking matters; someone she met through Loyola’s chapter of the Public Relations Student Society of America (PRSSA) helped her score an interview with Walker Sands. Completing several internships throughout school and planning events for Loyola’s Department of Programming also set her up for success, she said.

“You can’t get experience until you have experience. Loyola has a ton of opportunities to get experience that you can use to help get in the door at some other places,” Jordan said during the panel discussion. “It all starts with getting experience and figuring out what you want to dip your toes in and who can help you get there.”

Taking social media seriously is another way to stand out to employers, according to Guth, who is the president of the Association for Women Journalists - Chicago. For both offline and online matters, she explained the importance of working hard, being assertive and acting confident.

“You absolutely must not be afraid to hustle,” Guth said. “I feel like every job I’ve had, every big career move is just because I busted in there and said, ‘This is why you should hire me.’ 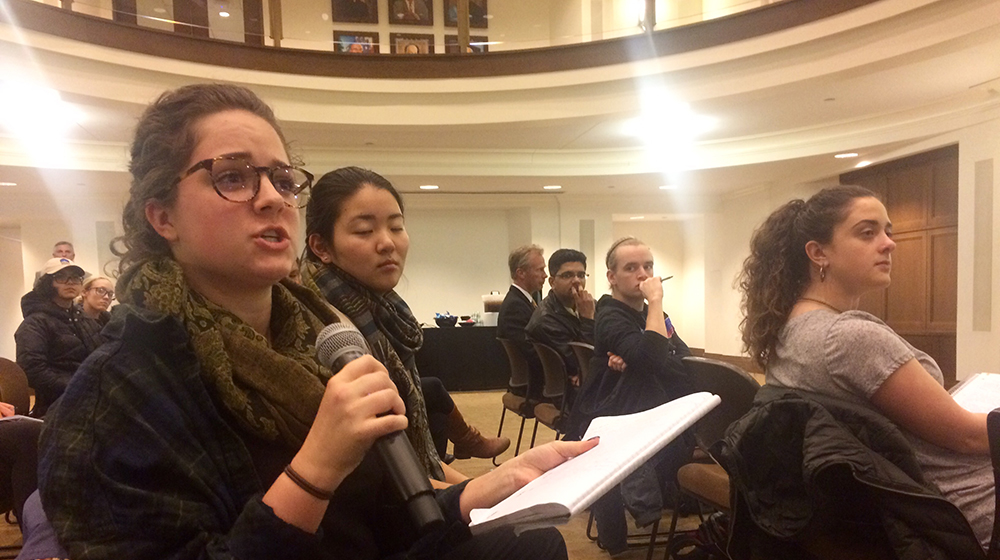 After a Q&A session with the panelists that covered striking a work-life balance, what the “it” factor means, whether a teal resume is a good idea (it depends on the position), and how communication skills can help serve social justice, students got to see exactly where they could put that insight to use.

Turner Broadcasting System, the media conglomerate behind CNN, Cartoon Network and the Bleacher Report, held a recruiting information session following the panel and dished out helpful tips for applicants, including how to not wear pants during an interview and still manage to land the job.

The recruiter said including key words from a job description can send a resume past filtering software and into human hands, avoiding the apparent “black hole” where most resumes end up.

Offering even more guidance on how to get noticed among a swarm of resumes, about 22 professionals from organizations including the Chicago Tribune and Lincoln Park Zoo critiqued students’ resumes during a workshop the second day of Career Week. 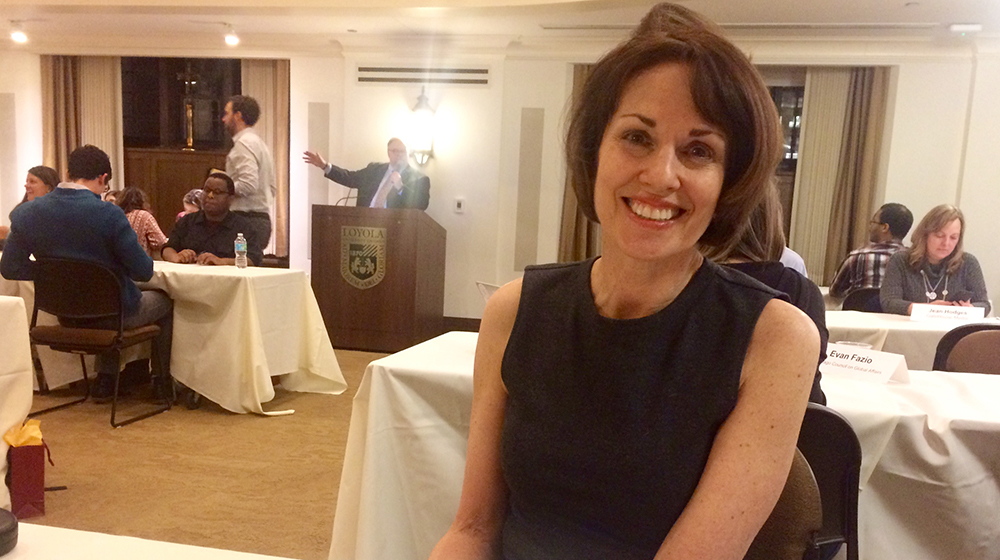 Merrill Financial Communications Principal Linda Shuman, who has experience writing resumes for high-level executives, echoed Tuesday’s panelists by saying a resume should showcase accomplishments – not tasks – and include numbers whenever applicable.

“A lot of resumes will focus on responsibilities,” Shuman said. “Resumes should focus on your achievements … Tell people what are the two or three things that you did on the job that made a difference – that you’re the most proud of.” 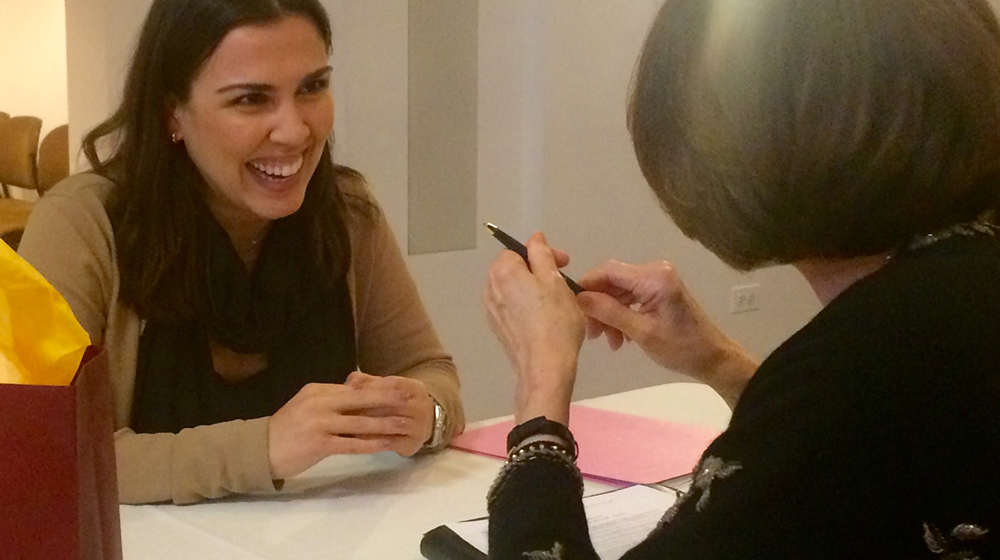 Loyola senior Adriana Geday sought feedback from Shuman during the workshop, one of many ways she aimed to prepare for the upcoming career fair. She also attended Tuesday’s “Breaking In” event and said she found it comforting to see several Loyola alumni on the panel because she’s starting to search for her own post-grad opportunities.

Geday, an advertising and public relations major with a minor in marketing, said she plans on attending the career fair in order to connect with Chicago PR firms. The San Diego native said her preparations for the event would entail attending the third Career Week session, “Tailoring Your Toolkit,” to learn LinkedIn strategies and get a professional headshot taken free-of-charge.

“I’ll probably do a lot of research on the companies that I’m most interested in, to be able to know what questions to ask and to have some topic of conversation,” said the 21-year-old. “I would love to shoot for Edleman – for the big ones – but, well, who knows?”

Although finding a job or internship might seem like a daunting task – especially while networking at the career fair with representatives from more than 40 reputable companies, including Edleman, ABC7 Chicago and Jellyvision – students can think back to Guth’s encouraging words of advice: “You don’t need to be fearless. Feel the fear, just do it anyway.”