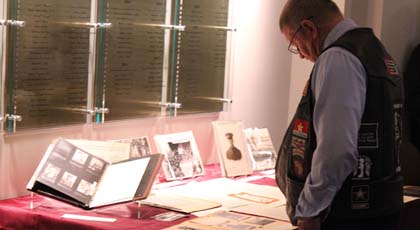 It was a bittersweet experience to be in Regents Hall on Friday night. Veterans, students, faculty and alumni attended the screening of V-Day 11.11.11, a non-profit documentary produced and directed by Loyola’s own John Goheen and Aaron Greer.

The film compiled the stories of something around 30 veterans or military families, giving a heart wrenching sense of reality to the dedication and sacrifices that the public often doesn’t see.

Goheen, who is a veteran himself, contacted filmmakers and photojournalists‌ around the world to help him gather these stories. On 11.11.11 these filmmakers volunteered their time and skills to document these histories. Now, a year later, the film has aired on multiple PBS stations and has been screened at different events across the nation.

Goheen said, “This film for me was sort of intended to bring honor and recognition to veterans who have served this country. A very small percentage of Americans end up serving in the military, so I sort of thought this was something that was healing and to bring attention to this part of our society that many people don’t even know about.”

As to be expected, the film was overwhelmingly sad at times. However, one particularly moving portion of the documentary told the story of Don and Robin Pannier who started the Fallen Heroes Traveling Memorial Wall. The wall has the pictures of around 260 Illinois servicemen and women who lost their lives in name of their country, including a picture of their son, Army Spc. Phillip J. Pannier. Phillip died during Operation Enduring Freedom in Iraq in 2008.

Don and Robin were present on Friday to see their own story on screen for the first time. Don and Robin started the wall to commemorate their own son and to reach out to other military families trying to cope with the tragedies of war. They said it has been helpful in bringing them closer to people who can relate to their loss. Robin said she could relate to another mother she saw in the film.

She said, “It’s kind of like the mother said in the film, ‘When I sit at home I cry by myself,’ when we get out with people we can laugh and we can joke. And that’s why you get out and do what you do, so you’re not at home crying.”

Don said that he travels with the wall not only for his own son’s memory, but also for all the men and women that have lost their lives.

“It’s helped to talk about it, to be involved,” Don said. “A mother I was with yesterday at a high school, she’s thanked me several times for not forgetting her son. We’re hoping to touch the rest of the families.”

Also in attendance was Yun Tai, who started his first semester at Loyola within weeks of returning from his deployment in Iraq. He said he felt the film gave a voice or a human side to veteran that somehow gets overlooked.‌ 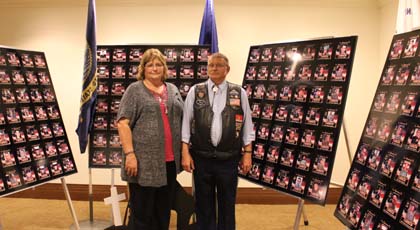 Tai recounted his own transition from soldier to civilian starting with his drive from Ft. Bragg, NC to his hometown in Muenster, IN.

“You don’t even know how to transition,” Tai said. “ When I passed the Virginia mountains driving home, I would scan them for snipers at the top. When I passed trash bags or stuff in the middle of the road sometimes I would yell ‘IED! IED!’ and swerve a little bit.”

But he said that he was able to return back to “normal Yun” with the help of family, friends and Loyola faculty members.

Tai said, “It’s tough to get back into it, but with the help of a lot of friends, a lot of family and even a lot of faculty here at Loyola, a lot of them not even military… just being able to talk to people and relate your stories helps.”

Don Pannier said that the film would help him continue to share his memorial and to bring comfort to those who helped him with the project.

He said, “We’re honored to walk with it in the future, wherever it goes, I’m sure it’s going to keep on progressing upwards. Like I said, thank you to everybody at Loyola. All I can say is thank you for your hard work. It’ll be a great help for us when we take this film home.”