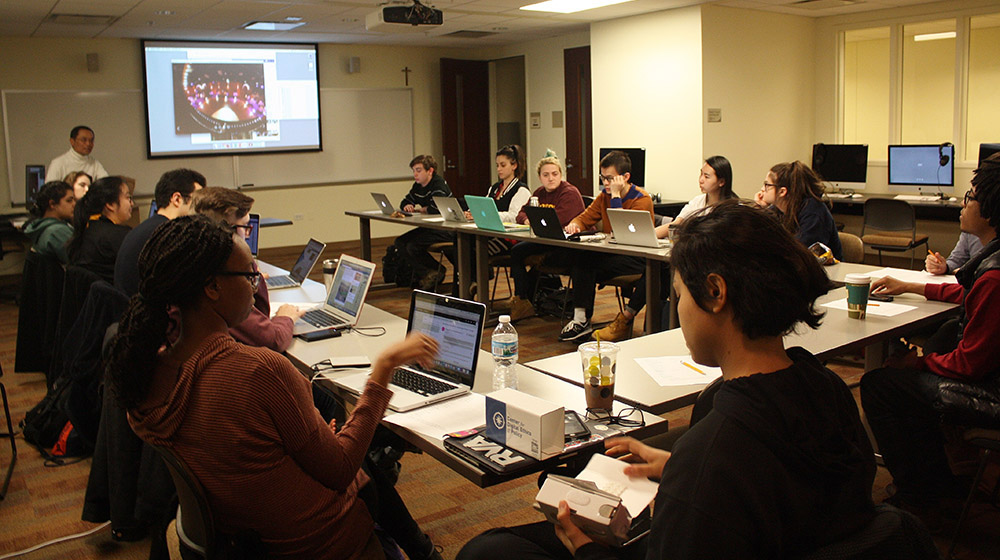 Professor Jamason Chen said he assigned “dialogue” as the theme of students’ midterm projects because VR creates dialogue between the creator and the camera, the camera and the environment, and the image and the audience.

That’s because VR technology is so new, and there’s so little teaching material on the topic, that experimentation and unsuccessful attempts are the best ways to learn, Chen said. He said he gives no quizzes, and the textbook for the course is suggested reading.

“I try to help [students] to break the norm,” he said. “I said, ‘Especially with this type of new medium, new challenge, I want you to challenge yourself. I don’t care if you fail. … Your failure will lead your success.’”

Chen broadly defines virtual reality as an immersive, designed imitation of real life that encompasses the 360-degree Ricoh Theta S and GoPro Omni cameras his students use. The 360 equipment works as the name implies: it provides an all-encompassing view of places photographed or recorded.

It also requires a 180-degree change in mindset and methodology, Chen said.

“With a 360, everything could happen at the same time,” he said. “It covers the whole environment … that’s a totally different visual language in storytelling.”

Given that wide scope, Chen said, producers have little control over the perspective viewers see; they simply choose where to set the camera. And unless they can duck behind something to hide from the camera, they’re part of the shot.

Although the lack of control can in some ways seem like a limitation, it allows communicators to show all surroundings without having to pan back and forth, Chen said.

“You give one angle, people just see what the story wants to tell them,” he explained. “Then what’s going on behind [the camera], no one knows. So you lose context. You focus on the content you want.”

Senior communication studies major Ryan Sorrell said he wants to use 360-degree video technology to contextualize social issues in Chicago. He said he’s considering using the 360 camera to compare police activity in the South Side to that of the North Side.

“[VR] makes journalism a lot more democratic or less able to be manipulated because people can look around,” said Sorrell, 21. “So it’s not like you’re cropping an image and only showing a police officer doing something or a protestor doing something.”

Sorrell said what he’s enjoyed most about the VR class so far was hearing a guest speaker discuss the possibilities of using VR technology in gaming, medicine, warfare and education.

“I think that once this technology becomes more affordable – because right now these cameras are crazy expensive – that it could be a really cool educational tool,” said Bolinger, 22.

Senior Melody Billedo said film majors like herself are tasked with figuring out how to use the technology for narrative. While traditional technology involves shooting scenes in different locations, the 360 camera seems better suited for stationary shots, she said.

“That’s where theater comes in,” said Billedo, 22, who is minoring in theater. “A narrative is told in a static space on set with the actors and whatever, and the audience interacting with them as well, and so I think it’s a good tool for film majors to get back into the theater roots that film has.”

For her midterm project, Billedo used the 360 camera to shoot the lighting design and set in Loyola’s Underground Theatre. She found that the glare was problematic but said it would be interesting to see how a 360 camera could transform live productions.

One of Bolinger’s experiments with VR proved challenging in a different way. She tried attaching a 360 camera to her cat, but the handheld device wouldn’t stay upright.

“I just thought it would be cool to experience what my cat experiences every day,” she said. “I didn’t really realize how hard it would be to rig up something like that.” 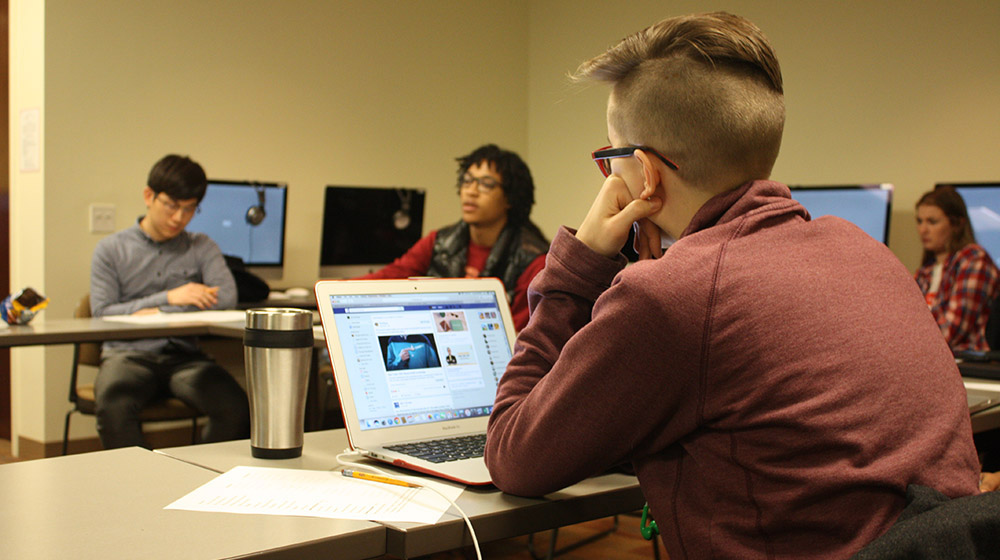 For her midterm project, Bolinger instead placed the camera on the floor and recorded the interaction between her cat and a dog. She and other students gave each other feedback on their midterm projects in class, but they also regularly collaborate on a course Facebook page by posting what they learn about VR outside the classroom.

So far, the students have gotten their hands on the $300 Ricoh Theta S camera and played with cardboard viewers, which are goggle-like devices that work almost like a kaleidoscope for viewing VR videos up-close with a smartphone. Chen said students will soon get to work with the more advanced $5,000 GoPro Omni.

For many of the questions this VR technology raises, there is “no answer, no textbook to give, no rules you can apply,” Chen said. But that’s why he calls his course “open mind and open source.”