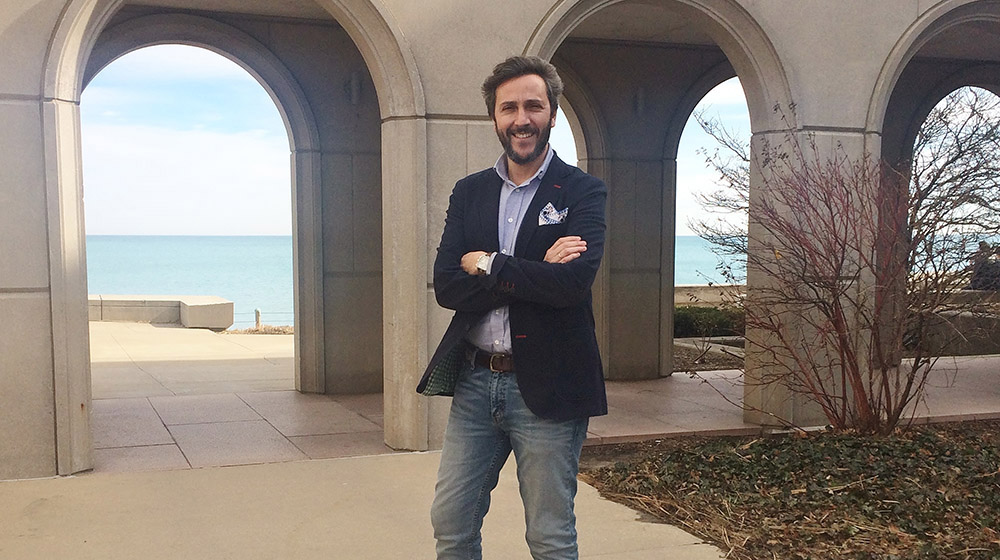 “Positive communication is not just something you say,” said visiting scholar José Antonio Muñiz-Velázquez. “You do it and you be it.”

José Antonio Muñiz-Velázquez was working at an advertising agency in Spain when he read “99 Francs,” a novel by French author Frédéric Beigbeder. The author, Muñiz-Velázquez said, insisted that advertisers don’t want people to be happy – because happy people don’t buy products.

Muñiz-Velázquez wanted people to be happy.

So he left the agency and began researching positive communication, a field where his backgrounds in psychology and communication intersected. He found a community of scholars absorbed in the topic.

Now, Muñiz-Velázquez said he’s collaborating with around 75 researchers from universities all over the world – including Quinlan marketing professor Linda Tuncay Zayer – to write a handbook on positive communication.

Muñiz-Velázquez’s research deals with two levels of happiness: hedonia and eudaimonia. He said hedonia essentially means to feel positive emotions – ‘happiness’ in the popular sense – while eudaimonia takes that feeling to a deeper level.

Eudaimonia means living virtuously – becoming happy rather than experiencing fleeting satisfaction – and is the focus of positive communication, according to Muñiz-Velázquez. He said it’s a concept that was explored by the ancient philosophers Aristotle, Plato, Seneca and Socrates, but now, two thousand years later, we have the science to back it up

“The question we can ask to all kinds of communication is the following: ‘To what extent are you helping the people to be more happy in terms of virtue?’ he said.

Muñiz-Velázquez conceded that, in the past, we might have seen advertising with more “selfish” values. But beginning about 10 years ago, he said, there was a paradigm shift – one exemplified in Dove’s esteem-boosting advertisements and in recent Super Bowl commercials, such as Airbnb’s “We Accept” segment.

“[Now,] we are watching another kind of advertising that also, of course, needs to sell products, but it’s not the same,” he said. “The Airbnb [commercial], for example, … we can say this is positive advertising in terms that it is selling Airbnb, but also with positive value – the knowledge of different people [mixing with] other cultures.”

The researcher found that commercials aren’t the only aspect of Super Bowl games with the potential to be positive; he discovered in his research that fan culture itself generates a feeling of belonging and is connected to intellectual development.

The happiness derived from actively participating in a fan community could be explained by additional research Muñiz-Velázquez conducted, which found that people who valued experiences over material objects tended to be happier, while materialistic individuals were more vulnerable to depression.

For companies, creating uplifting discourse alone isn’t enough to create authentic happiness, according to Muñiz-Velázquez, who said brands should also live out the values they promote.

The scholar applies that principle to his own life. For holidays and birthdays, Muñiz-Velázquez and his wife exchange experiences instead of material goods. This past Christmas, he paid for her to take a cooking class, and for him, she purchased tickets to events around Chicago, where he’ll be conducting research through the end of March.

In the coming weeks, Muñiz-Velázquez plans to be a guest speaker in classes, and hold a seminar on positive communication for faculty at Loyola Chicago.

In the years since Beigbeder’s “99 Francs” altered the course of his life, Muñiz-Velázquez has opened his second advertising agency in Spain and compiled research that counters the French author’s pessimistic outlook.