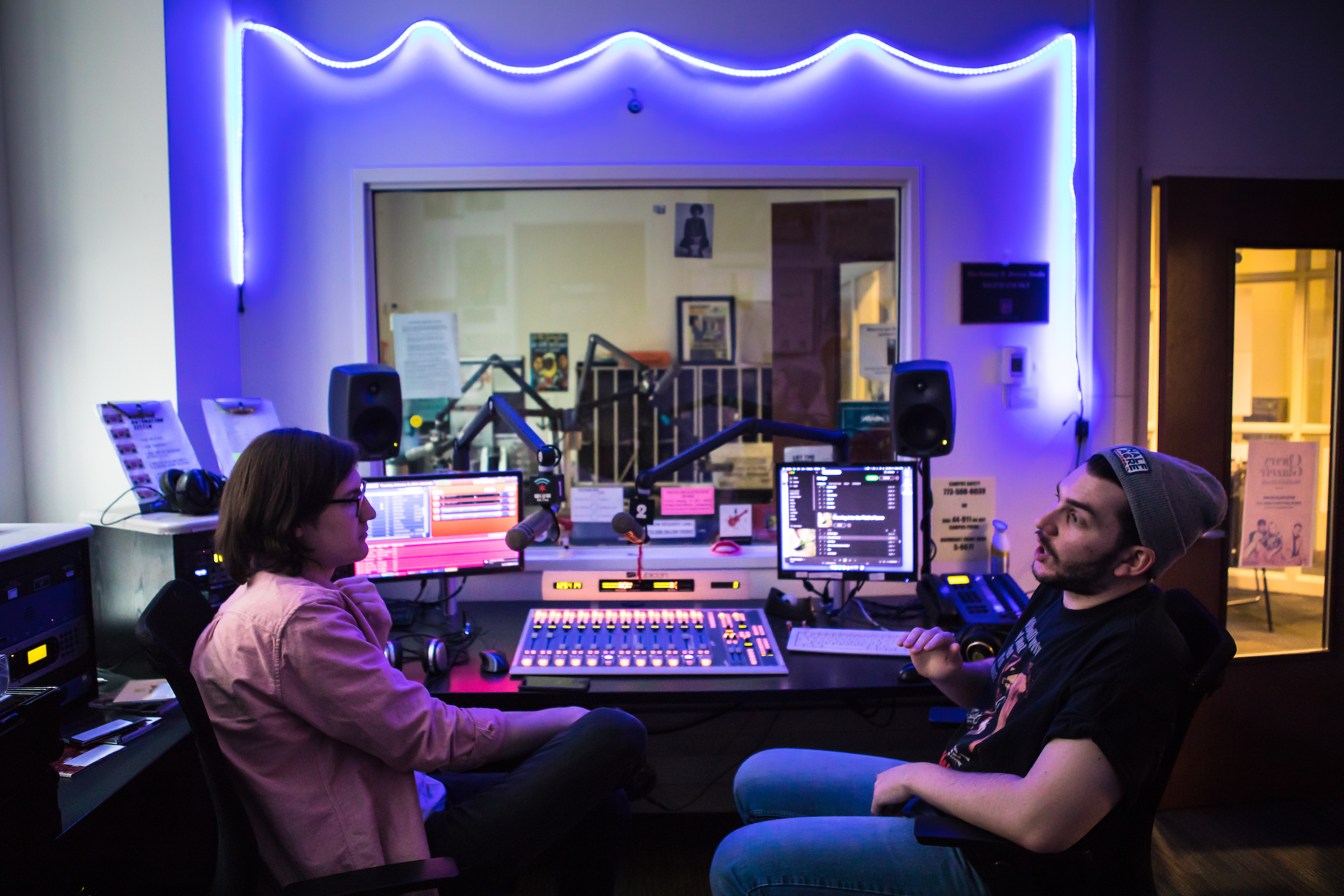 If you think you hear a familiar voice on WLUW 88.7 this February, your ears may not be fooling you.

This month, Loyola’s student-run radio station has invited alumni back to the airwaves for the WLUW Alumni Takeover.

Current Loyola students are donating their own air time to alumni who were DJs at the station from its inaugural year in 1979 to 2018 graduates.

Since many of the alumni are returning to the DJ booth after years or even decades away, students or executive board members help them navigate the newer technology and operations in the studio.

WLUW station manager Eleni Prillaman said the alumni have been really excited to return, and students have enjoyed getting to meet them.

“It’s nice to chat with the alumni and talk about what Loyola was like when they were students here,” said Carolyn Droke, student DJ and WLUW music director.

“This is the first time that we’ve done an alumni event like this and we thought this was perfect timing,” said WLUW station manager Eleni Prillaman.

WLUW offers Loyola students real world experience in radio. Loyola alumnus, Tom Hush said his time as a student DJ inspired his career path. Hush who graduated from Loyola with a broadcast journalism degree in May 2016, now works as a producer at WGN Radio.

“There was no way I could say no,” Hush said about receiving the email asking him to return to the station for the Alumni Takeover. “My experience at WLUW was a pivotal moment in starting my career,” he said.

Hush had been involved at WLUW from his freshman year to his senior year and said that stepping back into the DJ booth after a few years away was like “riding a bike.”

Hush said he enjoyed his time back and seeing the updates and improvements to the station.

“I’m so pleased with the direction that Eleni has taken with the students and with providing space for students to express themselves without judgement,” Hush said.

John Slania, Acting Dean of the School of Communications, himself was a DJ on WLUW during his time at Loyola. Slania began working at the radio station during its inaugural year, 1979 and was excited to return to the DJ booth for the Alumni Takeover.

Slania wrote, directed and acted in an original old-time radio drama under the title, WLUW Mystery Theater. He recently found a 40-year-old reel-to-reel tape of the show in his basement. SOC Technology Director Jamason Chen digitized the tape so it could be played on the air.

“It’s crazy to hear your voice from so many years ago,” Slania said.

Slania said that working at the station has been providing valuable experience for students over the past several decades.

“It really wasn’t a lot different back then,” Slania said.  “It wasn’t as sophisticated as it is now, but it was the same kind of idea that we dabbled in different areas to figure out what we want to do.”

Since the alumni served as DJs over such a wide-range of time, they have been encouraged to play music from the time they were on air. Prillaman said the alumni have been eager to learn the new equipment and curate their own playlists.

Prillaman said she hopes that the station can do something like this more often in the future.

“It has been really beneficial for the station and the alumni who get to come back and enjoy something that was really meaningful to them during their time at Loyola,” she said.

To tune in to the alumni takeover go to WLUW.org or 88.7FM until February. WLUW broadcasts worldwide 24 hours a day, seven days a week.