When people think of video games, academia is likely far from their thoughts. However, Digital Advertising Assistant Professor Seung-Chul Yoo has learned how to incorporate his own interests in gaming into his profession.

“To me, video games or virtual realities are a channel to deliver certain messages and are a communication platform,” said Yoo, who began teaching at Loyola last semester. “My main focus is on advertising, but video games are already interesting because I’m a video game player.”

Yoo specializes in digital advertising and is currently teaching New Media Campaigns (COMM 327) and Communication and New Media (COMM 200). In both of these classes, Yoo said he tries to incorporate some form of video gaming.

“I’m trying to [have] in-class video game sessions a couple of times during the semester and I’m also a fan of animation stuff, so I show some animations to my students,” he said. “Basically, I teach what I really enjoy.”

In addition, Yoo said he emphasizes theories as well as practical applications of these theories in his classes.

“We should know the process of how consumers process advertising information. However, [students] also need to know how to use newer platforms, like games, mobile apps and any of the newer technologies,” Yoo said. “This [semester], I’m putting more emphasis on practical application – how to use and how to train the audience’s behaviors.”

Guariglia said Yoo incorporated his experience in digital advertising and digital public relations into the classroom to help students learn the topics that were being discussed.

“He helped me gain a better understanding of media planning by giving us industry examples,” she said. “Right now, I’m interning for a media agency and I feel like I’m more prepared for it after taking Professor Yoo’s class.”

Coffman said she enjoyed teaching a class with Yoo because he has a good sense of humor and is broadminded.

“We got to have the pleasure of sharing the class to help him get used to teaching,” Coffman said. “With his background in digital advertising, I think the two of us have very different, complimentary backgrounds.”

Yoo added, “Co-teaching was a good experience. It provided me a good foundation so I could learn from a primary lecturer, who was Dr. Coffman.”

In fall 2013, Yoo will be teaching Principles of Advertising (COMM 211) and a new class on data mining, which was recently approved by Don Heider, dean of the School of Communication.

“We can collect millions of Twitter data from online spaces, but how you see the pattern behind it is a big question. We just assume the pattern,” Yoo said. “This class is going to be about how to patternize, visualize and create importance out of this phenomenon.”

In addition to teaching at Loyola, Yoo is currently working on several projects. 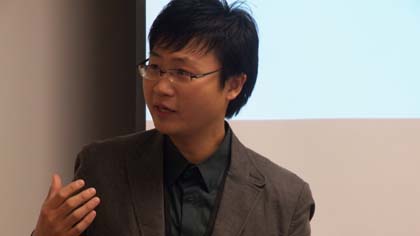 One of his ongoing projects uses interactive technology, such as video games, to help prevent people from smoking and to help people quit smoking. Yoo created a digital cigarette avatar to let players take their aggression out on it.

“In my video game, I let players shoot the avatar,” Yoo said. “That’s how they can have more aggressive feelings toward cigarettes.”

Yoo has also written academic articles related to this topic. In the articles, Yoo explains how to use virtual reality to persuade a consumer audience. He describes how to increase health activities through video games and how to increase human relations, such as negotiation and Internet communication, through a virtual environment.

In total, Yoo has published more than one hundred marketing and new media columns in a variety of industry magazines and has written academic articles, which have been published in journals such as the Journal of Advertising Research and Cyberpsychology, Behavior and Social Networking.

Along with these articles, Yoo spent a year writing his book, Digital Signage for Integrated Marketing Communication, which published in South Korea in 2011.

“The book is about how to use this digital new medium, which is the digital signage, for advertising and marketing purposes,” he said. “It’s about how to set up the effective hardware and software contents to reach more audience and to optimize and maximize advertising outcomes.”

Recently, Yoo also submitted a grant proposal to the National Institutes of Health (NIH) for his research on advertisements in violent video games.

“I was investigating to see how sponsorship of violent sports like UFC [Ultimate Fighting Championship] influence advertising information processing,” he said. “What I’m thinking is that putting a logo to violent sports, or sponsoring violent sports, is not a good choice for advertisers because it generates negative feelings toward the brand.”

Yoo explained that Budweiser is often called “Bloodweiser” because it is the main sponsor of the UFC games.

“Violent media or violent video games in general are really nice advertising venues for advertisers, because they think they can reach a larger audience … But putting advertising there is not a good choice,” he said. 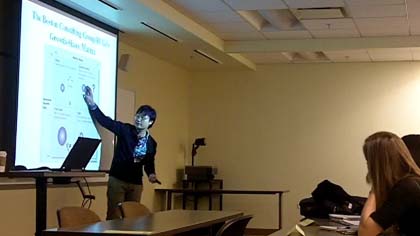 With the abundance of industry experience and knowledge that he brings to Loyola, Yoo said he hopes to contribute at least “a little bit” to the School of Communication.

“What I want to do at Loyola is to try to build up the digital advertising foundation,” he said. “And if it’s doable, I want to set up more industry collaboration with partners so students can have real world experience as well.”