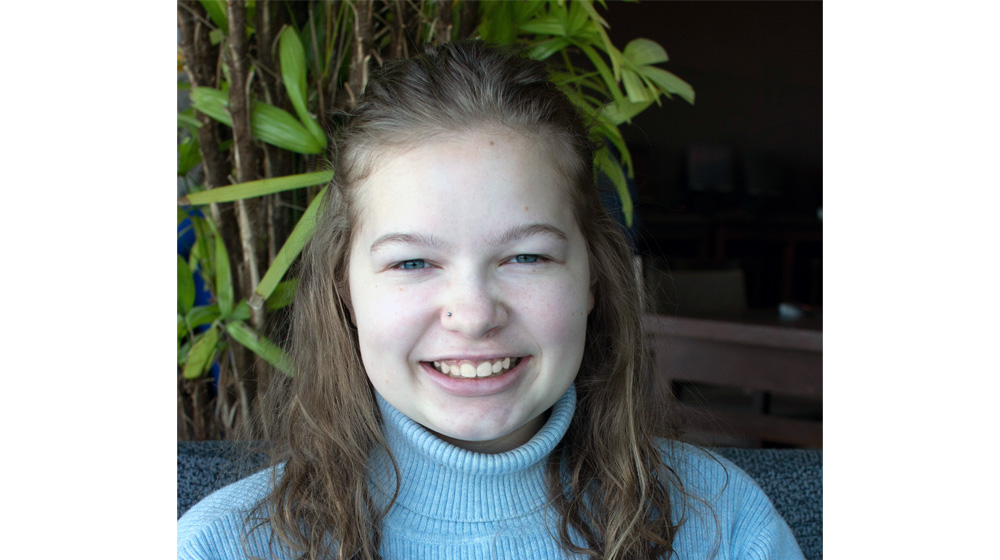 First and foremost: how are you doing?

I’m doing well, all things considered. If you had asked me in March or even in May, I would have a different answer for you. It’s been a rollercoaster of emotions, figuring out how to get back home, how to finish my junior year, and how to finish my internship.

I’ve done online classes in the past, and two of my spring classes were actually already online, so it wasn’t too big of a transition for me academically. I had great teachers that were able to adapt to what I needed. I had synchronous classes, and occasional asynchronous classes. But socially, it was very different. I saw my best friends every day and I lived with one of my best friends. And now I’m back home with my family for the first extended time since I went to college.

How were you able to finish your internship?

In the spring, I was interning with Marquee Sports Network of the Chicago Cubs. It’s new, it’s the Cubs’ own broadcasting network. I interned the entire spring semester, even working remotely after I went home this semester. I had a great time and I learned a lot, especially about production. And it gave me a lot of opportunities to branch out and chances to network.

Your Twitter page features the “S3: Sports Journalism in Self-Isolation” Webinar series, with different speakers all the way through the end of July. How did you come to create that?

It started as an idea in my head that I just wanted to make happen, and I got a couple friends involved who were willing to help. I had a really bad day in May, and I had a lot of negativity surrounding me. Instead of letting it get to me, instead of sitting here questioning everything in this current state of uncertainty, I decided to turn it into some positivity. I personally needed something to look forward to, and I wanted to give others something to look forward to, too. I thought it would be cool if professional sports journalists would be willing to give talks to students. I just started messaging people directly and asked if they would be willing to give a talk. I have a strong community of college sports journalists whom I’ve met through Twitter or through covering events. I messaged probably over fifty people. I got tons of responses, and 15 said that yes, they were available. I talked to SOC alumna Madeline Kenney as well as Tom Timmerman from the St. Louis Post-Dispatch.

What have the webinars focused on so far, and what kind of response have you gotten?

The speakers so far have given talks on topics such as interviewing, how to build relationships, women’s sports, and sexual harassment in sports journalism and how to handle it. I’ve had about 20 people in each speaker session. The end of Week 2 is tonight. People from all over the country have wanted to be involved. The amount of people who have reached out to me to ask to be put on my contact list has been just amazing.

I want to acknowledge the help and support I’ve had too. My friend Jon Barlas is a friend of mine from a different university, I met him while we were both covering a Loyola men’s basketball game. He’s been kind of my sounding board for everything. He helped me name it “S3”! The name is an acronym for “Schnable Speaker Series”—three S’s. It was initially something that I needed to get myself out of a rut, and it ended up being more than I ever could have imagined.

You mentioned people are participating from all over the country, too.

There are some from Washington, D.C., Houston, Florida, and Michigan as far as speakers. I’ve had a lot of sign-ups from students at Boston University and from California. It’s gotten bigger than just Chicago or the Midwest.

How have you been handling your position as Co-Sports Editor at the Loyola Phoenix?

I was struggling a lot because we were trying to put out so much for the readers all the time. It was definitely affecting my mental health. But I was able to work with my editors and they were very understanding. My co-editor now, we both have our days where we just don’t want to write, because we don’t have the motivation. We’re really good at hammering out those issues and keeping each other on track.

How were you able to keep writing pieces even in the absence of sports?

It was hard at first, because there were no sports! We didn’t know what we were supposed to write about. But we were still able to get out at least a story a week, so our editors were happy with that. We had to get really creative. Lately we’ve had a lot of breaking stories though. Since a week ago, we’ve written three stories. The recruiting window [for athletes] is open again. It was closed because of Covid-19, but the window is open now. There have been a handful of new men’s basketball commits, so we’ve written about that. I think things are going to look different, just like we’re seeing in professional sports.

What are your thoughts on the state of sports journalism during this pandemic?

I think the fact that sports journalists have been able to find stories even when there are literally no sports happening just shows how important and needed they really are. People say print journalism is dying, but everyone still has their favorite team. They will follow that team somehow, whether that’s through a favorite writer or announcer. We need people to tell those stories. I know that no matter what, there’s a need.

Is there anything that concerns you about the field right now?

The scary part is being a woman heading into sports journalism. Did you see that story in the Washington Post last week about sexual harassment? What happened with the Washington Reds isn’t rare, they just happened to get caught. But I have to look towards changes being made and how things are getting slowly better. I think having more women in leadership positions would help. There are so many women in this field, but so many of the editors are men. It’s too normalized for men to be in charge of sports sections in papers. It’s a hindrance on women, because even if it’s a completely unconscious bias, men still prefer to have men in positions of power. Even if you can’t put a woman in a leadership position, have extensive training for all staff, people of all genders on the spectrum need to be educated on this. The best way to knock out issues like that need to be educated, even if it’s uncomfortable.

How do you feel about sports journalism at Loyola?

In my experience, we don’t ever have more than two sports journalism classes offered at a time at Loyola. Most of my skills I’ve learned from reporting for the Phoenix. We don’t have the Association for Women in Sports Media or APSE (Associated Press Sports Editors). I know Mizzou has them, I have friends there who are in those groups. We don’t have them at Loyola, and those are exactly who sponsors professional talks like [the S3 Webinar Series] so their absence is partly why we don’t see this kind of thing happening at our school. So in that context, I think it’s really cool how many people from Loyola wanted to go to my event. There were so many people from Loyola that reached out to me who wanted to be included.

Do you have any senior year worries?

Not too many, honestly. I’m fortunate that I can still take my classes online. I hope that I get to walk in graduation in May 2021, but I also recognize that it may not be possible. I’m also an RA, so we’re supposed to get those placements soon. As long as there will be people on campus, I will be moving back to campus in the fall. I do think it will be better for me to be back in Chicago and get my head in the right space when the semester begins.

How do you feel about safety on campus, in terms of measures taken to prevent the spread of Covid-19?

As an RA, I’m in a different kind of position on campus. I fully believe that Loyola has done everything that they need to in order for us to be safe on campus. It may not really be possible to make things completely safe though. But I do think Loyola’s doing everything it can. I respect all the decisions they’ve made to be able to make us be healthy and safe on campus.

How has this pandemic affected you personally?

I am very conscious of everything going on, particularly because my younger brother is immunocompromised. We’ve been limiting exposure in our house since the very beginning. I’m very careful. If I go out in public, I definitely wear a mask. My parents and my older brother are all essential workers. I had to figure out how to get out of the house somewhat so I wouldn’t be so stressed being inside all the time, but I also had to be very careful because I already had three family members who had to leave the house on a regular basis anyway for work.

What do you plan to do with the S3 speaker series after it ends on July 31st?

I plan to turn all of the talks into podcasts so that people can listen to them after it ends. I’ve almost accidentally created a brand here. Never in my wildest dreams did I see this blowing up as big as it has. I maybe hold a one-off session, with just one speaker, at some point in the future. It could also be a series again with more speakers. It will always be free though! I want to eliminate boundaries to things. Some of us are able to pay for things like this, but many aren’t so privileged. People should be able to attend no matter what.

Any advice for students who are feeling down and want to do something like what you were able to create?

The best advice I have is to lean into the discomfort. The only thing that could get me out of my rut was getting up and doing things that meant something to me, so that’s why I created this series.
Interview by Genevieve Buthod. Edited and condensed for clarity.