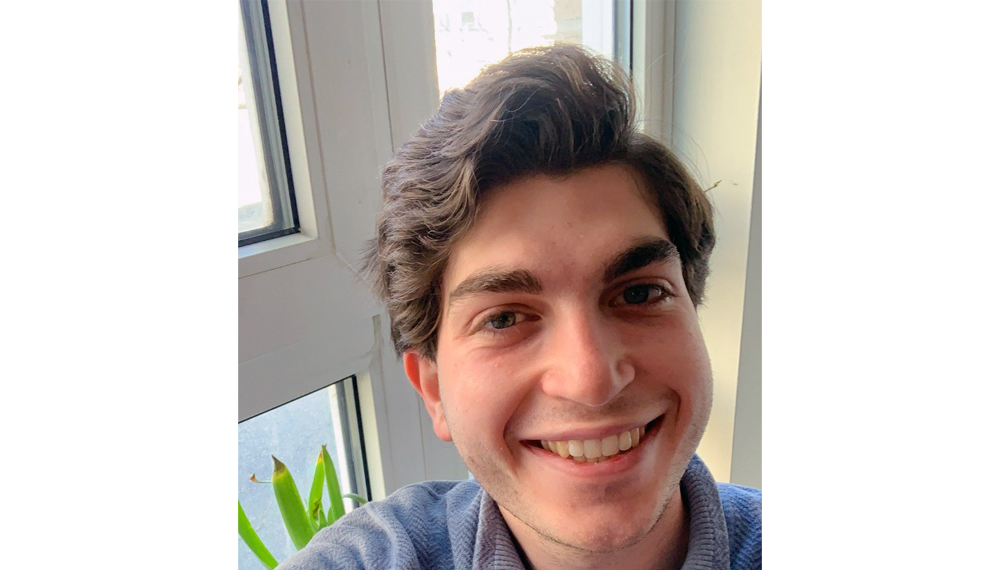 How are things in your neighborhood in Chicago?

I live in Rogers Park, very close to campus. We go on campus occasionally, to get out and go walking. My friend and I like to go by the lake, especially when the weather was good in the fall. We would bring a picnic blanket and do our homework by the lake, which was really nice. Just getting outside, breathing the air, I feel like I’ve accomplished more than I would otherwise.

How has it been maintaining your motivation with online learning?

I think it’s a bit of a struggle. I liked going to in-person classes. I like to get dressed and get ready for class, to leave the house. I don’t get to do that anymore. The biggest transition was forcing myself not to wake up three minutes before class, and jump into my chair. In March [2020] I felt like it was summer already, but I still had to stay in school mode. That was all I did. In fall, most of my classes were asynchronous, so I didn’t get the full Zoom experience. It was almost like I was taking a semester off, working on my own time, it was weird. But now all of my classes are synchronous. This is not the “new normal,” this is just normal now, and it’s weird. I try to not think about what we’re missing out on. I was never the student in person who would take notes on my laptop. If I’m taking notes, I’m taking them in my notebook. Now that I do have my laptop out, I’m reading my emails, checking the news. I feel guilty, but I’m just not engaged. It’s not that I’m not paying attention. When I was in Cuneo and the church bell would ring, it was definitely distracting. But we were all hearing it in class. Nowadays, if there’s construction on my street, I’m the only one hearing it, feeling that exact distraction.

I wouldn’t have taken classes this semester even if they had been offered in person, I wouldn’t have been comfortable. I definitely hope we’re in person in the fall. But honestly, I could see it going both ways. The American people have let me down time and time again. I can respect someone who sees taxes, for instance, in a different light than me. I don’t understand how people won’t wear a mask though. When you look at Australia, it’s clear that this could have been done better in our country. I don’t blame people for being skeptical of the vaccine, for not wanting to be a guinea pig. But that is what the trials were for. It’s up to people and the government to get it together. I heard we’re able to get enough vaccines by the end of the summer. So if enough people get the vaccine, if we all collectively do the bare minimum, then by the end of August, I should be able to get back on the shuttle to the School of Comm. Hopefully!

What are your plans for landing an internship before graduation?

I could shoot for the stars and apply for an internship at the Chicago Tribune. Maybe I could go home to Oklahoma and get an internship at The Daily Oklahoman. But I would really like for it to be in person. I don’t want it to be a Zoom internship where I’d still be stuck in my apartment, where I’d be getting a partial experience. I’m sick of that.

What drew you to journalism?

I think we’re living in a post-truth society. I write for the Phoenix, and I really feel like that paper is the School of Communication’s best bet for the future. Doing interviews for them was the best practice I’ve had in journalism. Some people speak in perfect quotations, but that’s not everyone! I think some people are just better at being asked questions, even on the spot. Maybe some journalists put people on the spot in interviews to try to get more out of them.

Oh my God, I have been ready to #FreeBritney since before it was cool! I have a lot of respect for Diane Sawyer, and her journalistic career, but I can’t get over how she conducted that interview. If I had the position to be able to do a tell-all interview with Britney Spears, I would never have conducted it like that…I’m not anti-media, but I do think they did treat Britney badly. It’s hard to see how people didn’t see it was wrong at the time. I wouldn’t say I was inspired to go into journalism because of it, but I would like to go into pop culture journalism. I’ve always written arts and entertainment stories.

What kind of entertainment stories have you done lately? Is that kind of story different than typical celebrity coverage?

I love reviews, in-depth feature stories. I did a story the other day about these brothers who started their own woodworking business. I like doing feature stories like that. But I would never want to be an E-News host, talking about who is or is not pregnant. In my high school, in my English class, we watched Britney Spears music videos and dissected them, we watched all of Beyoncé’s “Lemonade” and wrote research papers about it. We talked about ads from a gendered view, so we talked about magazines’ treatment of Jennifer Anniston. The audacity of her being single and content! That’s my little perspective of not wanting to be like US Weekly. I wouldn’t want to go into that journalism. I wouldn’t take a paycheck to write stories like that. Nor would I take a paycheck to write for Fox News, but you know.

What made you choose your Arabic minor?

I’m taking it because my family is Lebanese, so I have an actual reason to want to learn it. My dad grew up in Lebanon. Every summer (except 2020 obviously) we would go to Lebanon and stay with our family there. I don’t intend on being a political correspondent in Saudi Arabia or anything like that. My mom’s cousin did that, and he won multiple Pulitzer Prizes, but he was also kidnapped in Libya once, and he died on the front lines. So it’s really just a personal thing for me. It’s not something I want to pursue in journalism.

Over the last year, I feel like I’ve learned a lot about who I am. When you’re stripped of all the distractions, when it’s quiet, you’re forced to reckon with who you really are. As far as society coming together, people really showed their true colors. As some people put their masks on [literally] others took theirs off [figuratively]. It’s going to be hard for me to forget who threw huge parties and went on vacations this past year, once this is all over. But I honestly feel like most people at Loyola really kept it together. How people acted on campus really impressed me this year. Compared to other colleges, I think Loyola students actually did a really good job.

Interview by Genevieve Buthod. Edited and condensed for clarity.