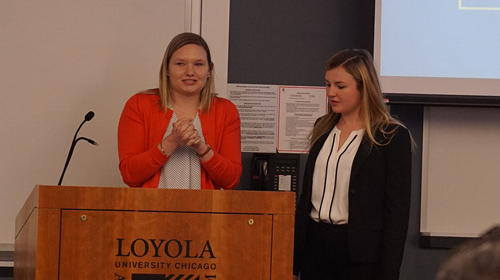 Quinlan team begins their presentation with a clearly defined goal

This past spring, Quinlan hosted its first ever Supply Chain Data Analytics competition. Participating students had the opportunity to work with and analyze a large-scale data set from Reyes Holdings, a Chicago-based holding company for multiple large food and beverage distribution companies. The data analyzed came from statistics that are regularly collected by Reyes via on-board devices in an ongoing effort to understand when and why road accidents occur. By taking part in this event, the students had a hand in ensuring the health and safety of Reyes’ fleet of drivers as they drive over 300 million miles a year. The competition was organized by Dr. Mike Hewitt, Associate Professor of Supply Chain Management at Quinlan School of Business (QSB), in close collaboration with Annelies Van Thillo and Paul Rizzo at Reyes Holdings. 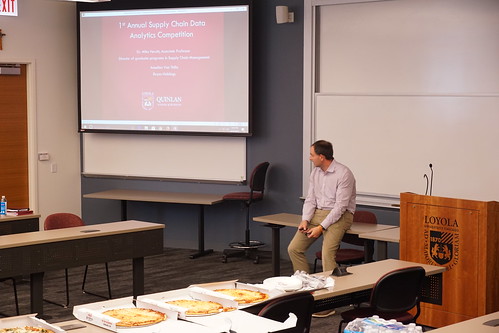 The competition was open to all schools in the Chicagoland area; eight teams submitted presentations and reports for consideration for the final round, where $1,500 in prize money was awarded. There was one submission from Illinois Institute of Technology (IIT), one from Northwestern University (NU), four submissions from Quinlan School of Business, and two from the University of Illinois at Chicago (UIC). Those eight submissions were evaluated by both academic and industry experts, including Dr. Hewitt and Ms. Van Thillo. From the eight submissions, the finalists were:

Those three teams then presented to a panel of six supply chain professionals who determined the final ranking of teams. This ranking was based on the rigor of the analysis performed by the team and how well the team communicated the managerial relevance of that analysis to Reyes. The team from Quinlan tied for first place with the team from NU, with the team from IIT coming in a close second.

This competition would not have been possible without the support of Quinlan’s Supply and Value Chain Center, specifically Harry Haney and John Caltagirone. The success of the competition is due in large part to the close collaboration with Reyes Holdings, specifically Annelies Van Thillo and Paul Rizzo.

Dr. Hewitt intends to make this competition an annual event, with the goal to regularly give students the opportunity to engage in a real-world data analytics exercise. He welcomes participation from SVCC members in future competitions, either as panel judges, or sources of data sets/problems, or both. If you are interested in participating, please reach out to either Harry Haney (hhaney@luc.edu) or Mike Hewitt (mhewitt3@luc.edu).