For this alum, it’s all about making an eco-friendly impact 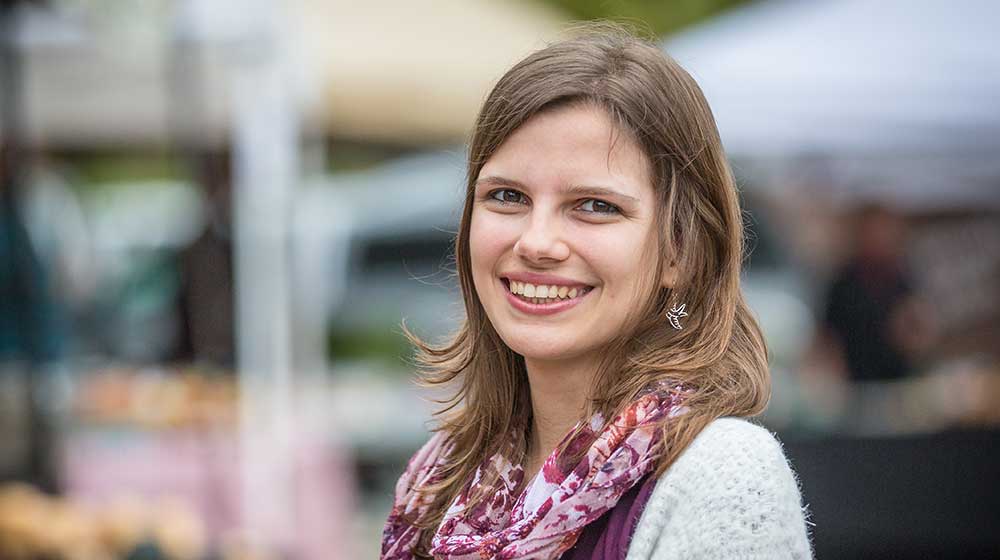 “The ability to take a project and run with it was huge,” says Loyola alum Kelsey Horton, who helped start the Loyola Farmers Market when she was a student at the University. “And I think that’s something I really got from the sustainability program.” (Photo: Natalie Battaglia)

For someone who didn’t plan on studying environmental science, Loyola alum Kelsey Horton has left her mark on the local green community.

Horton, who graduated in 2012 and now works at the Chicago-based Midwest Energy Efficiency Alliance (MEEA), was struggling to pick a major a few years ago when she signed up to live in Loyola’s Green Learning Community. There she met Gina Lettiere, a sustainability specialist at the School of Environmental Sustainability who was co-teaching the UNIV 102 seminar.

Working with Lettiere, Horton became a key part of Loyola’s recycling program, doing outreach to different University departments. The two teamed up again in a Solutions to Environmental Problems (STEP) class, in which students looked into starting a farmers market on campus and Lettiere served as a mentor.

As simple as the project sounded, there were plenty of questions to answer.

“It was a very new idea,” Horton said. “Where would we do it? Who would have to be involved? Do students even want it? What do farmers want out of a farmers market? I had no idea what I was doing. I was 19 years old.”

Horton made it through the semester, but after all that work, she found that she didn’t want to let the project go. The proposal continued to move forward until June 2011, when the Loyola Farmers Market opened on a gravel lot off Sheridan Road. Lettiere managed the operation and Horton served as assistant manager.

“I remember Gina and I had been working together to plan this for a very long time,” Horton said. “The very first day before it opened, a truck drove up from Michigan with our fruit farmer, and I just remember thinking, ‘This is real. Now there are higher stakes involved because there are people here who are trying to make a living.’ ”

The market proved so successful that it has since moved to the Loyola Plaza—a larger site just steps away from the Loyola Red Line stop—and it now features nearly a dozen vendors. (Learn more, including days and hours of operation, at the Loyola Farmers Market website.)

For Horton, working on the project was an invaluable experience.

“The ability to take a project and run with it was huge, and I think that’s something I really got from the sustainability program,” Horton said. “The opportunities are there for students who are willing to show up, volunteer, and try for internships and jobs.

“I was very grateful that I had the chance. I mean, I took a class about food systems when I was 19, and somehow two years later, I was bossing around farmers.”

After she graduated in 2012—and after she spent a week with other students helping a rural community build a greenhouse in Panama—Horton landed at MEEA, where she matches homeowners with energy efficiency rebates and with local businesses to make the home upgrades.

She attributes her work at Loyola to getting her current position. Besides having experience in real-life settings at the farmers market and the recycling program, Horton believes Loyola gave her another edge.

“I learned at Loyola that change can be slow, but it’s worth it,” Horton said. “I knew I wanted a job afterwards that was like one of those two jobs, which was not on a protest line and pointing fingers at the bad guys.

“I wanted something where I could pull people together and make an actual difference. At the farmers market we did that, at the recycling program we did that.”