The Mayors Are Still In 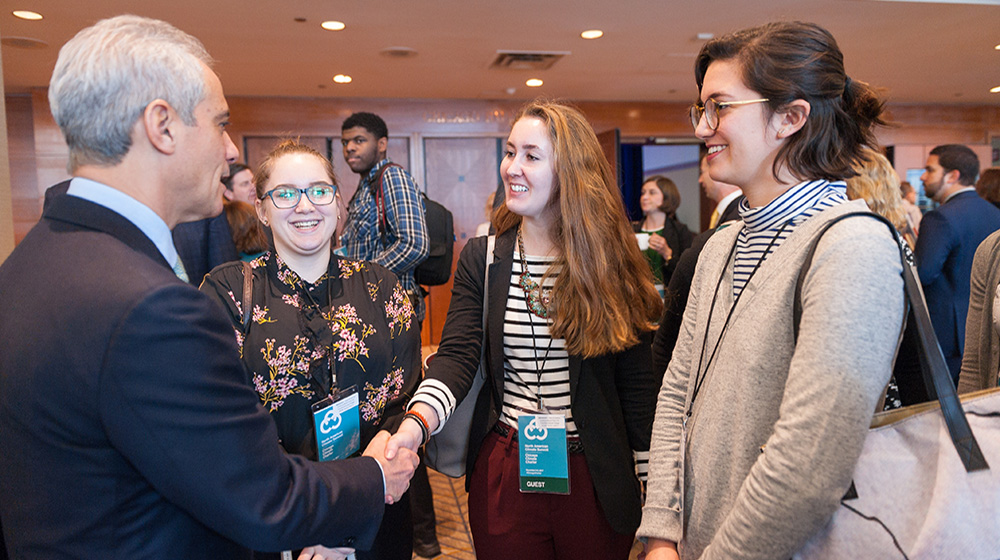 Loyola Students talk with Mayor Emanuel at the North American Climate Summit on December 5, 2017. Photo Courtesy of the City of Chicago.

More than 50 mayors from the U.S. and abroad gathered in Chicago in early December to discuss tactics to reduce greenhouse gas emissions during the North American Climate Summit. These mayors signed the Chicago Climate Charter, committing their cities to reduce carbon emissions in line with the Paris Agreement; report and track their city’s emissions; and advocate for greater local authority to empower cities to take more aggressive climate action. The mayors carried the message that local solutions can create a global impact when it comes to policy addressing climate change.

Students, faculty, and staff from Loyola’s School of Environmental Sustainability attended the Summit and various supporting events including a community forum at the Field Museum and a smart cities event at UI Labs. SES students were curious to see what these local commitments to the Paris Agreement might look like. “As an Environmental Policy major one of the best takeaways for me is that we need to face environmental problems and transitions at the appropriate scale if we want to make a difference,” says senior Sienna Fitzpatrick. Fitzpatrick felt that the Mayor’s Summit gave her a platform to understand the scope of policy work that is occurring both locally and internationally.

Sophomore David Lopez had another take. “These leaders have inspired me to continue my efforts to become a leader in the sustainability movement."  Other students like Lucy Anderson spoke personally with some of the elected officials. One memorable exchange for her was with Mayor Kirk Caldwell of Honolulu. “He stressed to me that we are all in this together. We must move forward in any way our cities can.”

President Barack Obama made a surprise appearance and applauded the efforts of local public officials to reduce greenhouse gas emissions. Obama emphasized how mayors are truly boots-on-the-ground public servants. “I’m here to say thank you to all of the mayors, whose positions require you to actually work and not just talk.” At the end of the Summit, Chicago Mayor Rahm Emanuel stressed the need for events like these to create long-lasting positive impacts not just on the local level, but also on a worldwide scale.

Sophomore Gavin Chisholm summed up the feelings of his fellow students. “It's inspiring to see leaders from around the country commit to the climate challenge despite the complacency at the federal level. It gives me hope.”