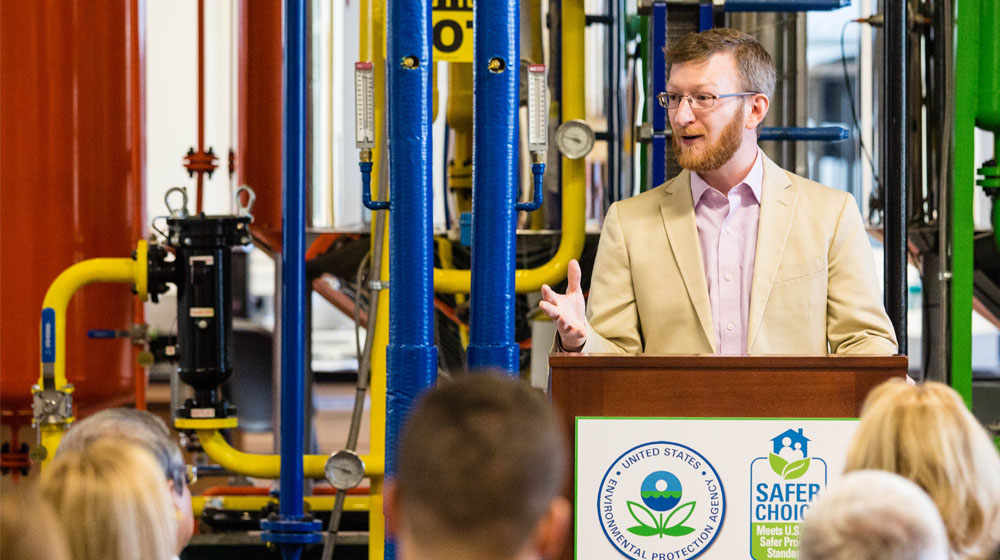 What could bring together business leaders, government officials, students, and Loyola faculty all at the University’s Searle Biodiesel Lab?

Easy: a new chemical, a couple cleaning products, some hand soap, and a trade association. Or to put it more generally, products being made safer for families, pets, communities, and yes, the environment.

On July 21, the School of Environmental Sustainability’s Searle Biodiesel Lab was honored along with four other Chicagoland organizations by the Environmental Protection Agency. The five were among 21 recognized nationwide with the 2015 Safer Choice Partner of the Year Award.

“We have more Partners of the Year for Safer Choice products [in the Chicago area] than anywhere else in the country,” said Susan Hedman, the EPA’s Region 5 Administrator, while waiting for presentation to begin. “I hope that people take away from this event that there are products out there that are good for the environment—and they’re also good for business.”

The EPA’s program highlights companies and organizations using safer, non-toxic chemical ingredients in cleaning and other products. Loyola was singled out for its BioSoap, which is made with glycerin, one of the byproducts of the lab’s biodiesel fuel production. The liquid soap, which began as a small-scale test, has grown to be the supplier of suds for the entire Lake Shore Campus.

The event featured speakers from each awarded business and organization, including Zach Waickman, the Searle Biodiesel Lab manager, who also led a tour through the facilities, fielding questions on the benefits of biodiesel fuel and the quality of Loyola’s waste vegetable oil supplies.

“This is a really cool thing for the students to see this whole arc that we’ve gone through,” said Waickman. “Around 2007, we started making the first attempts at a soap, and the idea was always to utilize this waste product that we were creating through biodiesel production and use it in campus restrooms. Little did we know what we were taking on.”

The first challenge? Producing enough soap. This past year the Lake Shore Campus used more than 1,000 gallons of hand soap.

Yet even after moving to larger facilities, Waickman came across another hurdle. When the lab found itself ready to take over the Lake Shore Campus’s restrooms, Loyola’s contractors reminded him of a requirement the University asked to be put in their new contract—one that said only green-certified products would be used on campus.

That precondition led the lab to getting involved with the EPA’s Safer Choice program.

“We’re one of the few groups that likes external oversight,” Waickman said. “We want that validation that this small scrappy student-run process with these waste products is making a really innovative, environmentally friendly, effective product. So when we became partners in the Safer Choice program, it was really cool because we got it into the restrooms.”

For the future, Waickman hopes the lab will be able to expand to Loyola’s Water Tower Campus as well as to Northwestern University, which already uses its biodiesel fuel for its buses. In the meantime, a team of students is finishing up a reformulation process to continue improving the soap.

But don’t expect Waickman to add any unnecessary chemicals—though he fields plenty of questions on why the soap doesn’t look or suds up like others do.

“What we’re doing is a great example of moving into the next phase of environmentally sustainable business, which is moving from these extractive technologies and crazy amounts of chemicals to these really effective, natural products that have minimal or zero impact on the environment.”

Click here to see more photos of the event.