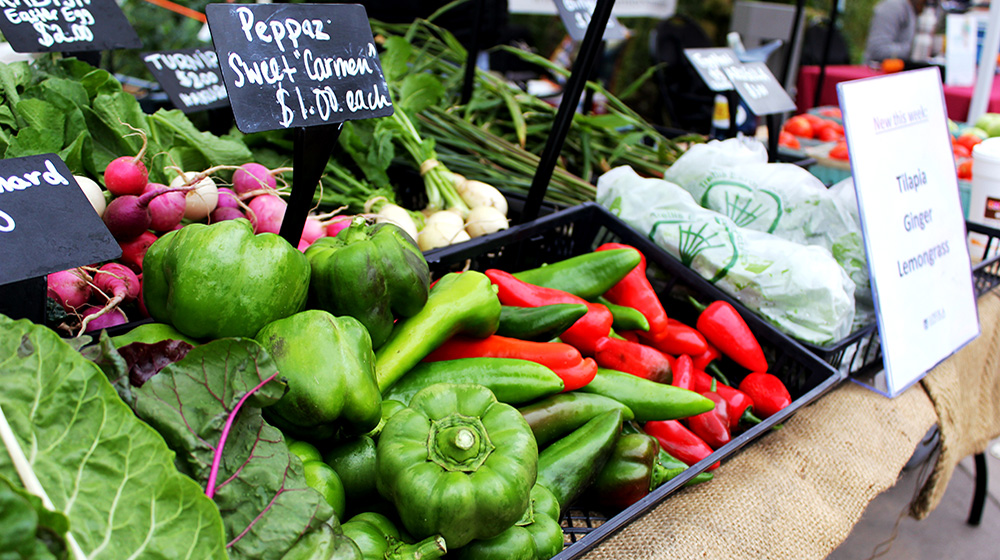 It’s Monday night and I’m preparing a meal. This seems an average event if you don’t know me, but I do not cook. Ever. My day-to-day is filled with fast food and to-go cups. It’s not something to be proud of, but with a busy schedule and poor time management skills, cooking rarely feels like an option. My current culinary endeavors are the result of a STEP assignment, undertaken with some of my classmates, to create a ‘sustainable meal.’ Seemingly simple, this exercise pushed me to become more critical of my lifestyle surrounding food. I’m removed from every part of the food production process, from growing, to transport, to stocking shelves. This disconnection makes knowing how to build a sustainable meal difficult. As I begin to cook, for the first time I reflect on a central question: what are the consequences of being removed from the food production system?

My group’s prior grocery trip provided some fodder for consideration. As we pondered which grocery store to walk to, I began wondering where my dollar goes when I buy food. This is a valid concern considering the realities of our national food system. Farmers often lose out, as only 16 cents of every dollar used to buy food returns to the farm. This is a stark drop from the past when, in 1975, 40 cents on the dollar went back to farmers. [i] Labor also is often undervalued and workers underpaid. Many entities can get away with exploitive practices because 53% of agricultural laborers are not authorized to work in the U.S. [ii]  Since my food system isn’t local, tracking dollars becomes quite the hunt. In this dispersed system with the consumer removed from the food source, it’s difficult to know whom my purchasing power benefits.

I myself have never grown food, which results in little understanding of the effort, resources and technology needed to feed a population. An area rife with lack of knowledge is the debate on genetically modified organisms, or GMO’s. The debate itself is warranted, especially since up to 70% of processed foods in the U.S. contain an ingredient from a genetically modified plant [iii], but fears can be rooted in misinformation. After listening to ecologist Chris Peterson’s lecture, I have the sense that the danger is not the technology itself, but rather how it is used. For instance, GMO’s infused with pest resistant genes can create more resilient pest populations. Under careful planning, however, GMO’s can be beneficial. For example, researchers inserted a wild potato gene into a commonly produced potato breed to protect it from blight. Since the wild potato had been immune to the blight, these newly bred potatoes were as well, illustrating how GMO technology can sometimes be beneficial. [iv] Fear of this technology is not completely unwarranted, but wholesale opposition may arise from misunderstanding of food production.

The most significant negative impact of my distance from food production is my inability to see how the food system affects others. As sociologist Marilyn Krogh put it, issues of hunger and labor exploitation feel abstract to many who have not witnessed them. Speaking about the global hunger crisis, Krogh explained that subsidized crops from the U.S. are sold in developing countries, and because of the artificially low prices, local farmers cannot compete.[v] This practice becomes even more problematic when one considers that three-quarters of the world’s hungry live in the rural areas of developing countries and are commonly, that’s right, farmers. [vi] From labor issues in our borders to hunger issues abroad, wrapping my mind around the food system’s complexity feels impossible. We have a global food system, and unless I'm shopping at my local farmers’ market, I’ll never meet the people who work and overwork to pick the food I eat. I’ll never see the hunger of farmers abroad. I can look at my finished dish and have little concept of the work and resources it took to get each ingredient to my table.

All this abstraction has left me in the dark and ultimately uncaring about the impacts of our broken food system – until now. It’s evident that the economic, environmental and human impact of my consumption choices are immense. The way each of us decides to combat these structures is our own choice, influenced in part by external factors like budget and access to information. Whether fought by deviations in consumption choices or more radical efforts, these issues cannot be ignored. Being conscious and reflective is the first step.