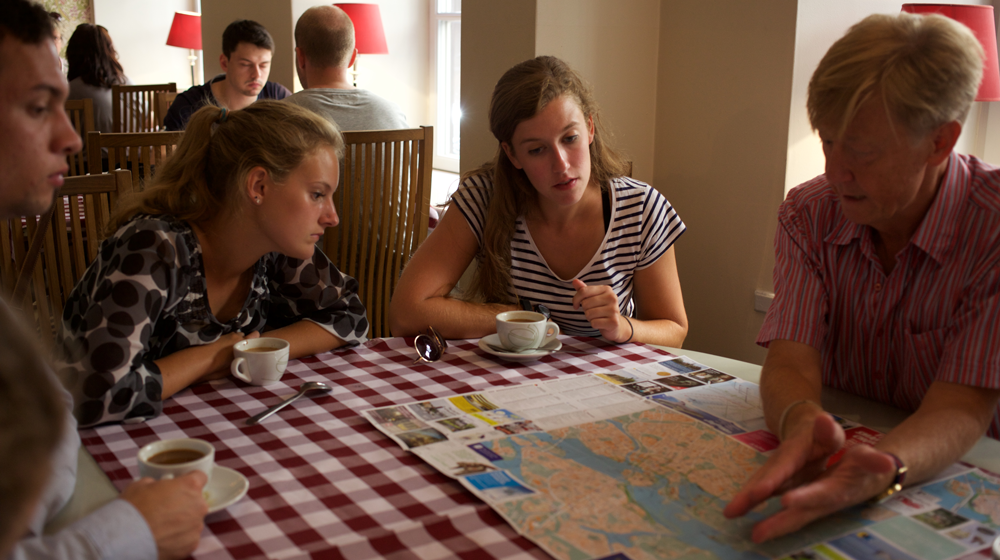 Andreas Carlgren with students Olivia Urbanski and Kelsey Czajkowski from the first IES (now SES) Cohort to study abroad in Sweden at the Newman Institute.

Environmental Studies and International Studies double-major Olivia Urbanski knew she was in her dream class when her instructor Skyped in guest lecturers from the United Nations Conference on Climate Change (UNCCC) also known as COP21 in early December. "We were talking to people in Paris telling us how the negotiations were going as they were happening." The result of the COP21 negotiations was a climate accord where 195 nations agreed to lower greenhouse gas emissions and keep the planetary temperature in check to lessen the effects of climate change. "None of us expected the negotiations to include limiting the temperature rise to 1.5 degrees Celsius,” added Urbanski. “This class got me excited about climate change negotiations and what's next for the world."

Of course, this wasn't a typical class with a typical instructor. Urbanski and four other SES students were part of the first cohort of Loyola students to study abroad at the Newman Institute in Uppsala, Sweden this past fall—Sweden’s first and only Jesuit institution.  Her instructor was Andreas Carlgren, former Swedish minister for the environment from 2006-2011.  Carlgren, a key negotiator in various environmental negotiations on behalf of Sweden and the European Union, taught two other courses during the semester including Swedish Environmental Policy and Praxis and Human and Social Development within Planetary Boundaries.  All proved powerful and informative for the SES students, especially since it was coupled with field trips that included hikes, camping, Swedish forestry work, and kayaking during class lectures.

The Newman Institute's courses are designed to complete major coursework for SES students (with nine environmental studies/science credit hours) as well as required University core courses. This program is unique to Loyola University Chicago and was created through a collaboration between SES and the Newman Institute. "Our aim is to give our students a theoretical basis of Swedish environmental policy in the classroom and then let them go out in the field to learn firsthand from practitioners,” said Newman Institute Program Coordinator Malin Ahrlin. Through the program, students visited a Swedish recycling facility, a water treatment plant, the Stockholm Environment Institute, and the Stockholm Resilience Center--the Swedish think tank where the theory of Planetary Boundaries was developed in 2009. Spare time and a deep connection to the environment were valuable lessons learned for the American transplants. Classes with Carlgren were conducted one at a time, so students spent their first weeks on one course and then moved onto another course. "The Swedish lifestyle is so much more relaxed. They have Fika twice a day, which is a coffee break. But it's not just any coffee break, it's really about taking the time to connect with coworkers and other students. It's about the connections." said Urbanski.

One thing that struck Urbanski and her cohort while in Sweden was how ingrained and transparent the environmental practices were there. "There's a ton more recycling and sorting. Composting is huge. From a young age, they just learn to sort everything.  When I was grocery shopping, a majority of the products were ekologisk, which means organic. So you don't have to choose whether you want to spend the money and be environmentally friendly or get the cheap stuff that's not. It's easy to make the right choice."

The second cohort of Loyola students will leave for Sweden in the fall of 2016. The Newman Institute Study Abroad Program is an opportunity for all Loyola students to travel to Sweden.  "We want to give Loyola students a chance to be inspired by people living in one of the most sustainable countries on the planet. The Swedish people have made the commitment to live within the limits of their natural resources. This is the way we should all live," said SES Founding Director Nancy Tuchman.

For more information about the Newman Institute, visit here.

To read an in-depth interview that SES conducted with Andreas Carlgren, former Swedish minister for the environment, visit LUC.edu/sustainability/stories/archive/carlgrenqa.shtml.