Where Have All The Heavens Gone? 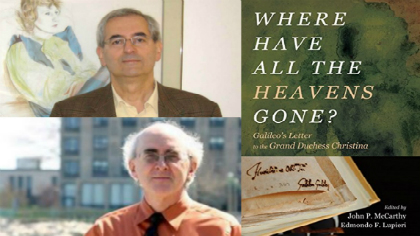 2015 marked the 400th anniversary of the writing of a very important letter in the history of western thought, the letter of Galileo Galilei to Christina of Lorraine, the Grand Duchess of Tuscany.  The letter remains a classic for thinking about how a traditional religion can enter a modern world.  Recognizing this, Profs. John McCarthy and Edmondo Lupieri realized the opportunity for involving several departments in a commemorative event that could also attract an international audience.  After discussions with Dr. Sarah Gabel and Fr. Charles Jurgensmeyer, S.J., of the Fine and Performing Arts Department, and Dr. Asim Gangopadhyaya of the Physics Department, Profs. McCarthy and Lupieri planned an extensive series of interdisciplinary events at Loyola titled: “Celebrating Galileo – Celebrazioni Galileiane”.  Thanks to the financial support Loyola and of several external institutions, the result was a year-long set of public programs and now the publication of a scholarly monograph published by Cascade Books titled, Where Have All the Heavens Gone? Galileo’s Letter to the Grand Duchess Christina (June, 2017).

The events included the following:

This entire program was sponsored by several offices and departments of Loyola University (the President’s Office, the Provost’s Office, the Office of the Dean of the College of Arts and Sciences, the Office of the Dean of the Graduate School, the Fine and Performing Arts Department, the Physics Department, the Theology Department, the John Cardinal Cody Chair in Theology) as well as by the Italian Consulate General, the Italian Cultural Institute and ItalCultura of Chicago, the Kindekins Foundation through the Catholic University of Louvain-la-Neuve, and had the patronage from the Pontifical Council for Culture and the Science and Faith - STOQ Foundation of the Vatican.