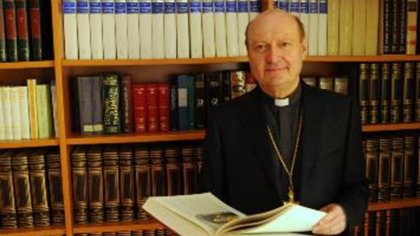 On March 25th, Loyola University Chicago will confer upon His Eminence Cardinal Gianfranco Ravasi an honorary doctoral degree. Cardinal Ravasi is the President of the Pontifical Council for Culture and the Pontifical Commission for Sacred Archeology. An expert in biblical languages, he served as Prefect of the Biblioteca-Pinacoteca Ambrosiana in Milan and taught Old Testament Exegesis at the Theological Faculty of Northern Italy.

Cardinal Ravasi is widely recognized as one of the leading intellectuals of the Roman Curia and has published over 150 volumes, mainly on biblical topics. As part of his conferral celebration, Ravasi will offer a lecture entitled "American Culture, Catholic Higher Education, and their Contributions to the Global Church."

The degree conferral, and lecture by Cardinal Ravasi, will coincide with the installation of Dr. Miguel H. Díaz as Loyola University Chicago's John Courtney Murray Chair in Public Service.