THE QUESTION OF RELIGIOUS FREEDOM: FROM JOHN COURTNEY MURRAY, S.J. AND VATICAN II TO THE PRESENT 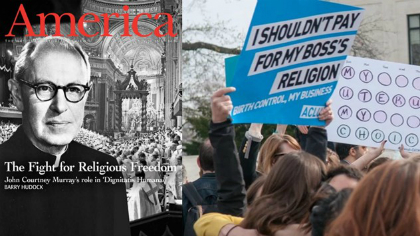 THE QUESTION OF RELIGIOUS FREEDOM: FROM JOHN COURTNEY MURRAY, S.J. AND VATICAN II TO THE PRESENT
Sponsored by the John Courtney Murray University Chair in Public Service, the Richard A. McCormick, S.J. Chair in Catholic Moral Theology, and Loyola University Chicago’s Department of Theology

On March 12th and 13th, Loyola University Chicago will bring together leading theologians and legal scholars from around the country for a two-day conference on the subject of religious freedom.

In recent times, religious freedom has reemerged as a key and controversial issue within the United States and around the world.  With a desire to contribute to this essential conversation, we have invited prominent scholars to discuss and analyze religious freedom as it relates to issues of social polarization, peaceful coexistence, non-discrimination and the common good. We also will look back to the contribution of John Courtney Murray, S.J. to Dignitatis Humanae, the groundbreaking document on Religious Freedom issued in 1965 by the Second Vatican Council.

Kathleen A. Brady is a Senior Fellow at the Center for the Study of Law and Religion at Emory University and has held faculty appointments at Villanova University and University of Richmond School of Law. Her scholarship focuses on the intersection of law and religion, including the First Amendment religion clauses, religion in public life, law and theology, and Catholic social thought. She is the author of The Distinctiveness of Religion in American Law: Rethinking Religion Clause Jurisprudence, published by Cambridge University Press in 2015 as part of the Center’s Law and Christianity book series. Her book was recognized with a second place award in the Faithful Citizenship/Religious Freedom category of the 2016 Catholic Press Association Book Awards. Her publications have also appeared in numerous law reviews. She holds a Bachelor of Arts from Yale College, a Master of Arts in Religion from Yale Divinity School, and a Juris Doctor from Yale Law School.

Thomas Berg is James L. Oberstar Professor of Law and Public Policy, University of St. Thomas (Minnesota) and among the nation’s leading scholars of law and religion. He has written approximately 50 book chapters and journal articles and dozens of op-eds and shorter pieces on religious freedom, constitutional law, and the role of religion in law, politics and society. The U.S. Supreme Court and federal courts of appeals have cited his work several times. He is the author of several books, including a leading casebook, Religion and the Constitution (with Michael McConnell and John Garvey, Aspen Law Books), and The State and Religion in a Nutshell (West). He has also written more than 50 briefs in First Amendment cases in the U.S. Supreme Court and lower courts, and he founded and directs St. Thomas's Religious Liberty Appellate Clinic. His other chief scholarly interest is in the relation of intellectual property rights, social justice, and human development. He received a B.S. in journalism from Northwestern University, an M.A. in philosophy and politics from Oxford University, and both an M.A. in religious studies and a J.D. from the University of Chicago. He was a Rhodes Scholar at Oxford.

Leslie C. Griffin is the William S. Boyd Professor of Law at the University of Nevada, Las Vegas, William S. Boyd School of Law. Professor Griffin, who teaches constitutional law, is known for her interdisciplinary work in law and religion. She holds a Ph.D. in Religious Studies from Yale University and a J.D. from Stanford Law School. She is author of the Foundation Press casebooks, Law and Religion: Cases and Materials (4th edition, 2017) and Practicing Bioethics Law (2015), which was co-authored with Joan H. Krause, Dan K. Moore Distinguished Professor of Law at the University of North Carolina School of Law. She has also written numerous briefs defending employees’ religious freedom.

Barry Hudock is the author of several books, including Struggle, Condemnation, Vindication: John Courtney Murray’s Journey toward Vatican II. His articles have appeared in America, Commonweal, Our Sunday Visitor, U.S. Catholic, and elsewhere. He received his STL in sacramental theology from the Catholic University of America. He works as a publisher at Liturgical Press and lives with his family in central Minnesota.

Robin Lovin is Scholar-in-Residence at Loyola University Chicago and Cary Maguire University Professor of Ethics emeritus at Southern Methodist University.  A resident scholar at the Center for Theological Inquiry from 2012 – 2017, he became a member of the SMU faculty in 1994, and served as Dean of SMU’s Perkins School of Theology from 1994-2002. Dr. Lovin’s most recent books are Christian Realism and the New Realities (2008) and An Introduction to Christian Ethics (2011). He has also written extensively on religion and law and comparative religious ethics. He is a former Guggenheim Fellow, former president of the Society of Christian Ethics, and a member of the advisory board for the McDonald Centre for Theology, Ethics, and Public Life at Oxford University.