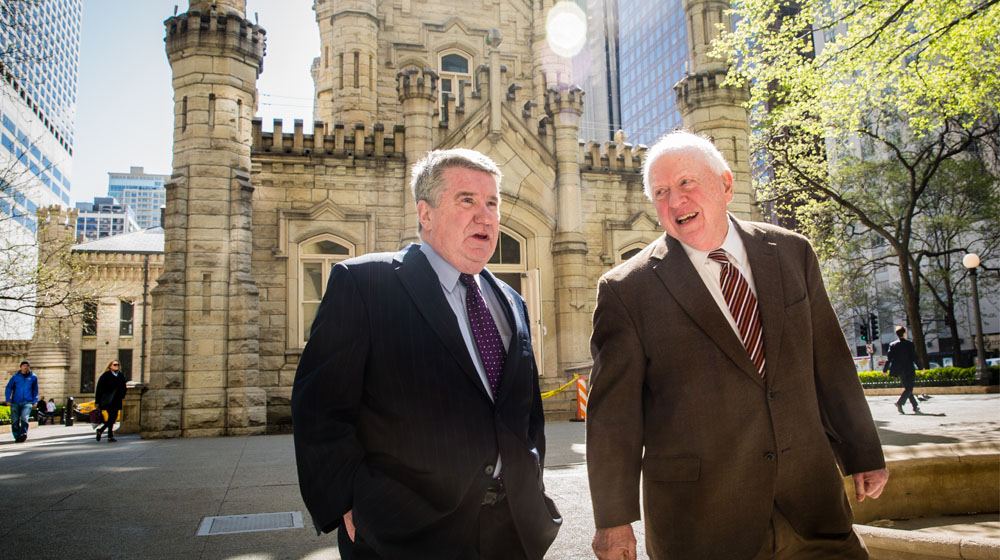 Marty Lane (BS ’65) and Bob Ward (BS ’65) both worked at Loyola University Chicago, were classmates in college, and are celebrating their 50th reunion this year. In the interview below, they reflect on their time at Loyola as students, staff members, and alumni.

Tell us about yourselves, where you’re from, and how you came to be at Loyola.

Marty: I’m from Chicago, from St. Gertrude Parish, at Granville and Broadway. My major was political science, which I loved. I grew up in a political family—my father was a Democratic Org committee member under the first Mayor Daley. I was on the Lake Shore Campus, and Bob was at the Water Tower Campus, so I really didn’t know him in college.

Bob: I grew up on the South Side of Chicago around 79th and Halsted. I was also a political science major, and my family was politically active. When I first came to Loyola, it took me a while to find myself. But as time went on, I got active in a few things, my grades improved, and I met my wife, Jean, in the Marquette Center in my last semester. We call that “just in the nick of time.”

You two didn’t have classes together?

Bob: One that we know of—Western European Governments.

What did you do after graduation?

Marty: I went through Army ROTC, so I had an obligation of two years. I was a lieutenant, so I spent a year in the Vietnam War from 1967 to 1968. I was very lucky and blessed with that experience, where God was good to me and saved me. Two out of my class of 20 were killed. I came back and thought of how much I enjoyed Loyola. Fr. Baumhart was becoming the president, and he hired me for credit and collection. That led to the development office then to the director of Alumni Relations in 1971.

Bob: I went to law school at Northwestern, graduated in 1968, and practiced law for 26 years. I joined Loyola as a gift officer in 1996 and spent 10 years here. I eventually became director of Gift Planning and was director of Alumni Relations for a period of time. I moved on to do some other things, and then I came back in 2013 as alumni ambassador until retiring in June 2015.

Marty, why did you choose to spend your career at Loyola?

Marty: My undergraduate experience was so positive, I just wanted to come back here. I enjoyed the people, the work, and talking with alumni. My daughter Melissa went to school at Loyola and earned two higher degrees in psychology here. I liked Fr. Baumhart a lot, and he was the president for 23 years. We’re still friends now; he’s 91.

Do you have a favorite Loyola memory?

Marty: One of my favorite Loyola memories was in 1977, when I worked on the 25-year reunion. We made a major effort to get Bob Newhart to come back, and he did. I was the point person with him, on the phone with him, coordinating with him. What a happy experience it was for my wife, Carol, to meet Bob Newhart and his wife. They couldn’t have been nicer to us.

Bob: I remember how much fun we had going to the old Chicago Stadium to watch Loyola play basketball. My friends and I from Loyola and old friends from the South Side would go to all those games. We were in awe of the city of Chicago. We thought it was the biggest, greatest, and most powerful place on the face of the earth.

What do you do in your free time?

Marty: Quite a bit of the time is babysitting our grandchildren. On Thursdays, we go to the local Y in Irving Park where they have free swim. I’m also pretty active with my church, St. Edward, on the Northwest Side.

Bob: We bought a house on a small parcel of land up in Wisconsin a couple of years ago, and we spend a lot of time up there now. I try to read, and I write some, including about Loyola. I’m a lifelong and passionate basketball fan. I have a very strong appreciation of what Loyola has meant in our lives and what I think Loyola has meant to the city of Chicago.