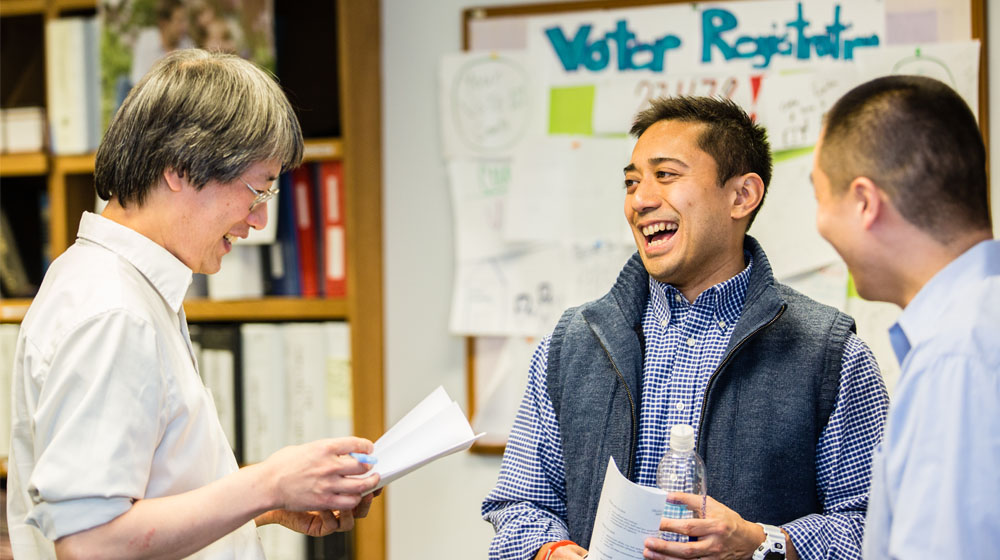 Lawrence Benito (MSW '98) serves as the chief executive officer at the Illinois Coalition for Immigrant and Refugee Rights (ICIRR).

I had just returned to the US from the Peace Corps in Ghana and wanted to do more international development work. Most people working overseas in development have master’s degrees. I was working with adults with developmental disabilities, and my supervisor there was connected with Loyola and encouraged me to apply in social work.

Everything they tell you about the Peace Corps is true. It was the hardest job you’ll ever love. It was the best decision I ever made and a humbling experience looking at America through the eyes of others.

I was interested in policy advocacy. One of my internships at Loyola through the Center for Urban Research and Learning was with the Fund for Immigrants and Refugees with people in the field doing community organizing. Through that experience, I decided that’s what I wanted to do.

I’ve spent the last 13 years at the Illinois Coalition for Immigrant and Refugee Rights (ICIRR). My experience growing up as a child of immigrants from the Philippines, seeing my parents’ experiences, and helping them find their voice shaped my life as an organizer. I wanted to educate people about public life and how laws are made and how people can organize themselves.

ICIRR is a statewide coalition of organizations that advocates on behalf of and with immigrants and refugees to impact immigration laws. We work to pass legislation that helps immigrants fully participate in public laws.

We’ve seen participant growth since the 2006 “megamarches” (a Chicago demonstration for immigration reform that catalyzed similar protests around the nation) in voter registration and turnout. Two years ago, we saw the passage of immigration-enforced legislation reform. We’ve had many victories at the state level.

I went to Catholic schools my whole life. It wasn’t until I started organizing that I realized the impact of my Catholic faith on social justice and my values. Nothing made me prouder to be Catholic than during the 2006 “megamarch.” I learned a lot about Catholicism through organizing.