"A Community of Blood: Jesuits, University Professors, and Worker Martyrs"

Rethink what your responsibility is to the truth.

That was the message Jon Sobrino, S.J., passed on to a packed Mundelein Auditorium on November 20. Sobrino, who helped found and taught at the University of Central America, was out of the country when the Salvadoran military killed six Jesuits, their housekeeper, and her daughter. Otherwise he very likely would have been killed as well.

“Our responsibility is to continue their struggle by speaking the truth and defending the poor,” Sobrino said.

For Sobrino, the martyrs’ deaths are a direct response to the work they were trying to accomplish during the country’s bloody civil war. The men were actively speaking out against the military’s brutality, political misdeeds, and the living conditions of the poor.

“Where we are tonight, it is important to remember that in our world today there continue to exist many victims who die from poverty, malnutrition, the absence or poor quality of health care, and from a lack of access to education,” Sobrino said. “There are innocent victims who die just because they live in dangerous places.”

Sobrino believes universities are in a position to fight for the truth and help the poor because governments and international groups often fail to address those issues.

After the martyrs’ deaths, Sobrino continued his work in Central America and has become a well-known liberation theologian. Before his address, Sobrino was presented with an honorary degree from Loyola for the work he has done as an educator, a scholar, and an advocate for the poor. 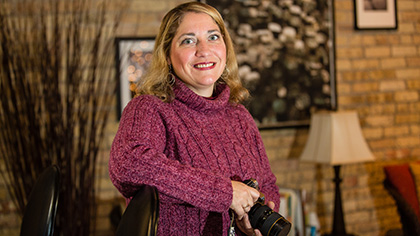 Kerry Obrist (BS ’91, MEd ’96), who is legally blind, works on behalf of others with disabilities.

Kerry Obrist (BS ’91, MEd ’96) was working as a school psychologist in Chicago’s south suburbs when she realized she was losing her vision faster than expected. Recognizing that some activities were going to become more difficult for her, Obrist decided to challenge herself.

“I specifically did things that were outside my comfort zone. I wanted to experience things that I thought I might not be able to do later on,” Obrist says.

She traveled to South Africa, Egypt, and Turkey. She participated in a 500-mile bike ride. She took up photography. She learned how to rock climb. She went downhill skiing.

“Which I probably shouldn’t have done,” she notes.

Obrist was diagnosed with a genetic vision loss condition at age 23, and by age 30, the loss was disabling. In 1998, when she became legally blind, she had to stop driving. She became unable to recognize faces. While Obrist’s vision loss made many things tougher, she says it changed her for the better in unexpected ways.

In a store, I have to ask someone if clothes match. I have to be more open to asking for help and being willing to admit I can’t do everything.”

Obrist went through rehabilitation, learning how to navigate the everyday by relying more heavily on her other senses, such as putting a key in a lock by mechanical memory, instead of by lining up what she saw with her eyes.

“It’s not like other forms of rehab—you’re not getting the vision back,” Obrist says. “It was just learning to use your mind in a different way. I’ve become a much better problem-solver. I have to be creative.”

Despite finding new ways of doing things and making resourceful adjustments, the vision loss made it challenging for Obrist to continue working as a school psychologist. Doing classroom observations of students from a distance and working with printed materials became impossible, and so Obrist left her position.

“It was frustrating, because I saw what I had been doing in a different light. I thought I was an effective school psychologist before, but I know I would have been even more so with the disability,” Obrist says.

She volunteered with various organizations and went on interviews, but found that employers seemed to lose interest once she disclosed her disability.

“After I divulged the issue, the atmosphere in the room would change,” Obrist recalls. “You could just hear the air go out. And it’s like, ‘Okay, thanks for coming in.’ And it would be over.”

But, after three years, Obrist found a way to turn her job-seeking experiences into an opportunity—for herself and for others. She started working at a nonprofit called Second Sense (at the time, the Catholic Guild for the Blind) which serves adults and children with vision loss. She worked as the education coordinator for two years, eventually becoming the director of services and developing career readiness programs that would help people with vision loss who wanted to return to the working world.

“I developed a program based on what I would have wanted during those three years without a job,” Obrist says. “I knew that I had the skills and the intellectual ability to do these jobs, I just didn’t know how to present myself to an employer. I think it was because, in the beginning, I had lost my confidence. I think I was defensive at times.”

She wanted to instill in those she worked with a sense of agency and confidence, along with practical tips—such as how to dress professionally for interviews. She also worked with senior citizens experiencing vision loss on how to navigate their homes and daily routines.

“We’re all human. We all have challenges. But we’ve all been given gifts,” Obrist says. “It’s that kind of attitude I want to share with other people who have been beaten down by life or the system or whatever. I think it really comes down to whether you perceive yourself as being in control of your life and your destiny, or if you’re going to be a victim of it.”

Obrist worked for Second Sense until 2009, when she started her own disability consulting business, consulting with various organizations about how to serve both customers and employees with disabilities.

“With a lot of advocacy organizations, the main goal is to get people with disabilities hired. We all need jobs. That’s all fine and good,” Obrist says. “But until employers and the general public are comfortable with people with disabilities, it’s an uphill battle. I had this brainstorm one day, and I thought, ‘I’m going to make these companies money.’”

Obrist thought if she could show companies how to welcome people with disabilities as customers, it would also go some way toward destigmatizing those disabilities. “Many Americans have a disability. It’s a huge market,” Obrist says. “And no one, or very few people, actually market to this group. People with disabilities need the same products and services. They want to go to dinner or the movies and enjoy life. But no one’s tailoring to them.”

Obrist has spent the last several years working to make organizations more open to and accommodating of people with disabilities. In 2014, she took a six-month position at DePaul’s Center for Students with Disabilities, working with staff to help them better understand their students and local employers to encourage them to think about hiring students or graduates with disabilities.

She also started a job club for students, helping them to hone interview and self-advocacy skills. Ultimately, Obrist says she is eager to continue her work helping others with disabilities and educating those without disabilities about how to be more accepting. She continues to create photography (pictured here), and her work has been accepted into numerous juried art shows. She also hopes to travel more, as she did when her vision had started to worsen, despite the challenges that might present.

“I’ve become much more of a risk-taker over the years than I was before I lost the vision,” Obrist says. “I think because I don’t take life for granted now, or what I have.”

Ramblers work as hard as they play

Loyola’s student-athletes achieved their highest-ever Graduation Success Rate score, according to the latest figures released by the NCAA. The Ramblers’ 96 percent GSR puts them in a tie for 16th nationally and is the highest among Missouri Valley Conference institutions. This marks the fifth consecutive year that Loyola has improved its GSR score.

The men’s basketball program compiled a perfect score of 100, the only MVC school with a grade higher than 90. It is one of six Loyola programs to earn the highest score, joining women’s soccer, women’s golf, women’s volleyball, men’s cross country/track and field, and national champion men’s volleyball.