Since it officially opened in 1994, the Women and Leadership Archives (WLA) has grown from a handful of collections to a home for over 150 collections that document women's lives and contributions. As the WLA looks toward the next exciting stage of growth, we look to the past and celebrate the dedication and work that created this unique institution.

From Mundelein to Loyola

Image: Carolyn Farrell, BVM, left, envisioned the WLA as a premier center for research on women. Ann Ida Gannon, BVM, right, was the namesake for the Gannon Center for Women and Leadership. She also served as the archivist for the Mundelein College Records in the early years of the WLA.

When Mundelein College affiliated with neighboring Loyola University in 1991, Sister Carolyn Farrell, BVM, President of Mundelein, and others immediately began planning for a center at Loyola that would carry on Mundelein’s legacy of women’s education and leadership. As part of what would become the Gannon Center for Women and Leadership, Carolyn Farrell, BVM and Loyola University librarian Ellen Waite envisioned an archives that would care for Mundelein’s records and collect other valuable collections on women and leadership.

Assistant University Archivist Valerie Browne enthusiastically joined Farrell and Waite in turning the dream of a premier center for research on women into a reality.  Browne began splitting her time between the University Archives and the fledgling Women and Leadership Archives (WLA) in 1992. "We had no staff, no space, no funding, and no collections," Browne wrote in a 2003 Gannon Center newsletter looking back on the experience. She worked to secure funding, develop necessary policies, and find potential records donors.

In 1994, Farrell announced that the WLA was officially underway thanks to a grant from the Kemper Educational and Charitable Fund. Along with funding the appointment of Valerie Browne as the WLA’s head archivist, the grant provided crucial seed money for shelving and equipment needed to create a strong foundation for the archives.

Image: Valerie Browne was the first Director of the Women and Leadership Archives. She began working to establish the archives in 1992 and continued to build the WLA as its director until her retirement in 2004.

In 1996, Valerie Browne was able to take on the fulltime position of first Director of the WLA. She continued to build the collections and reputation of the archives until her retirement in 2004.

Directors of the WLA

Along with the directors, a number of talented assistant archivists and part-time staff contributed to the growth of the WLA throughout its first 25 years.

The WLA grew out of the need to care for the records of Mundelein College after the women’s college affiliated with Loyola, but the vision soon broadened to collecting the records of women and women’s organizations.

During the first decade of the WLA, the Mundelein College Records were under the diligent care of Sister Ann Ida Gannon, BVM, a former president of Mundelein College, and Sister Jeanelle Bergen, BVM, former Mundelein faculty. Today, the papers, photographs, memorabilia, and audiovisual materials that make up the Mundelein College collection remain valuable and popular resources for alumnae and other researchers interested in the last women’s college in Illinois. In 2016, a grant from the Illinois State Historical Records Advisory Board helped fund a project to reorganize the Mundelein Records and create a finding aid to make the collection easy to use.

Image: Materials from the Polish Women's Alliance of America on display in the WLA's reading room.

The many other collections that make up the WLA began with Valerie Browne reaching out to Mundelein alumnae for support and connections to potential donors. Several Mundelein graduates themselves became the first donors including theologian Anne Carr, BVM, botanist and educator Alice Hayes, Ph.D, and labor activist Mollie West. Other early donors included Patricia Crowley, Women-Church Convergence, and Homemakers Equal Rights Association (HERA).

By 1995, over 40 individual women and organizations had committed their materials to the WLA.

Image: Members of Mary’s Pence visit the organization’s collection at the WLA. Mary’s Pence is an organization that collects and distributes funds to programs that serve those in need and empower women.

Today, the WLA’s holdings include over 150 processed collections covering art, education, social justice, politics, religion, and more. Numerous unprocessed collections donated in recent years will soon be added to this number to create an even more rich representation of the roles and contributions of women in Chicago, the Midwest, and the world.

The WLA has always been dependent on graduate assistants who provided support to the Director through processing collections, assisting researchers, and other archival tasks. The WLA has employed dozens of graduate students who have gained valuable training and experience to help begin their careers in archives and other fields.

Numerous interns and volunteers have also gained experience at the WLA while assisting with important projects.

Piper Hall: A Home for WLA

In its early years, the permanent location of the new archives was uncertain. The WLA temporarily shared space with Loyola University Archives in Cudahy Library and with the Gannon Center in the Sullivan Center.

Image: The WLA, along with the Gannon Center, has been located in Piper Hall since a renovation of the building was completed in 2005.

Thanks to a generous donation from Virginia Piper and support from alumnae, the historic mansion known as Piper Hall underwent major renovations beginning in 2000. Upon its completion in 2005, the restored building became the home of the Gannon Center and the WLA.

Built in 1909 as a private residence, the white marble mansion by the lake was purchased by Mundelein College in 1934 to serve as a library. Carolyn Farrell, BVM, the last president of Mundelein College and first Director of the Gannon Center, noted that the use of Piper Hall as a space for the Gannon Center and WLA would, “hone the architectural and academic traditions of Mundelein while responding to future needs of the students, researchers, alumnae, faculty and friends who use the center’s many resources.”

Along with making records available to users, the WLA pursues opportunities to serve the community and creative ways to make its unique collections accessible to a wider audience.

The archives has collaborated with partners such as the Illinois Labor History Society, Black Metropolis Research Consortium, the Legion of Young Polish Women, Chicago History Fair, and Loyola’s Center for Textual Studies and Digital Humanities on projects that help preserve valuable records and make them available through programs and digital resources.

Image: Undergraduate students from the Anthropology department examine records at the WLAin 2015.

The WLA hosts undergraduate and graduate classes every semester to introduce them to archives and the diverse WLA collections. These class visits give students from a variety of departments the opportunity to interact with primary sources that relate to their fields of study.

In 2001, The WLA and the Gannon Center awarded the first Summer Research Grants to three Ph.D students. The purpose of the grants was to support scholarly research and to encourage research on women and their contribution to society by utilizing the holdings of the Women and Leadership Archives (WLA). The program continued through 2016 and awarded over 20 grants to support the research of students and faculty from Loyola and other institutions.

Focus on the Book

In 2017, the WLA joined with Polish Women's Alliance of America, The Newberry, Loyola’s Interdisciplinary Polish Studies Program, and Loyola Libraries to host Dr. Helena M. Pycior, Professor Emerita, author of Marie Skłodowska Curie: Piecing Together the Historical Puzzle for the Fifth Annual Focus on the Book event. Attendees joined in a discussion with Dr. Pycior on her book and research, as well as viewed items related to Marie Curie from the WLA's Polish Women's Alliance Collection. 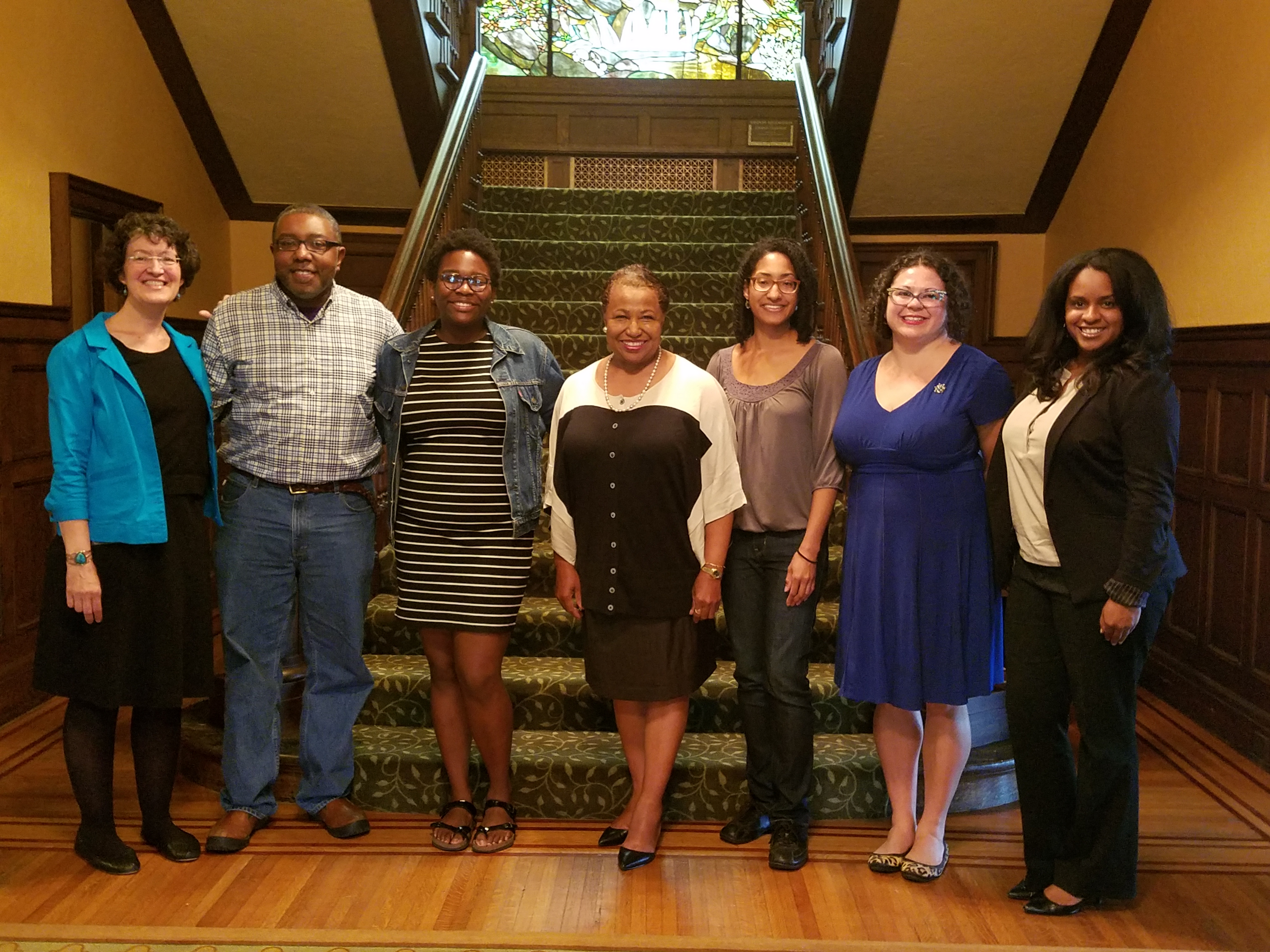 The WLA partnered with the Black Metropolis Research Consortium on their 2017 Archie Motley Archival Internship Program. This program is designed to provide students of color with opportunities to gain practical work experience in archives management, and to recruit students of color into the archives profession as a means to address the critical issue of the underrepresentation of people of color in the field. Two interns worked at the WLA on processing the papers of Carol Moseley Braun, the first female African American U.S. Senator.

The WLA uses the internet as useful tool to provide broader access to archival collections. Collections of scanned documents and photos are accessible on the WLA website, along with digital exhibits that tell the fascinating stories of individuals and organizations from our collections. These projects require significant time and resources and are completed with support from donors and partners. In 2018, the WLA staff began the Mundelein College Photo Digitization Project, are scanning and inputting data for each of the thousands of photographs and slides in this large collection so that they can be viewed online.

Look to the Future

Now, with a new Director to be hired in 2020 and newly donated materials adding to the diversity of collections, the WLA looks forward to continuing its commitment to collecting, preserving, and sharing the stories of women’s lives and contributions.

Want to learn more and support the Women and Leadership Archives?

Email us at wlarchives@luc.edu for more information on how you can get involved at the WLA!