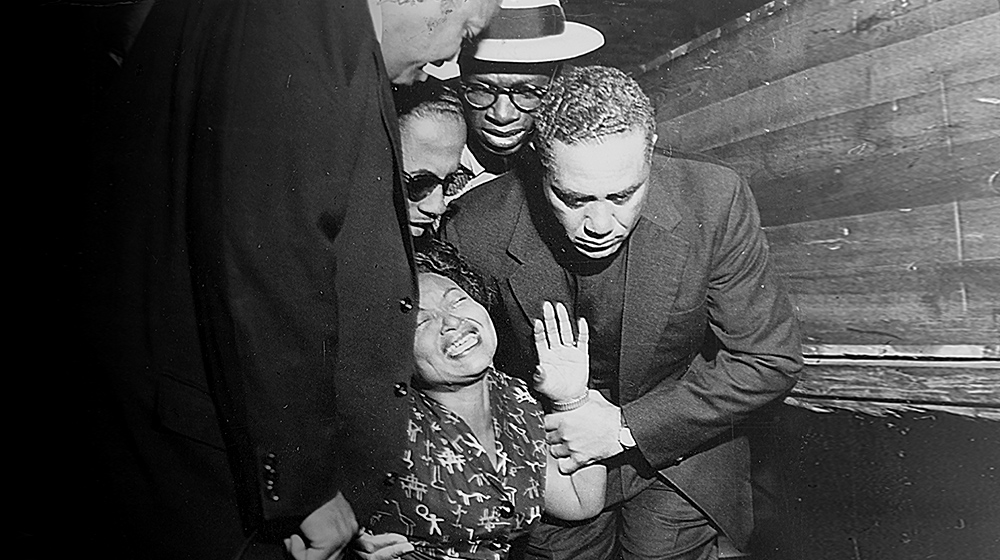 Mamie Till Bradley reacts as her son's body arrives back in Chicago. (All historic photos courtesy of the Library of Congress, NAACP collection)

The Emmett Till murder A picture is worth a thousand words

“...In late August 1955, a fourteen-year-old Chicago kid named Emmett Till went to visit family in Mississippi. At a crossroads store in the tiny Delta town of Money, Till whistled at the white woman behind the counter. A few days later, he was kidnapped, beaten, and shot. His abductors weighted his body down and threw it in the Tallahatchie River...When Mamie Till Bradley saw how savagely her son had been beaten, she asked the mortician not to prettify him, and more, she insisted on a glass top over his coffin. ‘Let the people see what they did to my boy,’ she famously said.”

The book Let the People See: The Story of Emmett Till is both an examination of the Till case and of the problem of race in twentieth century America. Here, Professor Elliott J. Gorn discusses why it was important for Till’s mother to show his body to the public, how the Till story resonates today, and what he wants readers to take away from his book.

In one excerpt you quote Mamie Till Bradley, Emmett Till’s mother, as saying, “Let the people see what they did to my boy,” in essence the title of your book. Why is that so meaningful?

First of all, it was a terribly hard thing to do. We know today the parents, for example, in any of the recent school shootings haven’t been willing to do it. That’s understandable. To let the world see the brutalization of your own child and to know that the publicity will continue makes it so hard. But Mamie Till Bradley decided that it was important to try to let the world see the violent result of white supremacy, to not let people look away. As it turns out, 100,000 people came to Emmett Till’s funeral. The photo of his body in Jet magazine and The Chicago Defender and the other African American newspapers saddened and enraged African Americans. The impact of these images lasted for years. Parents passed the story on to their children. Civil Rights activists were galvanized by the photos, and referred to themselves as “The Emmett Till generation.” And in our own day, just two years ago when someone scrawled the N-word on LeBron James’s fence on his home in Los Angeles, the first thing he thought of was Mamie Till Bradley, and he called a news conference to talk about it, to not cover it up. So the Till story continues to resonate for people. 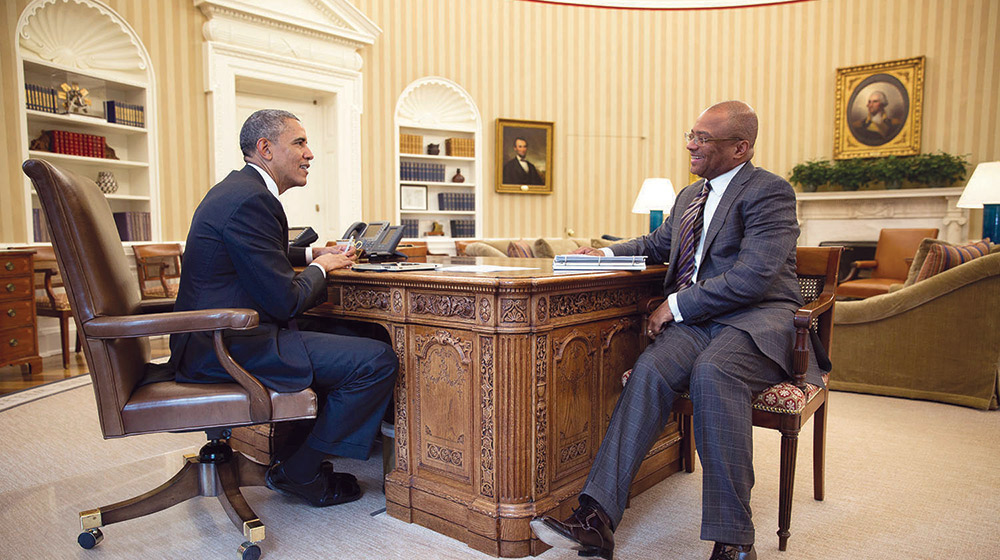 “There was a set of low expectations all along the way in my own life that I had to overcome or resist or ignore, whether it was going to college or law school, or in the years since.”

Read more from an interview with Broderick Johnson, who served on President Barack Obama’s Cabinet and spearheaded the My Brother’s Keeper Task Force. 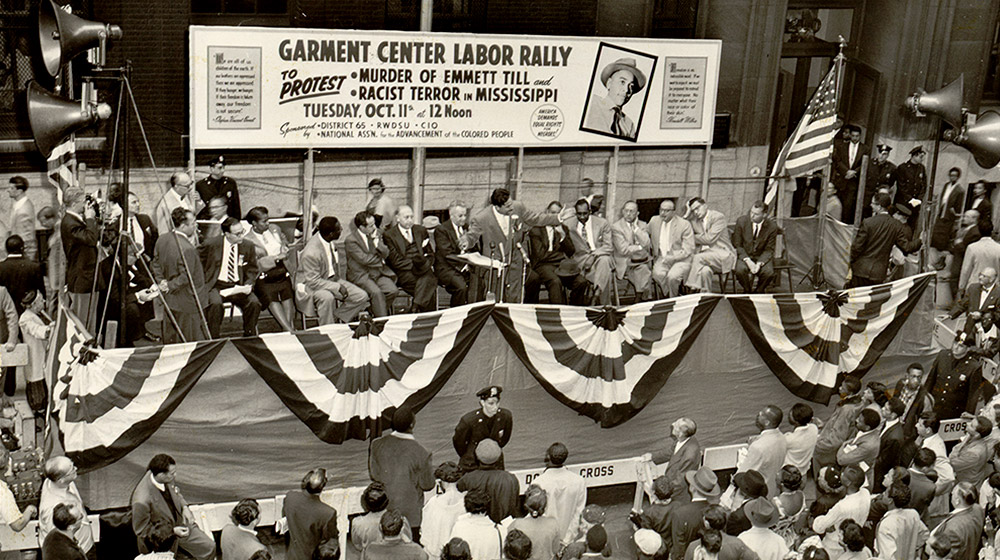 — Elliott J. Gorn on Let the People See: The Story of Emmett Till

Do you think that was the beginning of the realization that visual imagery has the power to bring social awareness of the violence against black men, black people in the U.S.?

It’s certainly important. It’s a complex story of that photo of Till’s body, who saw it and who didn’t. Back in 1955, the African American magazines and newspapers printed it, not the “mainstream” press. For decades, few white people ever saw the photos of Emmett Till’s body. They only began to see it 30 years ago in Eyes on the Prize—the civil rights movement documentary that first aired on American television in 1987. That’s the first time the photo appeared in the mainstream media and for a national audience. But for African Americans, the photo mattered immediately, much like the case of Laquan McDonald. Film of his death meant everything in that case. For both Till and McDonald, photographic evidence mattered profoundly.

In the book you talk about the “facts” and “truths” that were outright lies of the Emmett Till story. Why is that an important element to the story?

It’s important because America still struggles with race. We have a hard time even with just the facts of race. In the Till story, people were very partisan in how they told the story. Was it a lynching? Or was it a couple of guys got drunk and committed a murder? Well, that’s a deep and important question that’s filled with issues about justice and morality and so on. So getting at the facts as best we can, really does matter. It matters what Carolyn Bryant Donham [the white woman who said that Till attacked her] said: whether this 14-year-old used obscenities, laid hands on her, or propositioned her. It matters if that’s true or not, and it’s mostly not true. So “the facts” are essential, but even if you get them right, you still don’t get the whole story, because race throughout American history is a highly charged, emotional issue.

Finally, what do you want people to get out of your book? What are the takeaways?

I want them to remember the story. I don’t want it to be forgotten. As a writer, my main obligation is to the subject of the story, to Emmett Till, to his mother, to the story and what happened. It’s not to show my ideas about it. It’s about being fair and being as judicious as I can to those involved. It is an African American story, and a Southern story. But it is above all an American story because it is about racism. And that’s our story unfortunately. You’ve got Laquan McDonald, Trayvon Martin, Michael Brown; we could go on and on. I want people to think about those people. There’s a reason why, when Trayvon Martin died, almost immediately there was a meme on the web, a picture of Trayvon and Emmett, arm in arm. And, when Michael Brown died, reporters often opened their stories talking about Emmett Till. It’s not an exact parallel, but there is a way in which Emmett Till is like Anne Frank. The story of his death has become shorthand for the horrors of white supremacy. If the death of an individual is a tragedy while the death of million is a statistic, then the Emmett Till story allows us to begin to grasp the tragic history of race in America.

Excerpt from Let the People See: The Story of Emmett Till

Depending on who told it, where, when, and why, Emmett Till’s story was filled with ambiguity, distortions, even outright lies. Whole books have been written about the murder expressly to test and debunk some of the “facts” that have grown up and around it—among them, that Emmett’s cousins egged him on to whistle at the white woman at Bryant’s Grocery Store; that Emmett bragged about his white girlfriends back in Chicago; that Emmett acted belligerently toward his captors. Getting the facts straight is a worthy goal for its own sake, but also because truth is a precondition of justice.

Still, to seek only the literal truth misses something larger about Emmett Till’s story, which is never simple, never reducible to mere facts. Even things we know as a stone-hard truth—that white men savagely beat a black boy, then executed him for reasons seem trivial—has mystery at its core: How can we comprehend this blend of sadism and bigotry? Where does such evil come from? How could whole communities, whole states, a whole region rationalize the atrocity? As is always true of the past, the literal truth takes us only so far in exploring moral questions, the very heart of historical studies.

The Emmett Till story is an American Rashomon, for how it was told in 1955 or 1985 or 2015 depended not just on “the facts” but on what you believed they were, what they ought to be, and above all, what they meant. Of course, it is the historian’s duty to get the facts as accurately as possible. Not all versions of a story are equal; some claims are demonstrably false, shamelessly prejudiced, self-serving. Some tellings are fuller, richer, and more accurate than others. That there are things we can never know for sure, however, is also a fact, and understanding how people try to fill those gaps carries its own kind of truth.