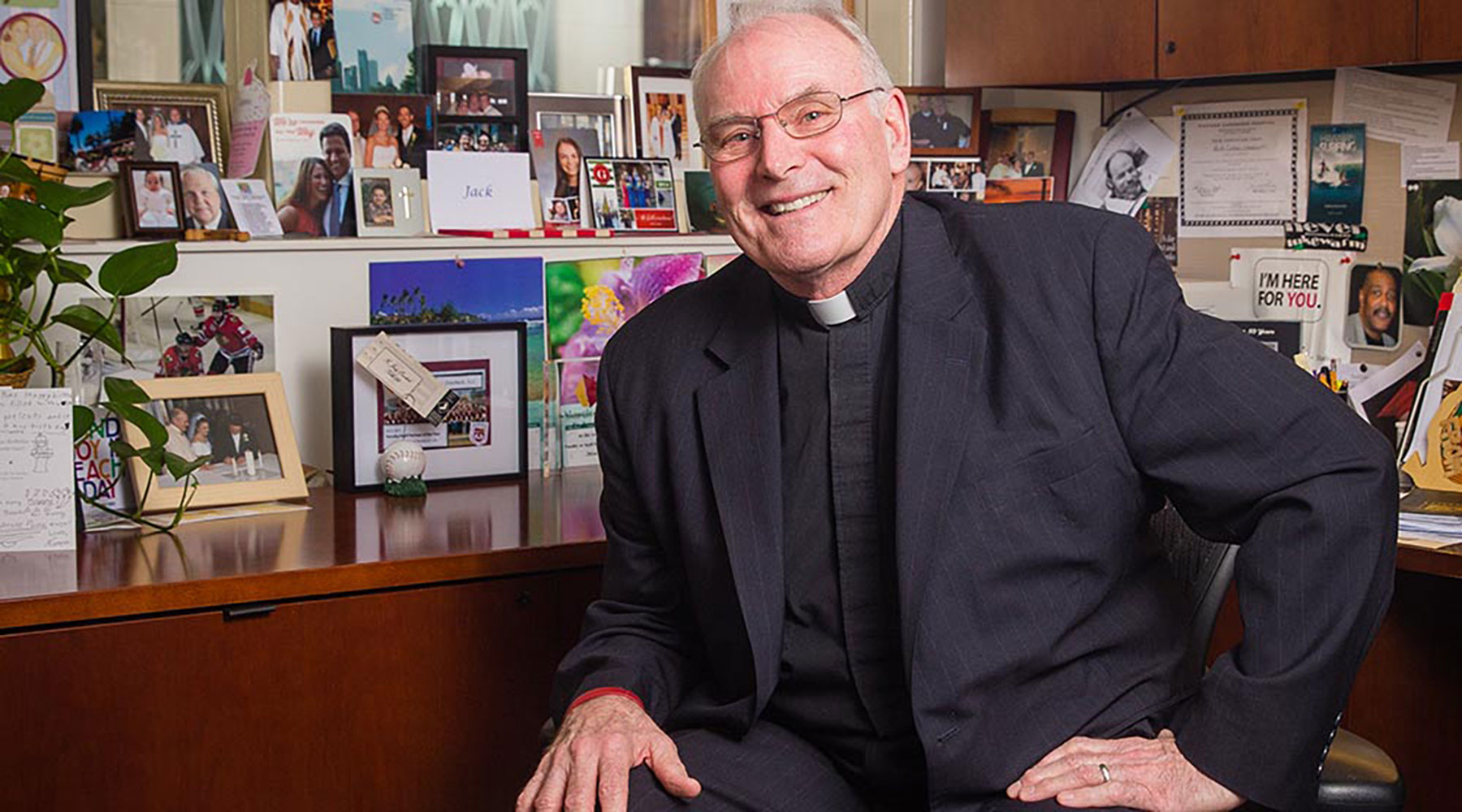 Jerry Overbeck, S.J., sits in his office on the third floor of the Terry Student Center surrounded by photos and mementos of the many friendships he’s made over the years at Loyola University Chicago. (Photo: Natalie Battaglia)

No matter which name you know him by, he’s Rev. T. Jerome Overbeck, S.J., a beloved chaplain and professor who has been a part of Loyola University Chicago since August 1976. He’s comfortable with whichever name people use; he’s just happy to be talking to them.

Ignatian Heritage Month is Loyola's annual celebration of our Jesuit mission of service and care for others. Read more stories about our Ignatian heritage.

Above left, Father Overbeck is pictured with students in his Mertz residence hall room in 1999 (photo courtesy University Archives). Above right, he spends a fall day with the children of alum Troy Fleming during a recent family trip to a pumpkin patch (photo courtesy of Jerry Overbeck).

At Loyola, Overbeck has taught courses on theology, anthropology, counseling, and social work. His official titles have varied over the years, including professor, University Liturgist, and chaplain of the schools of law and social work, his current role. He’s such a fixture, in fact, that Lu’s Deli and Pub in the Terry Student Center even named a sandwich after him—the “Fr. J.”

“He’s a common thread through a lot of Loyola experiences.” — Maria Calsin (BBA ’93)

The Calsins remember encountering Overbeck for the first time at the 10:15 p.m. Sunday Mass as undergraduates. They found his homilies relatable and relevant. When the couple got engaged, Overbeck was a natural choice to preside at their wedding. That would be the first of many sacraments he would perform for the Calsin family: he’s baptized all three of their sons, heard the boys’ first confessions, and gave them their First Communion. The family’s eldest son, Jack, even asked Overbeck to be his confirmation sponsor.

“It was what we needed and it gave such peace and comfort to us, we had already spent some years together, and this was something that now binds us for a lifetime.” — Dawn Fleming