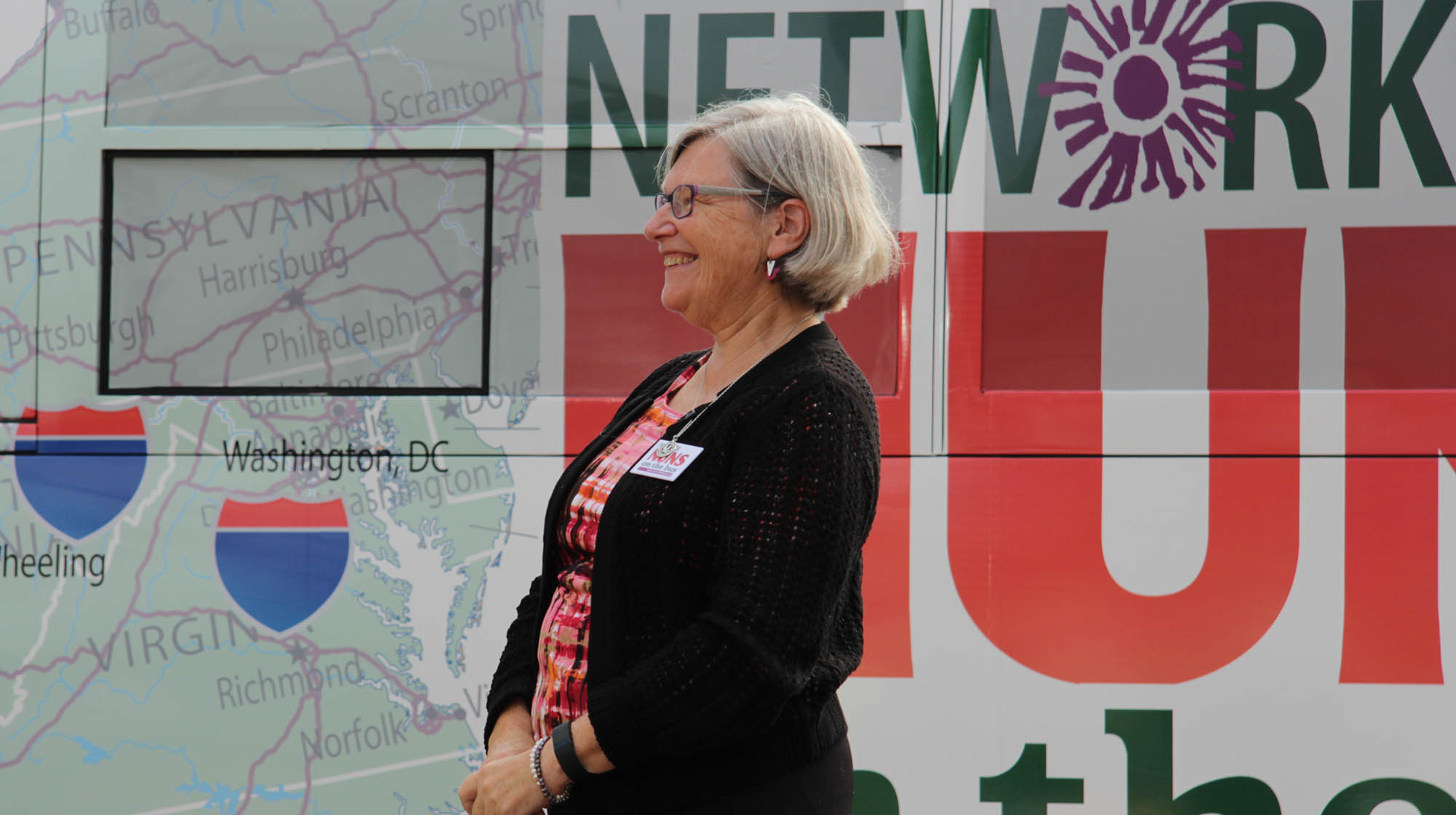 As the leader of the Nuns on the Bus campaign, Sister Simone Campbell has helped to educate people on issues of social justice and mobilize more Americans to vote. Campbell spoke to Loyola graduates at the 2018 commencement ceremony for the Graduate School and the Institute for Pastoral Studies. (Photo: courtesy of NETWORK)

Sister Simone Campbell has appeared on 60 Minutes, The Colbert Report, and The Daily Show—not the usual territory for a Catholic sister. But Campbell gained fame as the face of the Nuns on the Bus campaign, a series of cross-country road trips focused on economic justice, immigration reform, and voter turnout.

A member of the Sisters of Social Service, Campbell has spent her entire career advocating for social justice. Since 2004, she has served as the executive director of NETWORK, a DC-based Catholic lobby for social justice that educates, organizes, and lobbies for economic and social transformation. In addition to being a religious leader, Campbell is also a lawyer who has served for 18 years as the lead attorney for the Community Law Center in Oakland, California, which served the family law and probate needs of the working poor.

After giving the address at this year’s commencement for The Graduate School and the Institute for Pastoral Studies, was asked Campbell about her approach to advocacy in today’s polarized times and what keeps her committed to speaking out for social justice:

How did you come up with the Nuns on the Bus concept?

In 2012, NETWORK received some unexpected media attention after a censure from the Vatican. My prayer at that time was, "How do we use this moment to further our mission?" So we had the idea of going on the road to push back against the proposed budget at that time, which would have decimated programs for people in need.

We picked a very serious title, “Nuns Drive for Faith, Family, and Fairness,” but our graphic designer thought that was the tagline, praise God, so he designed a logo that said, “Nuns on the Bus: Drive for Faith, Family, and Fairness.” When we got it back, I just had to laugh, because that’s what it is, even though we had tried to be so serious. And since then, Nuns on the Bus has become a big thing. It was a humbling, surprising, amazing journey that was so much a gift of the Holy Spirit.

What has Nuns on the Bus taught you about getting people involved in the political process?

The bus provides community for folks that are hungry to be connected. The bus is about joy, and in challenging times, the joy of being together is something that I think people are really hungry for. On the third trip, which was about voter turnout, we started a ritual of signing the bus itself. If people committed to vote for the common good, they signed the bus at the end of our events. By the end of the trip, it was no longer just nuns on the bus—it was everybody on the bus, all committed to the common good.

How do you navigate advocating for social justice in this highly polarized moment in history?

For me, it’s really telling the stories of people I’ve met and engaging others in their stories. Right now, we’re fighting the big fight to keep funding for SNAP (supplemental nutrition assistance program). In Milwaukee, I met Billy and his wife, who work full time but have to use all their salary to keep a roof over their and their two kids’ heads. They use food stamps to feed their boys during the day—you know boys in the middle of a growth spurt, they devour everything in sight—and then go to a soup kitchen at a local parish for dinner.

Billy told me his dream is to be able to buy his kids new school clothes, because they have only ever had hand-me-downs. In this polarized, politicized world, Billy’s story cuts through a lot of that. It is not just an anonymous dollars and cents thing—we’re talking about families who are working and caring for small kids, or the disabled, or the elderly.

In your commencement speech, you said, “Currently, our nation is caught in a huge struggle between either individualism or a common good, a common dimension of democracy. I’m welcoming you to this next step and urging to use your gifts, your knowledge, your Loyola training, to work for the communal dimension of the common good.” Why did you choose this message for the graduates?

There is this message that the wealthy should accrue wealth and hoard it, take care of themselves. There’s no sense of responsibility for each other—it’s like survival of the fittest. But that’s the antithesis of the Gospel. The Gospel is all about welcoming everybody in, “Come to me all you who labor and are burdened.” So I thought that message helped convey how we walk in this very challenging world with some hope. And we can only do that together.

You also quoted an exhortation from Pope Francis to learn from others. Why is that important today?

That is the key, to know that I’m not the holder of all knowledge. And students, especially at the graduate level, they know that all of their research and engagement is built on what’s gone before. They have this learning, and it needs to be applied as shared problem solving to accomplish a shared goal. We need to engage the challenges of our time willing to learn from those around us.

Ignatian Heritage Month is Loyola's annual celebration of our Jesuit mission of service and care for others. Read more stories about our Ignatian heritage.